Sign Up
Log In
Purchase a Subscription
You have permission to edit this article.
Edit
Home
News & Features
COVID-19 Vaccine
Sports
Opinion
Obituaries
Photos
HD Media LLC
Share This
1 of 3 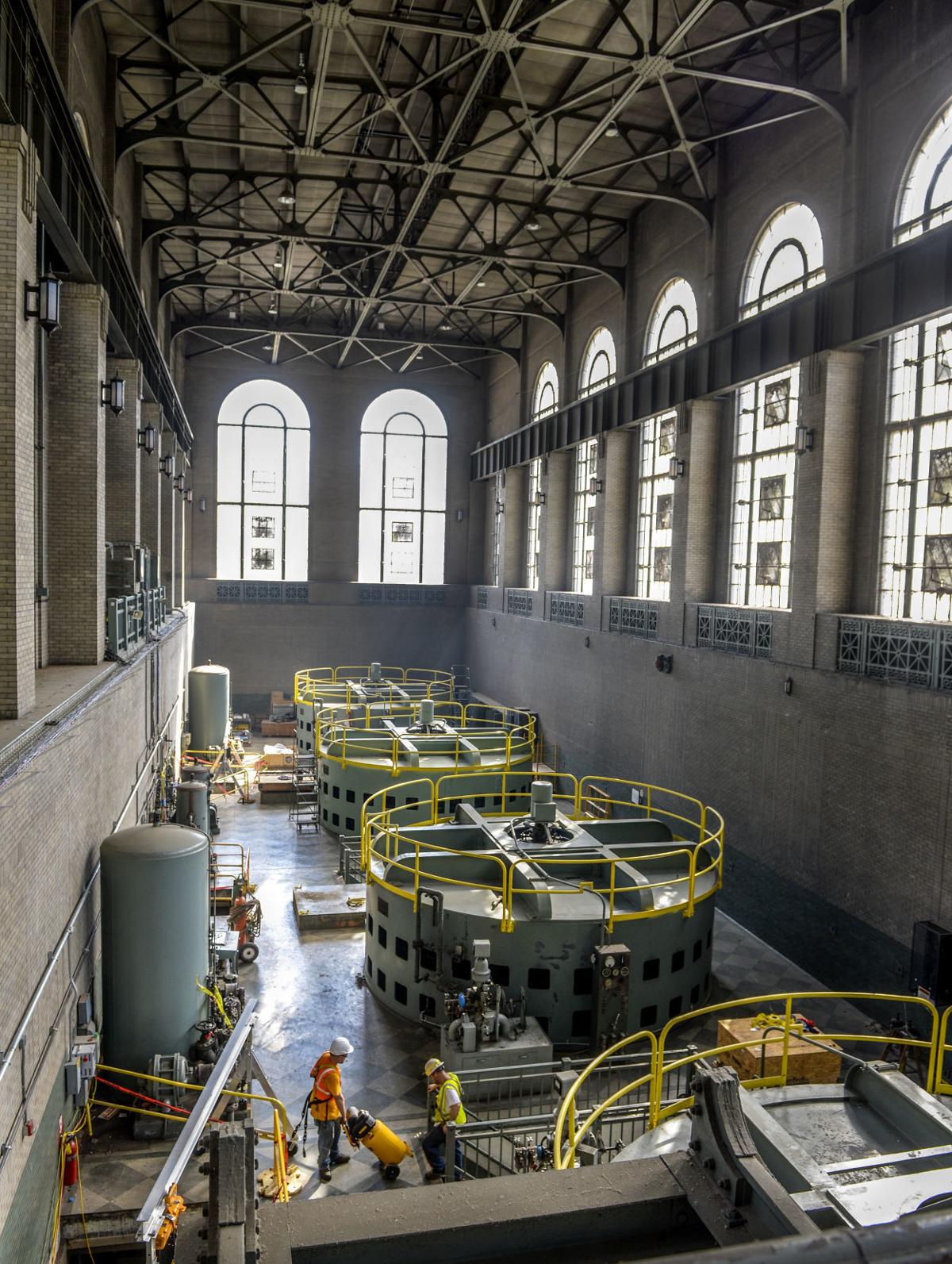 With three of the Hawks Nest Power Plant’s four turbines behind them, workers prepare to bring equipment to a repair site at a lower level of the powerhouse. 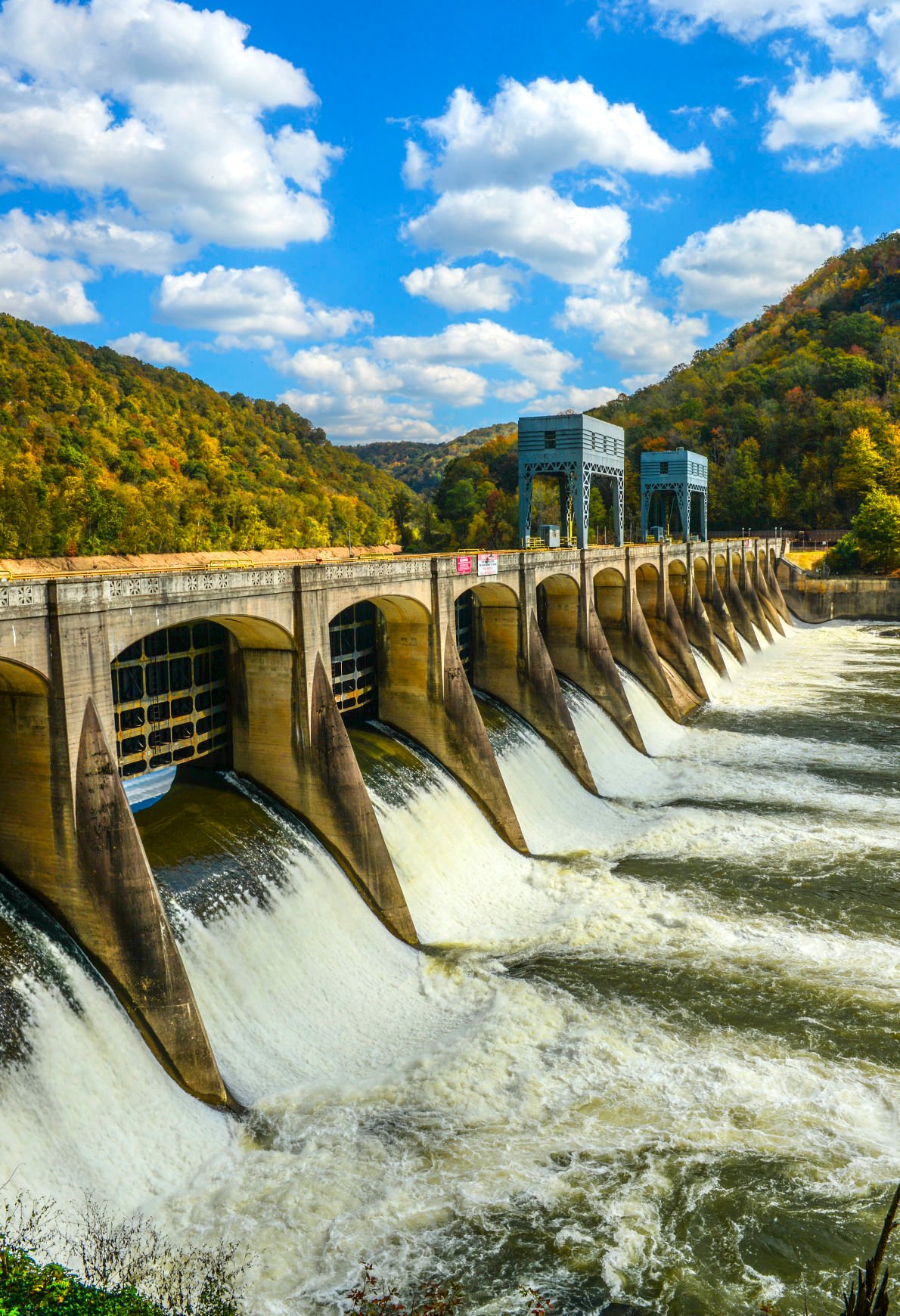 The full flow of the New River passes through the gates of Hawks Nest Dam as the Hawks Nest Tunnel is dewatered and inspected and maintenance work performed on other components of the Depression-era hydropower complex. 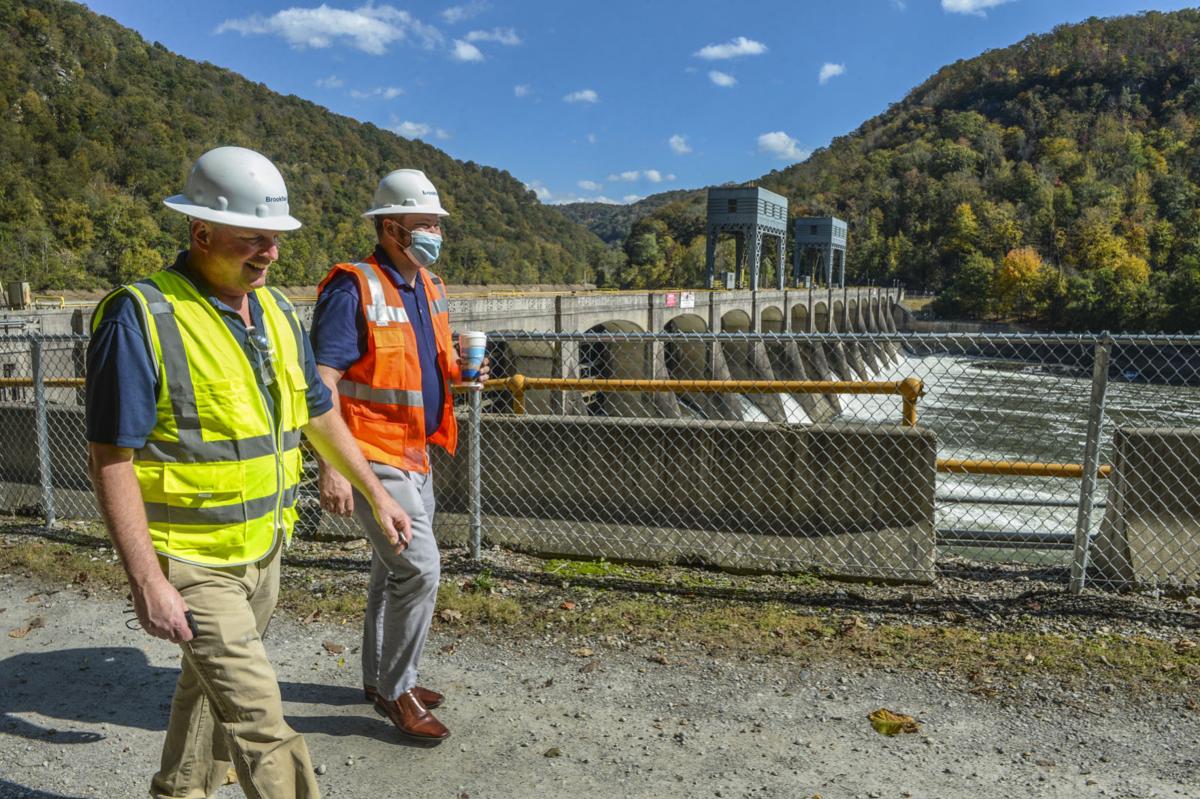 With three of the Hawks Nest Power Plant’s four turbines behind them, workers prepare to bring equipment to a repair site at a lower level of the powerhouse.

The full flow of the New River passes through the gates of Hawks Nest Dam as the Hawks Nest Tunnel is dewatered and inspected and maintenance work performed on other components of the Depression-era hydropower complex.

GAULEY BRIDGE — For the first time since 1936, no water flows through the 3.1-mile long Hawks Nest Tunnel, leaving the hydroelectric turbines at the power plant it serves idle.

On Sept. 8, the gates at Hawks Nest Dam were opened to let the full volume of the New River flow into the Dries, the 6-mile-long final reach of the New River, starting the process of draining the tunnel. Normally at this relatively arid time of year, most of the New River’s flow is diverted into the tunnel and onto the power plant, while just enough water to sustain fish and other river-dwelling animals passes through the dam and into the Dries.

“Until now, the tunnel has never been dewatered,” said Kevin Moriarty, area operations manager for Brookfield Renewable, the Canadian company that owns the Hawks Nest dam, tunnel and powerhouse.

The hydropower project, still West Virginia’s largest, “has had a good, productive life for more than 80 years,” Moriarty said. “We thought now, rather than later, was the time for a check-up and to make a few repairs to make sure it’s good to go for the next 80 or 100 years.”

To accommodate the work, Hawks Nest Reservoir has been lowered 25 feet and will remain at that level until Nov. 11, when the dam will resume holding back most of the flow now channeled into the Dries to bring the lake back to its normal level.

While no person has set foot in Hawks Nest Tunnel since it began carrying water 84 years ago, the current drawdown has allowed it to be inspected robotically, using both submersible and land-roving remotely operated vehicles. The tunnel will be examined again by the ROVs as it refills with water.

Cameras and other sensing gear on the ROVs showed the tunnel “looks like it did in the 1930s,” Moriarty said. When asked if the ROVs came across anything interesting while traversing the tunnel, he replied, “They found nothing at all.”

Work being done during the drawdown includes repairs and the installation of new seals to isolation valves below the power plant’s turbines, and repairing and replacing concrete panels that contain water at the project’s surge basin.

“The craftsmanship and design that went into this project is awesome,” said Moriarty. Gates at the dam and tunnel intake that had not moved in decades were raised and lowered smoothly and were in good working condition, he said.

“I’m amazed that crews started on the tunnels at three or four different places, and when they were done, all the tunnel sections matched up perfectly,” Moriarty said. According to a press account of the completion of the tunnel in December 1931, the centerlines of the final two segments came within an inch of joining at the point called for in blueprints.

The $9 million, 102-megawatt hydropower project, built to power a new Union Carbide electrometallurgical plant at Alloy, was considered an engineering marvel when construction got underway in 1930. At that time, it was the largest construction project in West Virginia history, and its 3-mile long tunnel was the longest ever built for a U.S. hydro project.

No time was wasted during its construction phase. Groundbreaking took place just 18 days after the Rinehart and Dennis Co. of Charlottesville, Virginia, was named the successful bidder. Nearly 5,000 men were hired as laborers, with about half of them spending at least part of their workdays in the tunnel, where they worked 10-hour shifts, six days a week.

The tunnel was completed in 18 months, well ahead of schedule. Once it was connected to a completed powerhouse and power was transmitted to the Alloy plant, it took only nine years for Carbide to recoup its $9 million investment, according to Dr. Martin Charniack’s 1989 book, “The Hawks Nest Incident.”

It was a different story for those who toiled in the tunnel, where exposure to silica dust from drilling into the sandstone of Gauley Mountain began to produce disability and death within months. According to a study by the National Institute of Occupational Safety and Health, those who employed the tunnelers did not provide adequate ventilation, issue respirators or use wet drilling practices to reduce dust.

By the time the project was complete and the dust had settled, hundreds — possibly a thousand or more — of the tunnel workers, most of them Black, had died, or were dying, from silicosis. Death estimates range from 476, reported in 1936, to 764, the result of a 1986 study by Charniak, an epidemiologist, to 1,000, the result of a 2002 NIOSH study.

By 1937, 46 states had passed laws offering protections to workers dealing with silica dust and silicosis.

Meanwhile, the Hawks Nest hydro project’s renown as an engineering success endures. It has functioned reliably, with few maintenance issues, for nearly nine decades. Although it has but one customer, now WVA Manufacturing LLC, it remains the largest hydropower operation in West Virginia.