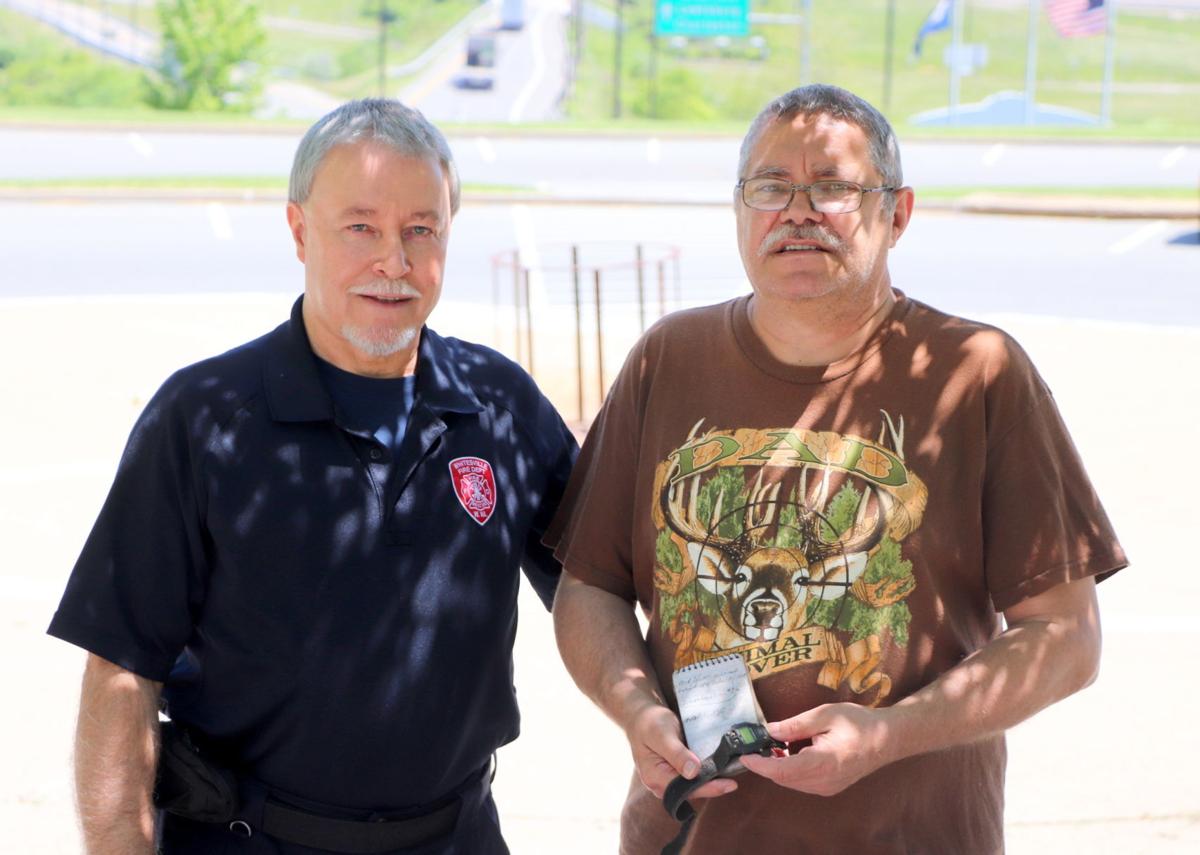 Whitesville Paramedic Terry Vermillion recently met James Woods, a man he helped save at the Upper Big Branch Mine disaster. 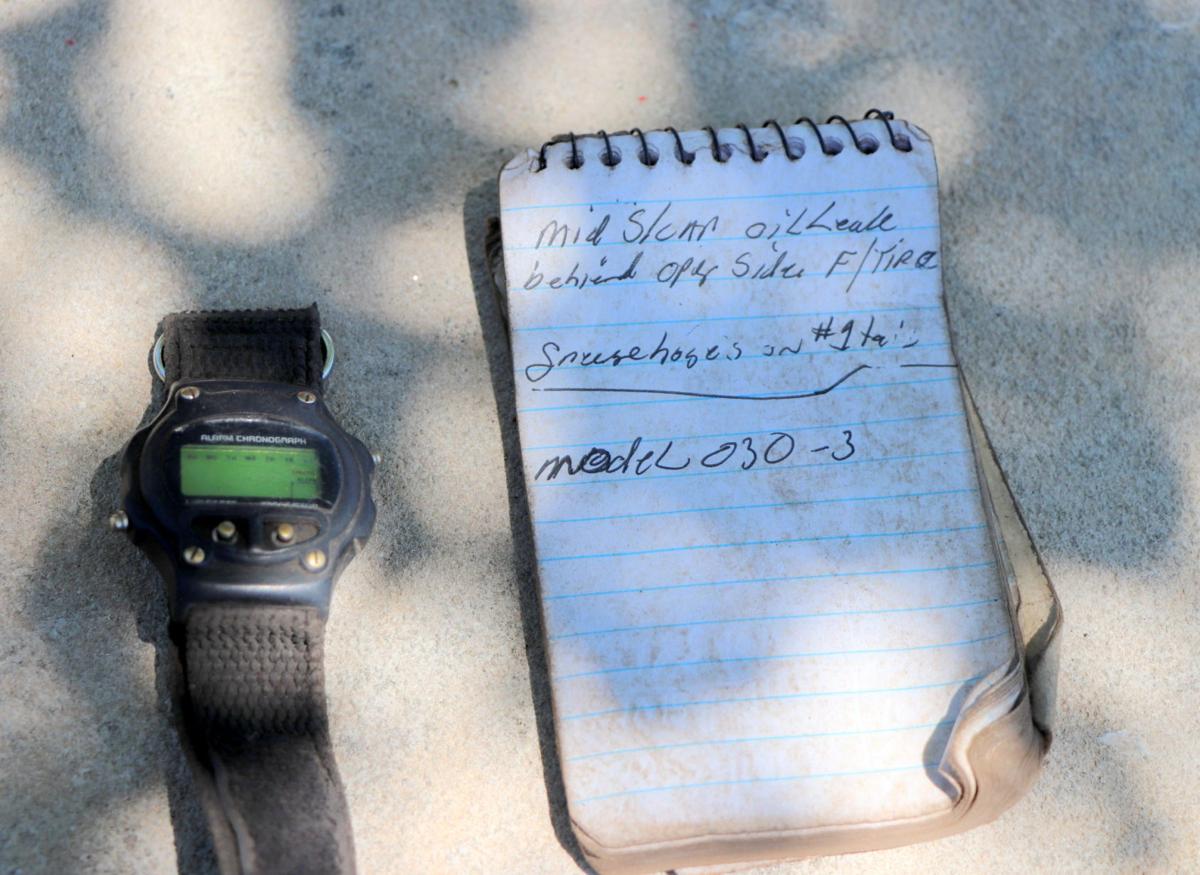 Whitesville Paramedic Terry Vermillion returned this wrist watch and spiral notepad to the family of James Woods — items Vermillion has held onto since the Upper Big Branch Mine disaster of 2010.

Whitesville Paramedic Terry Vermillion recently met James Woods, a man he helped save at the Upper Big Branch Mine disaster.

Whitesville Paramedic Terry Vermillion returned this wrist watch and spiral notepad to the family of James Woods — items Vermillion has held onto since the Upper Big Branch Mine disaster of 2010.

BECKLEY, W.Va. — Whitesville Paramedic Terry Vermillion has carried something with him since April 5, 2010, that doesn’t belong to him — and last week, he was able to return it to the rightful owner.

“I can’t really put into words how good it feels to be here right now,” said the EMS worker. “Finally, these items are back where they belong.”

While starting a fluid IV, Vermillion removed the watch from the wrist of mine electrician and U.S. Army Veteran James Woods, who had been critically injured in the Upper Big Branch Mine disaster. Vermillion also recovered a small, spiral notepad that fell from Woods’ pocket before he was transported by air to a hospital.

For 10 years, Vermillion has kept the items zipped up in a clear freezer bag, hoping that one day he’d meet the man he helped save on that day where 29 miners died and two, including Woods, were injured.

Interestingly, Vermillion said, he’d look at the items from time to time and the battery in the watch lasted until about a year ago.

The recovery effort from multiple agencies from multiple counties and states endured for days at the Raleigh County site, owned by Massey Energy.

On May 27, 2020, the Coal Valley News published a story about Vermillion’s nearly four decades of service to the Boone County community of Whitesville and surrounding areas. In that story, the paramedic expressed a desire to reach the family of Woods and return the items.

Self-described as “very private,” the Woods family has not spoken to any media sources since the 2010 disaster and chose to live a quiet life in the Beckley area where they could move past the memories of that day.

However, the Woods family read the CVN story and granted Vermillion his wish, agreeing to meet with him in Beckley to help the paramedic find closure to something he’s carried with him for a decade.

“When I heard about the story, we just wanted to do this for him (Vermillion),” said James Woods’ wife, Teresa. “Our family has been through a lot and it is very hard to talk about. We wanted to thank him. It just shows how much he cares.”

Teresa Woods has served as a caregiver for her husband, who suffers from a traumatic brain injury that has robbed him of both short- and long-term memory and left him — according to his wife — with the mental capacity of a second-grade student. James Woods can’t remember working at Upper Big Branch Mine. He can’t remember the day that changed the lives of his family forever, but his wife remembers vividly.

After all, their son Jeremy Woods escaped the mine safely as it was moving through a shift change, with his father still inside the mine when the explosion occurred.

“It was an ordinary day,” she said. “He left the house at 4:30 in the morning because it was an hour-and-a-half drive. My daughter-in-law’s neighbor worked the hoot owl (shift) and she told me. They never once called. I didn’t receive a call from his employer. My son called and said that they had taken him to Charleston.”

Jeremy Woods was separated from his father that day because he left the mine to retrieve something and was going to return. His father was operating the mantrip, a shuttle for transporting miners underground. Today, Jeremy is out of the mining industry and works as a truck driver. According to his family, he suffers from post-traumatic stress disorder.

His father’s anoxic brain injuries were significant; he endured brain surgery after considerable swelling nearly took his life that night.

“His chest was badly bruised from (first responders) trying to save his life,” she added. “We moved to North Carolina so he could be seen at a brain institute. He went to work that day and didn’t come home for a year.”

His wife added that the media requests for her family the night of the disaster were overwhelming. They denied every single one of them — including requests from then ABC News Anchor Diane Sawyer and television/radio legend Larry King.

Sherry Lilly said it was a very stressful time for the family and it was hard for her parents to make the temporary move.

“Mom got an apartment near the facility so she could be with Dad,” she said.

Teresa Woods said it was a lonely time as she looks back on those days.

“We had no friends,” she said. “I had a cousin and a couple of people from church and my children. He’s been home for nine years and nobody has come to see him. The other survivor came once. He had one other guy come but other than that, nobody has called or come to see him, like they don’t care.”

She added, “He thought he had all kinds of friends, but apparently he didn’t have any. If he were to pass away, I wouldn’t have a service or a funeral. If you can’t come see him alive, why are you coming to see him when he’s dead?”

As wife and caregiver, Teresa Woods spoke of the daily struggle her husband endures.

“He can’t tell you what he just ate,” she said. “He can’t tell you where he goes, who he sees and I have to give him constant instruction to do his daily tasks. I tell him to get dressed, brush his teeth, wash his hands and make him bathe and shave.”

James Woods has six goats and a dog, which his family says are therapeutic for the former electrician.

“When he was in North Carolina we learned that it was a good thing to keep him active and engaged,” his daughter said.

Married for 47 years, Teresa Woods said her husband was a kind man who never met a stranger before the accident. His military service saw one of their children born in Germany and one in California.

“He was a very hard worker and a prankster and liked to pick on everybody,” his wife added. “He loved kids. When we shopped, I would park him in the hunting section and tell him not to move.”

James Woods was a deacon in his church before the accident, and while the family still lives a life of faith, his wife spoke candidly about how the accident affected her.

“I’m still bitter,” she said. “I feel like he (God) could have prevented it and this didn’t have to be forever. On their way to work that day, he and our son almost hit a horse in the road. I wish they had hit the horse because broken bones will heal, but his brain will never heal. This is forever. My husband is now a child that can never grow up.”

“He was at my house the other day and that trickster came out in him and he was tormenting my boys,” said Sherry Lilly, laughing.

“Manchin did a lot and he fought for James to be included and that meant the world to me,” she said emotionally. “I will never forget that.”

Terry Vermillion and James Woods exchanged firm handshakes that led to an emotional embrace as the plastic bag with the watch and spiral notepad found their way home.

“This is a good day,” Vermillion concluded. “It means a lot to me to meet this family.”