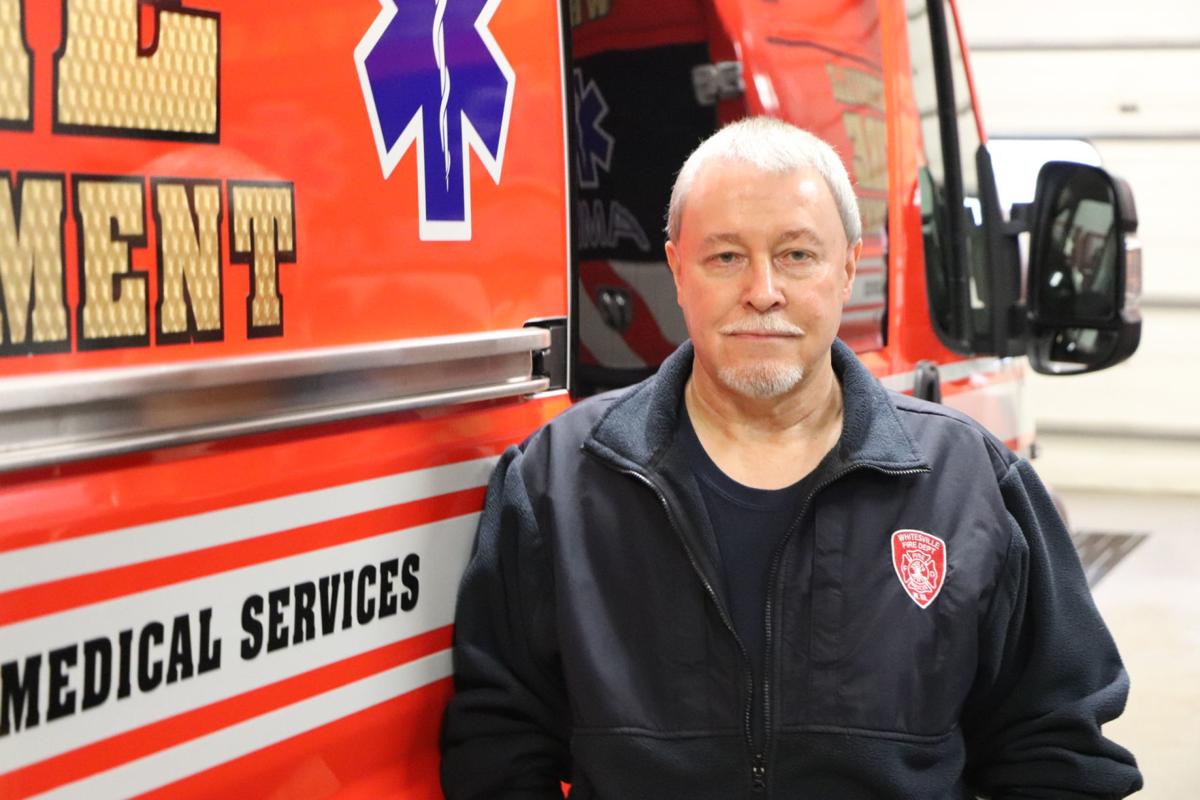 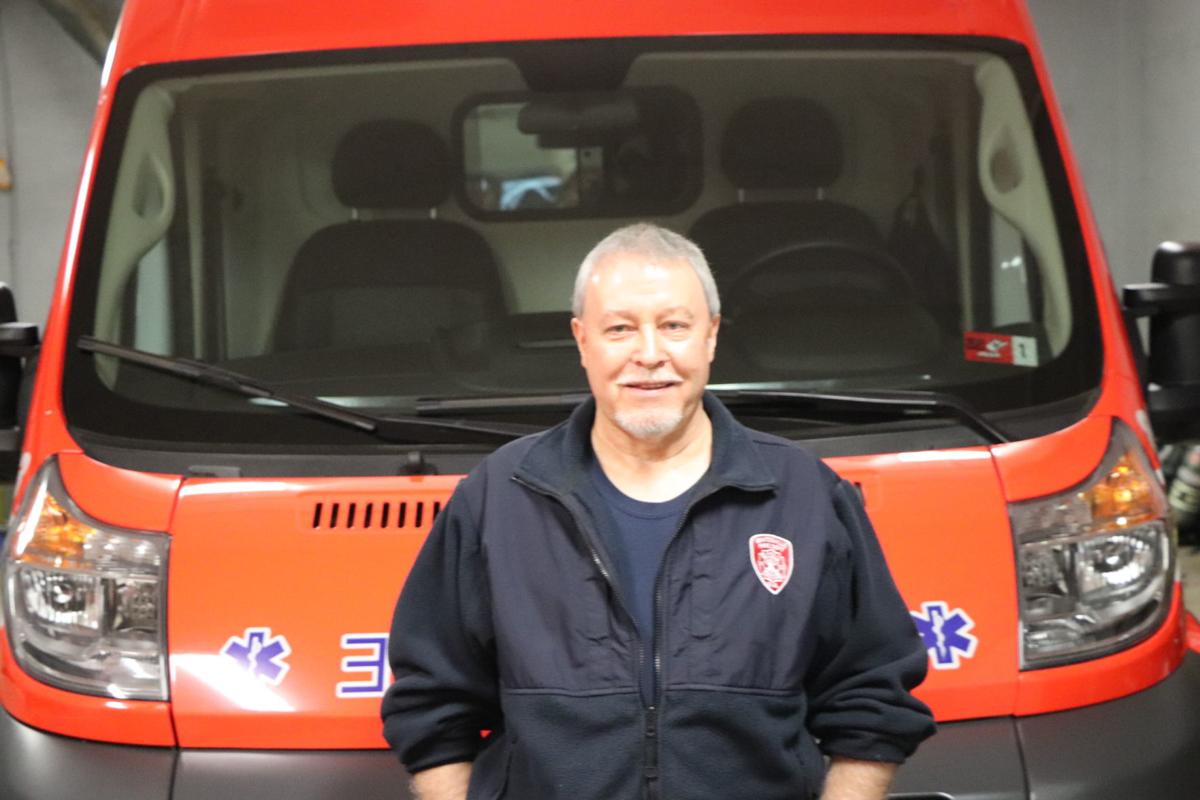 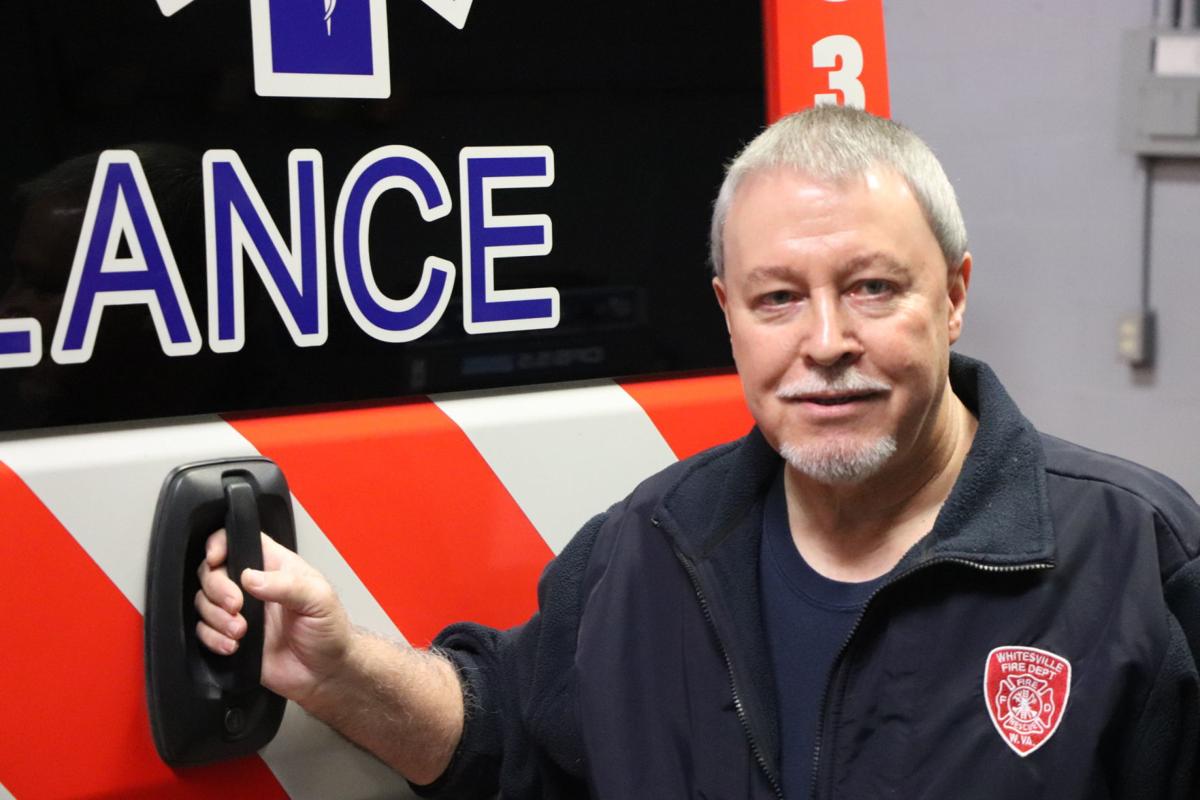 “You are reminded of how long you’ve worked at a career when someone reminds you of a call you were on 30 years ago,” he said, laughing. “It may take me a while to think about it, but I can usually remember at some point. There has just been so many calls, you know?”

Vermillion, 63, isn’t an imposing figure physically, but it is clear that he keeps himself in good shape as he knows the demands of the trade.

“I do my best to stay in shape and I’ve been real lucky with my health, knock on wood,” he said. “I feel good and I’ll work as long as I’m able, but I think I’ll know when I’m done — but that day isn’t here yet.”

Vermillion’s family moved from the Oak Hill area when he was in the second grade and he graduated from the since-consolidated Marsh Fork High School in 1975.

“We lived just across the Boone-Raleigh line and I could have went to Marsh Fork or Clear Fork,” he said.

The current Sylvester resident said he joined the Whitesville Fire Department in 1984.

“I had some friends here and they encouraged me to come down and talk to them and I did around Christmas in December (1983),” he said. “It was January of the next year that I joined the fire department and then after a few months they needed someone to drive the ambulances, so I started doing that and after that it led to me becoming an EMT and then a paramedic. It really wasn’t on my radar and I was driving a truck prior to this.”

The fishing enthusiast said he wasn’t looking for a career in the medical side of first responding, but it was a perfect fit for him.

“There was a time for about six years when I worked at St. Francis Hospital and here at the same time, but when my daughter was born in 1992, I remained here in Whitesville and stayed closer to home,” he said.

Looking back at his nearly four decades of service, Vermillion said advancements in technology have changed the industry.

“We used to have three leads that we looked at on a cardiac monitor and now we have 12 and even 15,” he said. “My favorite advancement is the intraosseous drill that we used to do by hand when we couldn’t get an IV. It was pretty primitive. The Lucas CPR devices are really good, as well.”

Intraosseous infusion is the process of injecting directly into the marrow of a bone. This provides a non-collapsible entry point into the venous system.

He and his wife Leaann have one daughter, Kaylynn, who graduated from Sherman High School and also briefly worked in the medical field.

“She and her mother are very close, but she is a daddy’s girl,” he said, laughing.

She started her career as a phlebotomy technician and then an EKG technician before entering a RN nursing program.

“She decided that she didn’t want to be in the medical field for the rest of her life and joined the Army and is in the 82nd Airborne,” he said.

Vermillion said he and Leaann see their daughter multiple times throughout the year. Later this year, depending on the status of the coronavirus pandemic, the trio plan to go on an African safari together where Kaylynn is currently stationed. Prior to that, she served a stint in South Korea.

“Once a year we take a trip and surf fish in North Carolina, and it just means the world to me to do that with her,” he said. “We’re very proud of her and we just want her to be happy in this world.”

“Terry is an exceptional employee,” he said. “Throughout his years of service, he has always went above and beyond to provide excellent patient care. He is a true role model and example to those around him. He naturally has a calming demeanor in the midst of any situation and has always been the go-to guy.”

He continued, “Patients commonly request him by name, which is a true example of the compassion and relationships he develops with his patients. I can confidently say when I see Terry arrive on scene of any emergency, those in need are in the very best hands.”

Vermillion said there was one call in his career that he could never forget and it involved his father back in 1997.

Vermillion said the professional in him allowed him to do his job.

“At the time, I just mentally blocked it out and I approached it like any other patient, but it was later that it really got to me,” he said. “I did turn it over to some other guys who responded and back then, you pretty much had to take them to the hospital to pronounce them dead. I’ve had to take care of other family members and good friends as well. That is how it is when you live and work in a close-knit community.”

The paramedic was with the first EMS unit at the scene of the Upper Big Branch Mine disaster.

A decade ago, an explosion triggered by a spark from a piece of mining equipment coupled with coal dust traveled through the mine in Montcoal, West Virginia, taking the lives of 29 miners and injuring two others. The accident was the worst in the United States since 1970, when 38 miners were killed at two Finley Coal Company owned mines in Hyden, Kentucky.

The recovery effort from multiple agencies from multiple counties and states endured for days after the tragedy at the Raleigh County site, owned by Massey Energy.

“I treated one man who was critically injured and was flown out,” he said. “The man lived and he is doing better today. I’d like to reach his family because I still have the watch and stuff we took off of him that day when we started IVs on him. I’d like to return them to him and his family. He lives in Beckley somewhere.”

The paramedic said he is reminded of that week when he drives past the Upper Big Branch Miners Memorial in Whitesville.

“The memorial is important to this community and I think that it is a constant reminder, but in a good or healing way,” he said. “I drive by it virtually every day, but I think about it once a day regardless. It just enters my mind. It was that impactful.”

Another time, about 15 years ago, Vermillion responded to the report of an accidental workplace arm amputation.

“We arrived thinking the absolute worst and it was snowing that day and we get to the guard shack and the guy is sitting in there with his left arm amputated from the elbow down and he’s sitting there smoking a cigarette just as calm as could be, and they had the bleeding stopped on the wound. We took him to Charleston because we couldn’t fly because of the weather and we finally talked him into pain medicine.”

Vermillion said they had to recover the arm to have a chance at reattaching it. He said after recovering the arm, they wrapped it in sterile dressing and plastic but needed something to transport it in with some ice packed around it. They needed something and they needed it in a hurry.

“One of our guys who lived across the street said he’d find something so we stopped long enough to grab it and it was his mom’s turkey roaster,” he said, laughing. “We filled it full of ice and put that arm in a turkey roaster. We got to Charleston General and the nurse asked if we wanted the turkey roaster back and we said we didn’t think that she would.”

Vermillion said the man chose not to go through with the reattachment and that the accident never slowed him down.

“I saw him afterward and he still fishes and lives his life,” he added. “I see him in Beckley occasionally.”

The motorcycle enthusiast also spends time cruising the West Virginia landscapes on his Harley-Davidson in his spare time. The family also finds time to spend with Zeus, their 150-pound bulldog.

Vermillion said the good of his work outweighs the bad, and he’d like to see more young people pursue the profession and volunteer as firefighters.

“That is the thing about it,” he said. “You have to go into it with the right frame of mind. More things turn out well than bad. When you see families reunited and children that have good outcomes, it just makes it all worth it. I’d definitely do it all again.”