Sign Up
Log In
Purchase a Subscription
You have permission to edit this article.
Edit
News & Features
Sports
Opinion
Obituaries
Photos
HD Media LLC
Share This
No Thanks
1 of 5 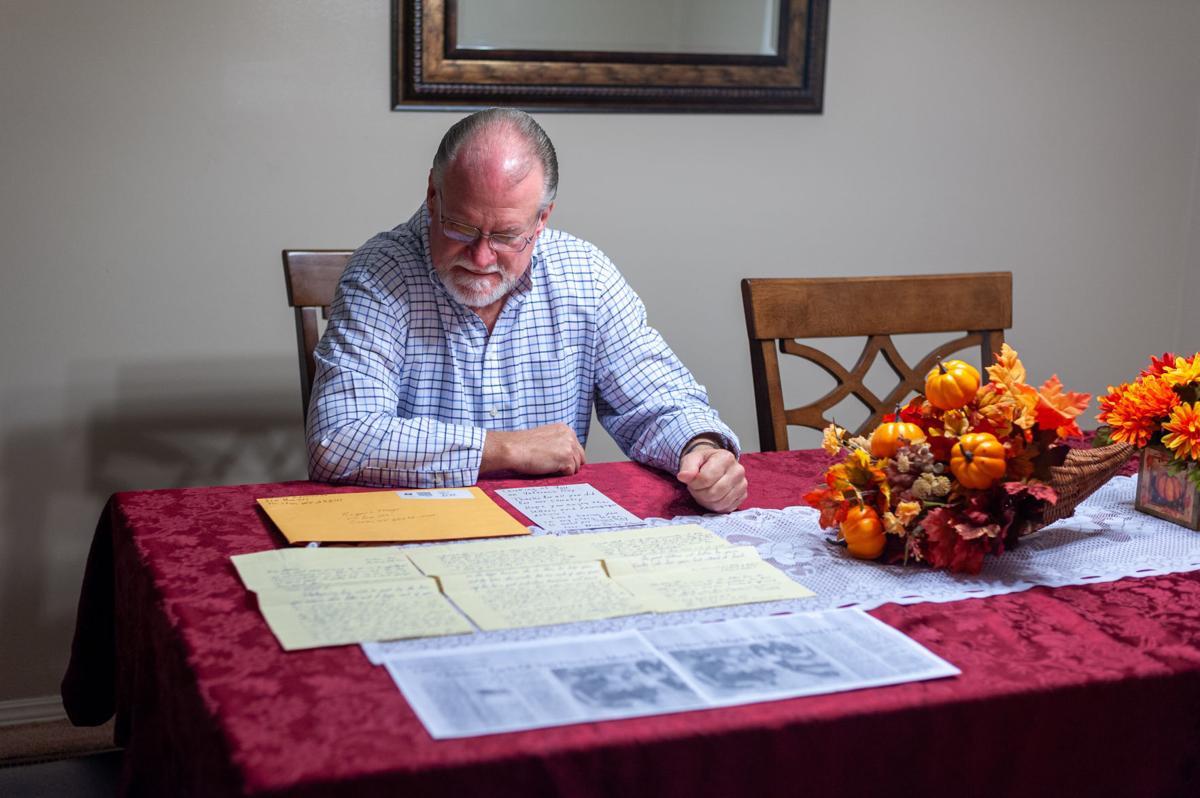 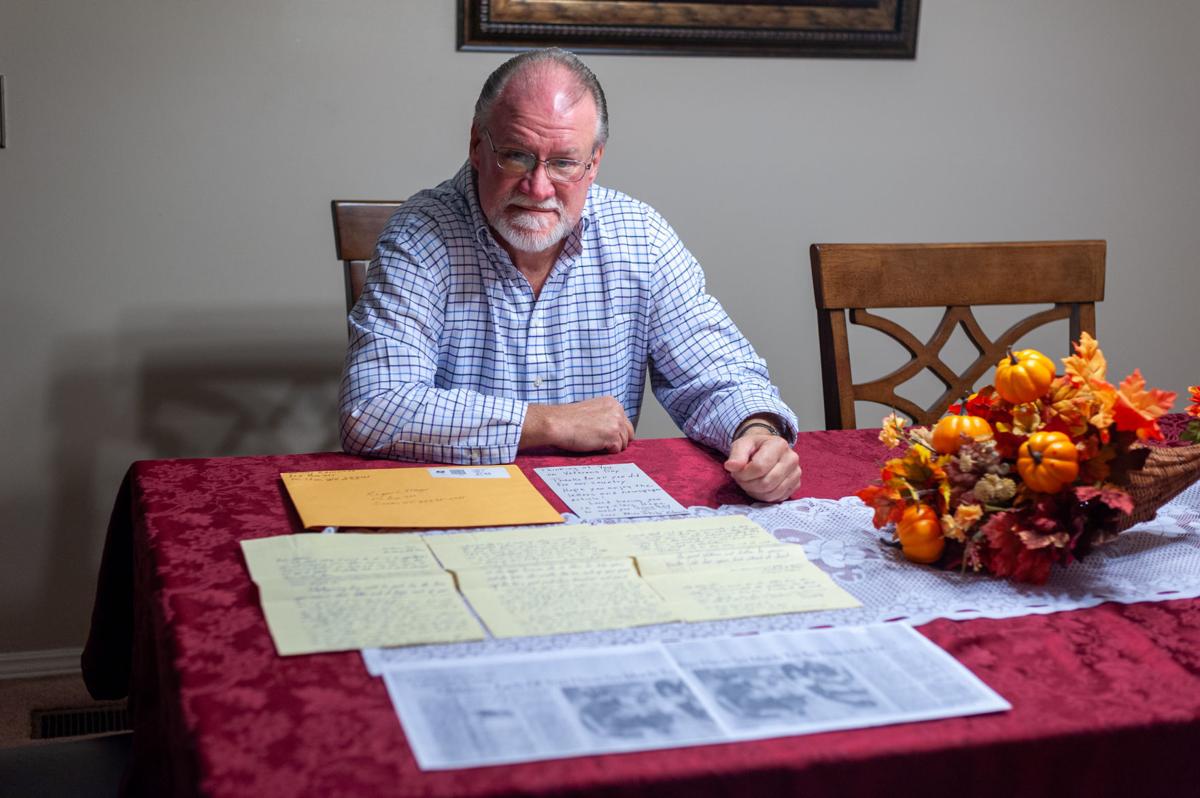 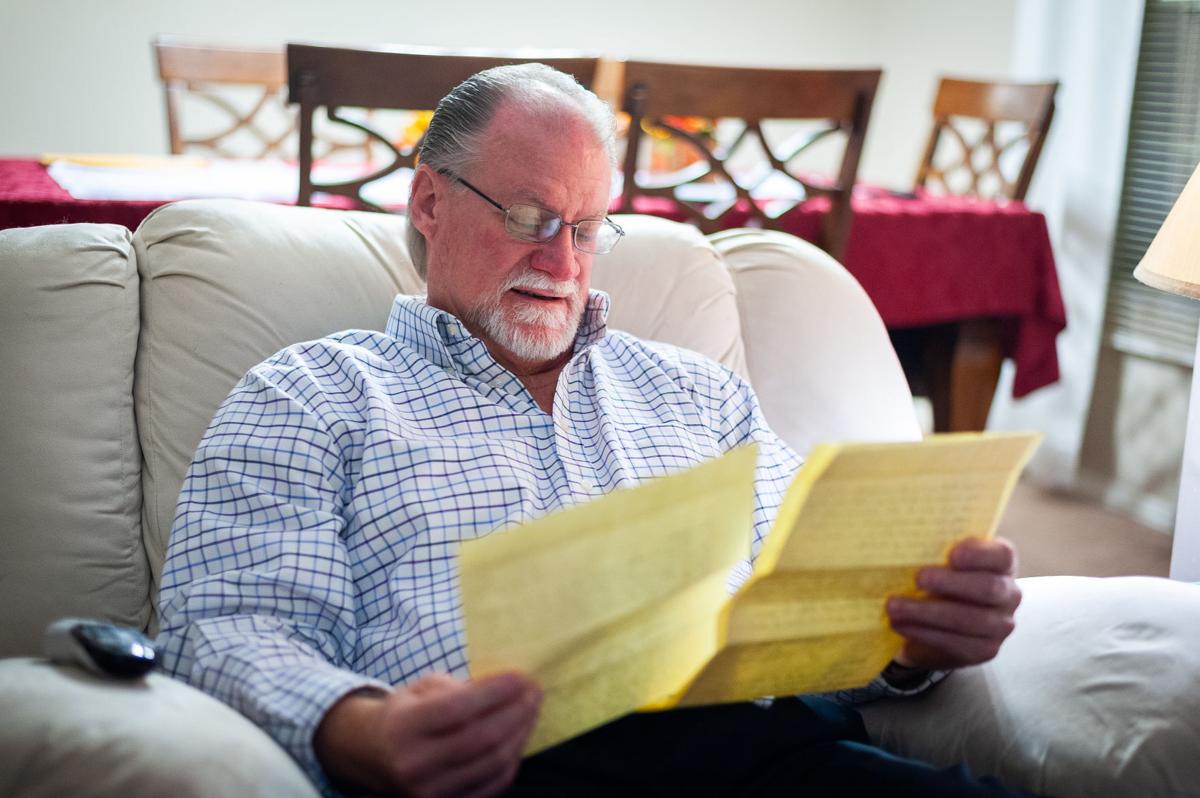 Sitting in his living room recliner, Chauncey resident Roger Mayo grows emotional as he reads a handwritten letter from his late father, Gunnery Sgt. Richard Mayo, that was mailed from Vietnam to his fourth-grade class at Altizer Elementary School in Huntington in 1969. 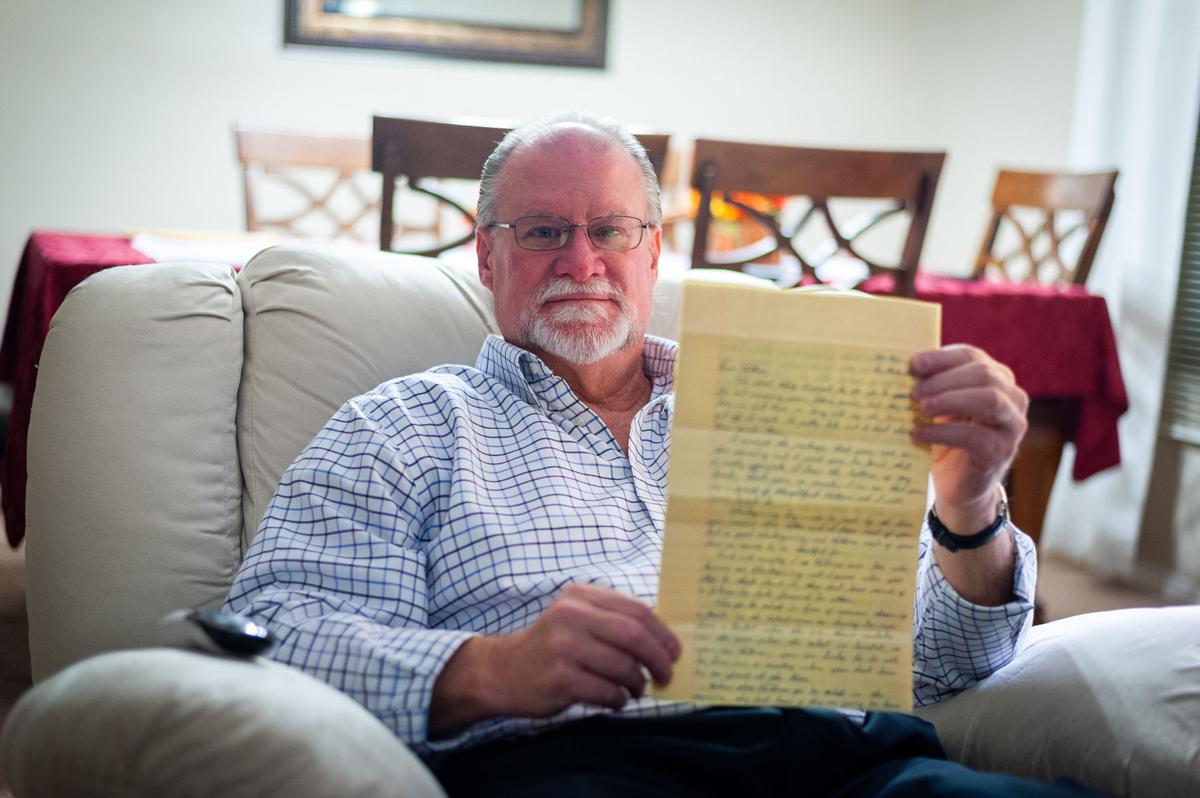 Sitting in his living room recliner, Chauncey, W.Va., resident Roger Mayo holds up a copy of a handwritten letter from his late father, Gunnery Sgt. Richard Mayo, that was mailed from Vietnam to his fourth-grade class at Altizer Elementary School in Huntington in 1969. 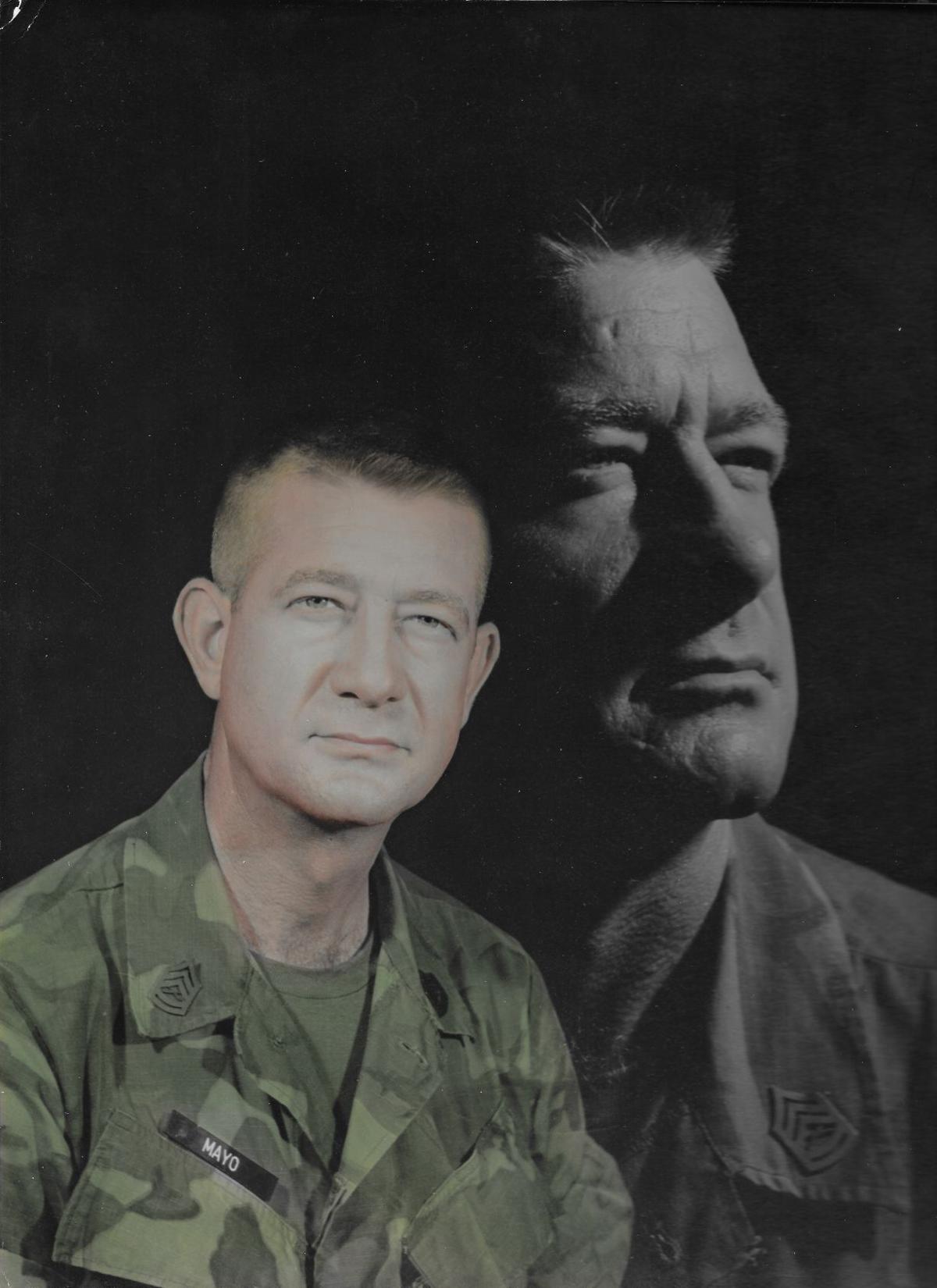 Sitting in his living room recliner, Chauncey resident Roger Mayo grows emotional as he reads a handwritten letter from his late father, Gunnery Sgt. Richard Mayo, that was mailed from Vietnam to his fourth-grade class at Altizer Elementary School in Huntington in 1969.

Sitting in his living room recliner, Chauncey, W.Va., resident Roger Mayo holds up a copy of a handwritten letter from his late father, Gunnery Sgt. Richard Mayo, that was mailed from Vietnam to his fourth-grade class at Altizer Elementary School in Huntington in 1969.

CHAUNCEY, W.Va. — Just before Thanksgiving Day in 1969, Gunnery Sgt. Richard Mayo, who was serving in the U.S. Marine Corps in Da Nang, Vietnam, penned a handwritten letter to his son’s fourth-grade class at Altizer Elementary in Huntington. Fifty years later, his son saw the letter again after his former teacher tracked him down and mailed it to him.

Roger Mayo was just 9 years old when his father wrote the letter.

“I was sitting in the recliner one evening, and the phone rang,” Mayo said. “Come to find out, it was a teacher of mine from the fourth grade, Mrs. Shirley Edmunds. ... So my teacher calls and she asks, ‘Is this Roger Mayo that went to Altizer?’ and I said, ‘Yeah.’”

Mayo said he received the call about a year ago after Edmunds found him on Facebook. He said he immediately knew which letter she was referring to, but had always thought his mother, Blanche, was in possession of it.

Richard Mayo, a gunnery sergeant for the U.S. Marine Corps for 20 years, wrote the letter to his son’s class from Da Nang, Vietnam, on Nov. 24, 1969, three days before Thanksgiving that year. The letter was in response to the class sending Mayo a care package that contained edible and practical items, as well as a series of letters Edmunds had each child in the class write to him.

The letter was later documented in a (Huntington) Herald-Dispatch story dated Dec. 16, 1969.

“The first thing I want to do is to apologize for not answering your letters sooner, but the day here in Vietnam is long and by the time I get off at night it’s pretty late and I don’t always have much time.

“I received the package that you sent me this morning and I want you to know that I really appreciate it from the bottom of my heart. Thank you so much; I can see that you are a group of thoughtful children and I will never forget it.

“Each and every day I see children over here who know no Thanksgiving and I guess when you stop to think about it, they don’t have much of a future to look forward to either.

“They go to school in fear of someone throwing a bomb in the schoolroom or having to run from a rocket when the V.C. throw rockets in the area where the school is located, so you see, children, you are lucky to be able to live in a country where you don’t have to be afraid all the time.

“When these children go to school in the morning, they don’t know if they are going to have school all day or if some of them will be in the hospital before noon. It’s an awful way to have to live and this is one of the reasons I feel so sorry for them; if only you could see and understand how they live in fright.”

“Everytime I see one about your age, I stop and think of how lucky you are to be there in West Virginia and not in Da Nang, Vietnam, and how glad I am to know that my family as well as yours is safe and does not have to be scared when they hear the big guns fire as they are this very minute.

“Be thankful for your teacher, children, and do as she says because she is there to help you, and I’m sure she wants to see each of you grow up to be good, productive Americans and proud to call America your home.

“I’d like to close this letter by saying I am proud to be here so you can be able to go to school and get a good education. Let’s all pitch in and help the Vietnamese people all we can, instead of waving signs and saying, ‘Get out of Vietnam.’ We have a big job left to do over here yet and we need the help of you there at home.

“I was especially proud of the people there in Charleston when I read in the newspaper that they had a march in support of the war and to know there are still some people back there who are still with us. I wish I could thank each of them personally; it took more courage to stand up for what they thought was right than to hide behind something they really know nothing about, and I hope God has a special place in His heart for the fine people of Charleston.

“Christmas will be here soon and it will be time to exchange gifts. I wish each and every one of you a very Merry Christmas and I wish I could be there to share it with you, and if I’m real lucky, I will be next year. I’m going to send a Vietnamese Christmas card to your room in a couple of weeks.

“Be good children and listen to your teacher; she has your best interests at heart.

“God bless each and every one of you.”

“Thanks so much for the letter from the children. Please overlook the mistakes; I’m tired and it’s been a long day. I really do appreciate your efforts. My thoughts are with you and the staff of the school at Christmas time.

“P.S. Bust Roger good if he needs it, and I am sure he does often enough. ‘With my blessings’ Ha.”

Richard Mayo died in 2005. Roger still becomes emotional when he reads those words in his late father’s handwriting. The original Herald-Dispatch article features of photo of him, his classmates and Edmunds looking at Vietnam on a globe in his classroom.

“It got to me reading it,” Mayo said. “You know, it brought back a lot of memories that you suppress, and I mean, I can actually look at those pictures and I was 9 years old there and I can still smell the classroom and everything and it’s amazing what you forget, but yet, you don’t forget. Needless to say, when I read the letter, I had remembered, for the most part, what was in the letter.

“I was tore up,” Mayo added, describing what he felt the first time he opened the letter. “It still gets me, you know, a 60-year-old man … tough … it’s tougher than I thought it would be.”

Mayo became particularly choked up where his father says he will not be home for Christmas. The memory is just one of many painful ones he can recall growing up as the child of an active service member.

Born in the Logan County community of Holden, Mayo moved to California with his family when he was just 3 months old. Most of his other family moved out of Logan County after the area’s catastrophic 1963 flood. Growing up, Mayo says he moved about 44 times — attending 13 schools in 12 years, including three different schools in two different states when he was in the seventh grade.

During that time, he lived in multiple states including California, North Carolina, Georgia and Virginia. He called Huntington home five times, noting that his family would move there every time his father went overseas. Mayo has called Logan County home for the past 40 years, and he currently lives at Chauncey — a community near Omar along W.Va. 44 — with his wife, Debbie Alderman Mayo.

They have two grown children, and have always lived in the same general area along W.Va. 44, which Mayo said was intentional to give his children a different upbringing than the turbulent one he had.

Mayo graduated from Barboursville High School in 1978, but his class ring is from Clover Hill, Virginia, which is where he thought he’d be graduating from.

“I’ve actually lost count — I’ve moved 43 or 44 times — and I swore that I would never put my children through that, and I haven’t,” Mayo said. “I told Deb that, I said I’ll never do that, because I wouldn’t want any child going through what I went through. We wouldn’t live anywhere long enough, sometimes, to even get everything completely unpacked, and we’d move again. I’ve been here, it’ll be 40 years in December, and I guess I’ll be here until the good Lord calls us home.”

Richard Mayo was an Omar native himself before joining the USMC during the Korean Conflict. After retiring from the USMC, he moved back to Logan County for a time, where he was known for being active in community improvement efforts. He moved back to Barboursville for good in 1986, but continued to commute each day to Chapmanville for work.