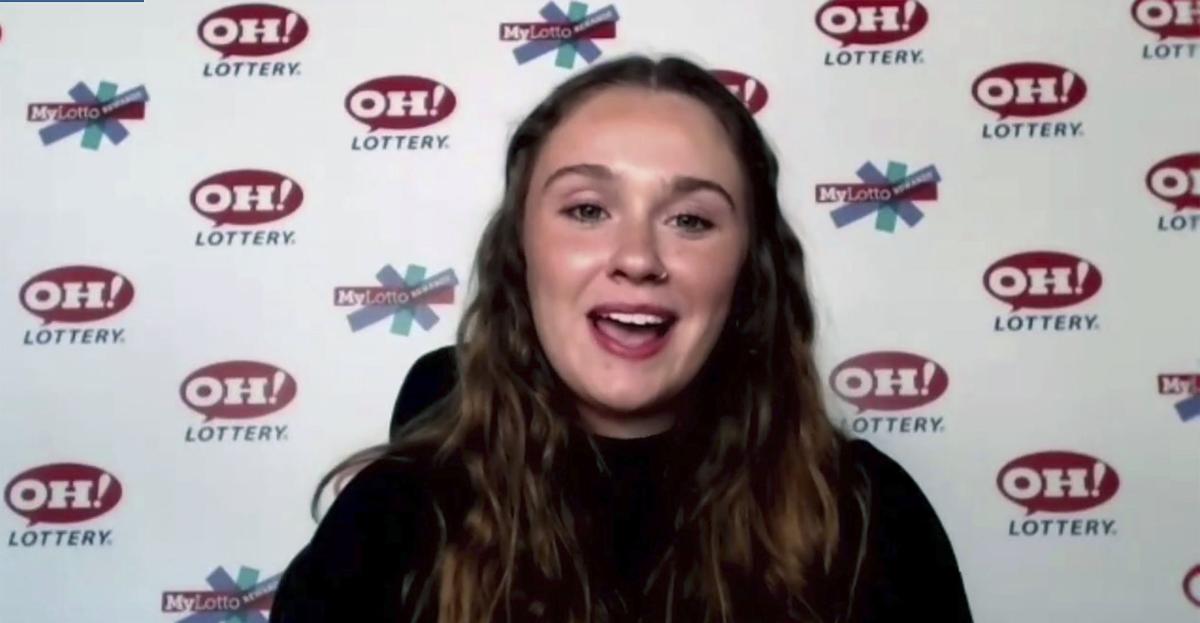 In this still image taken from video by the Office of the Ohio Governor, Abbigail Bugenske, 22, from Cincinnati, the first winner of Ohio’s first $1 million Vax-a-Million vaccination incentive prize, is interviewed during a news conference May 27, 2021. 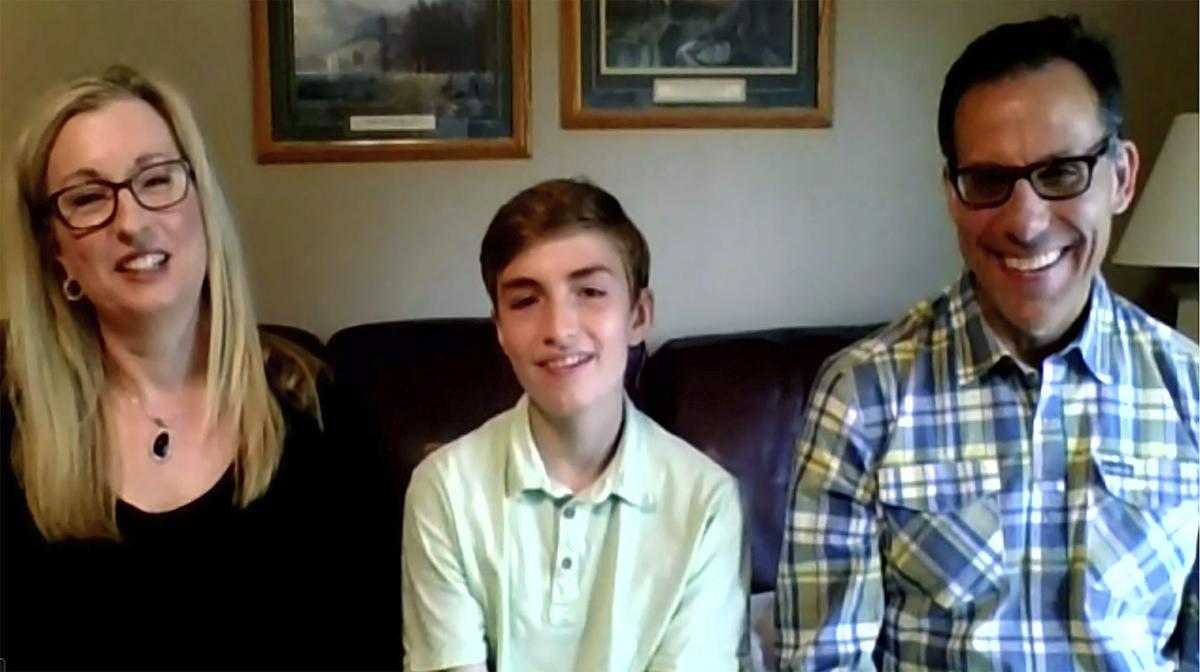 In this still image taken from video by the Office of the Ohio Governor, eighth-grader Joseph Costello, center, of Englewood, Ohio, the winner of the Ohio Vax-a-Million full college scholarship vaccination incentive prize, is interviewed during a news conference Thursday, May 27, 2021. He is joined by his parents, Colleen and Rich Costello.

In this still image taken from video by the Office of the Ohio Governor, Abbigail Bugenske, 22, from Cincinnati, the first winner of Ohio’s first $1 million Vax-a-Million vaccination incentive prize, is interviewed during a news conference May 27, 2021.

In this still image taken from video by the Office of the Ohio Governor, eighth-grader Joseph Costello, center, of Englewood, Ohio, the winner of the Ohio Vax-a-Million full college scholarship vaccination incentive prize, is interviewed during a news conference Thursday, May 27, 2021. He is joined by his parents, Colleen and Rich Costello.

CHARLESTON — West Virginia will step up its prizes for vaccines, enrolling all residents who have received a coronavirus shot into a lottery for the chance to win a college scholarship, an F-150 pickup truck or cash rewards.

Republican Gov. Jim Justice announced the plan for the new incentives Thursday, but more details are expected to be finalized next week. The governor has aimed to turn around a vaccination drive that drastically slowed down after a strong early start.

“We’re going to make a few West Virginians millionaires before this is over,” Justice said.

The program is expected to be paid through federal pandemic relief funds.

Vaccinated residents aged 16 to 35 are already set to receive a $100 savings bond or gift card.

Half of the state’s residents have received at least one vaccine dose, while 40.6% are fully inoculated, according to state data. Justice projects that more than two-thirds of eligible residents, those ages 12 and over, will be vaccinated by the time the state removes its mask mandate June 20.

He said he wanted to beat Ohio’s incentive program, which awarded its first of five $1 million prizes to a vaccinated woman Wednesday.

“We’ll blow Ohio out of the water,” Justice said.

Giveaways will include 10 Rocky Ridge version Ford F-150 trucks, which can cost around $80,000. The state will also follow Ohio’s prizes, which include full-ride college scholarships and $1 million rewards.

Justice said the drawings will start June 20. He urges residents to get vaccinated before then in order to qualify.

The deaths included an 84-year-old man from Wayne County, the 42nd virus-related death in that county.

In Ohio, the first winner of the state’s first $1 million Vax-a-Million vaccination incentive prize was driving to her family’s home in suburban Cleveland when she received a call about the good news — from Gov. Mike DeWine.

A few minutes later Abbigail Bugenske was in her parents’ house screaming so loudly they thought she was crying.

“A whirlwind,” Bugenske, 22, said Thursday morning during a news conference. “It absolutely has not processed yet. I am still digesting it — and I like to say that it feels like this is happening to a different person. I cannot believe it.”

Bugenske is a mechanical engineer working for GE Aviation in suburban Cincinnati, and has no plans to quit her job. She grew up in Shaker Heights near Cleveland and is a 2020 graduate of Michigan State University. She said she plans to donate to charities but then invest most of it.

She was on her way to Cleveland to look at used cars when she got the word, she said, and added: “I think buying a used car is still in my future.”

The winner of a full college scholarship was eighth-grader Joseph Costello, of Englewood near Dayton.

“Very excited,” Costello said as he sat between his parents, Colleen and Rich, during the virtual news conference. Although it’s a long way off, Joseph said he’s thought about Ohio State or Miami of Ohio for college.

Colleen Costello said she got the call from the governor as she left work Wednesday. At first she thought it was a recording, then realized it was DeWine himself.

“I was really thankful at that moment that there was a bench nearby, because I needed to sit down,” she said.

DeWine visited with the Costello family in person along with his wife, Fran DeWine, on Wednesday, after the announcement. He said he didn’t know the names of the winners until shortly before he made the calls.

Bugenske said she received the Moderna vaccine as soon as she was eligible, long before the lottery was announced. The Costellos said they were already vaccinated and had planned to have their children vaccinated by the end of the month, but the lottery announcement inspired them to move those appointments up.

During a scheduled visit to Cleveland on Thursday, President Joe Biden said, “Ohio has a new millionaire! I tell you what, who wouldathunk it, a million bucks for getting a vaccine? But it’s working.”

DeWine, a Republican, announced the program May 12 to boost lagging vaccination rates.

The Ohio Lottery conducted the first drawing Monday afternoon at its draw studio in Cleveland using a random number generator to pick the winners ahead of time, and then confirmed the eligibility of the ultimate winner.

Participants must register to enter by phone or via the Vax-a-Million website. Teens can register themselves, but parents or legal guardians must verify their eligibility. The names of entrants who don’t win will be carried over week to week. The deadline for new registrations is just before midnight Sunday.

“I know that some may say, ‘DeWine, you’re crazy! This million-dollar drawing idea of yours is a waste of money,’” the governor said when he announced the incentive. But with the vaccine now readily available, the real waste “is a life lost to COVID-19,” the governor said.

The concept seemed to work, at least initially. The number of people in Ohio age 16 and older who received their initial COVID-19 vaccine jumped 33% in the week after the state announced its million-dollar incentive lottery, according to an Associated Press analysis.

But the same review also found that vaccination rates are still well below figures from earlier in April and March.

More than 5.2 million people in Ohio had at least started the vaccination process as of Monday, or about 45% of the state. About 4.6 million people are done getting vaccinated, or 39% of the state. Nationally, more than 165 million Americans have started the vaccination process, or about nearly 50% of the population. More than 131 million are fully vaccinated, or nearly 40%.

Vax-a-Million is open to permanent Ohio residents who have received either the one-dose Johnson & Johnson vaccine or their first part of the two-dose Pfizer or Moderna vaccination.

The governor said this week that the virus’s incidence rates were much higher among younger Kentuckians, and that it was “directly associated with whether you’re vaccinated.”

While more than 80% of people ages 65 and older in Kentucky have been vaccinated, inoculation rates have lagged among younger Kentuckians.

More than 2 million Kentucky residents have received at least their first shot of COVID-19 vaccine.

Kentucky counties with the highest vaccination rates are Woodford, Franklin, Fayette, Scott and Boone, according to state statistics. Counties with the lowest rates are Christian, Spencer, Ballard, McCreary and Lewis.

The statewide rate of positive cases was 2.51%, the governor said.

Kentucky’s virus-related deaths since the pandemic began reached at least 6,748. Two of the deaths announced Thursday were discovered from the state’s audit of deaths from prior months.