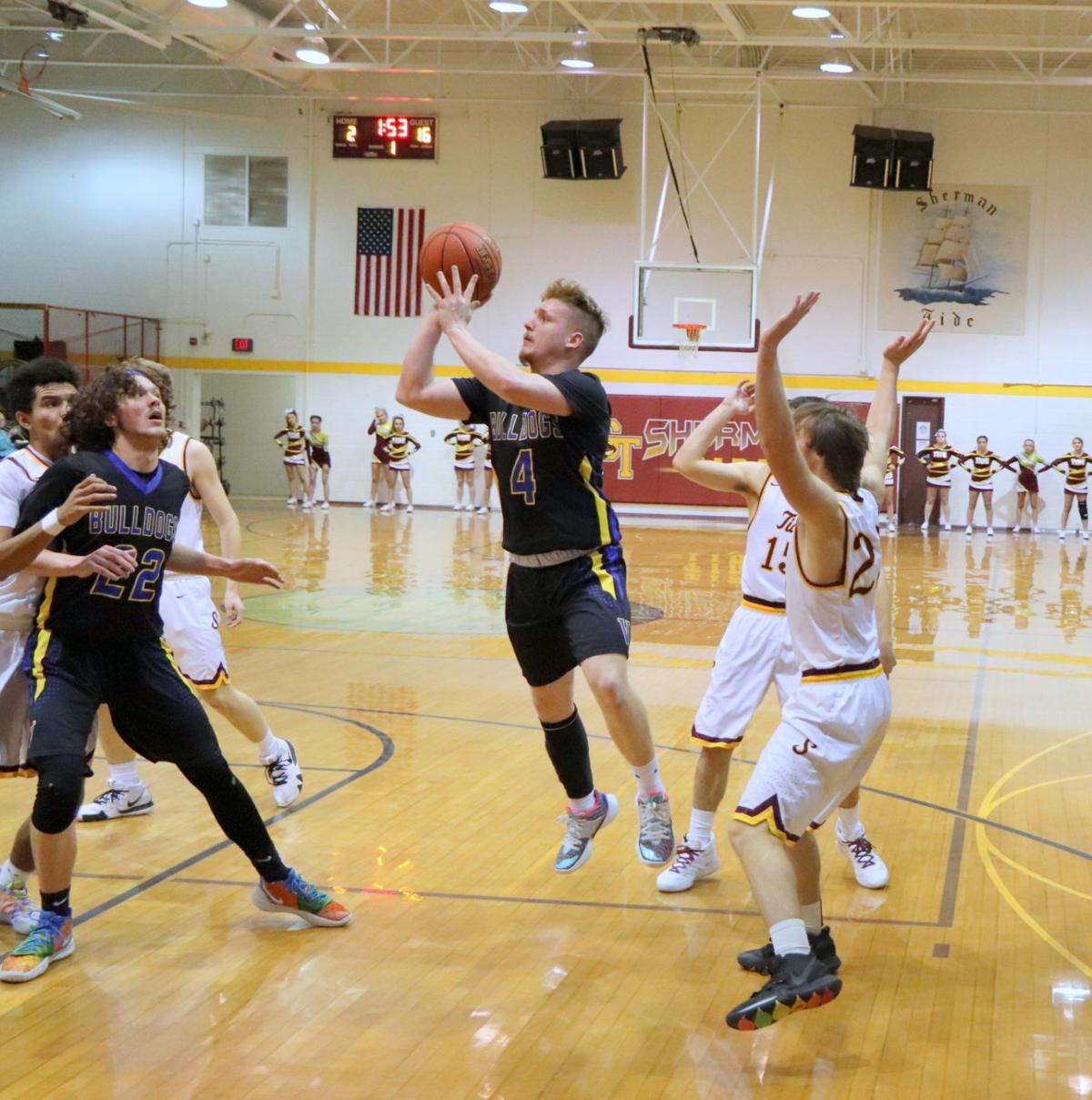 Van High’s Austin Javins (left) provides a pathway for teammate David Stewart as he scores two of his 32 points in Van’s 67-49 win over cross-county rival Sherman on Jan. 21. 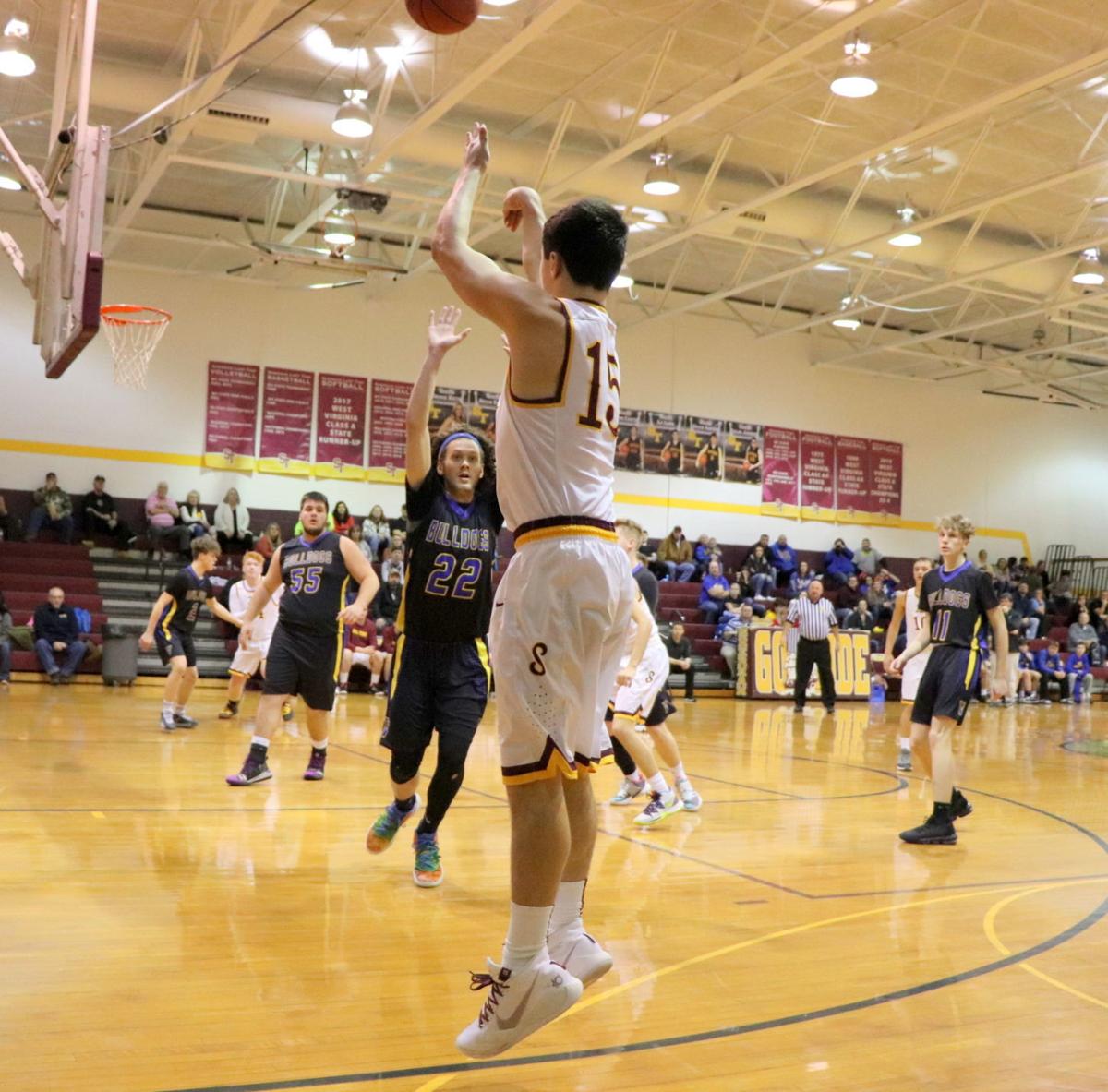 Sherman’s RJ Cline fires up a 3-point shot versus Van in a cross-county rivalry game that Van won on Jan. 21.

Van High’s Austin Javins (left) provides a pathway for teammate David Stewart as he scores two of his 32 points in Van’s 67-49 win over cross-county rival Sherman on Jan. 21.

Sherman’s RJ Cline fires up a 3-point shot versus Van in a cross-county rivalry game that Van won on Jan. 21.

SETH — Senior guard David Stewart put on a show in the form of a 32-point effort and Van used an early advantage to beat Sherman at Seth, 67-49 on Jan. 21.

Stewart served as a catalyst for the Bulldogs on this night as Van jumped out to an early 16-2 advantage in the first quarter as they took advantage of Sherman gaffes and turned them into quick transition buckets.

Stewart and fellow guard Jacob Jarrell tickled the twine early, netting a pair of 3-point bombs each to push the Bulldogs forward.

Stewart showed why he is one of the best athletes in the county on this night in creating his own shot off the dribble, driving hard to the bucket and displaying range on the perimeter. He joined Sherman’s Chris Abbott, Scott’s Jon Jon Hamilton and Jagger Bell in registering 30-point games this season, all CVN All-County boys basketball selections a year ago.

The Tide student section was a presence, even hoisting the trophy from the “Showdown for the Shovel” rivalry football game, which Sherman has owned for three years.

It did not deter the Bulldogs from their task at hand.

Van (2-7) used a hybrid box-and-one at times while defending Sherman’s leading scorer Chris Abbott, who still managed to lift the Tide in the second frame when he buried a pair of treys from the wing, forcing Van defenders to the perimeter.

Van Coach David Gogas said his squad played well defensively and were opportunistic in their scoring.

“He’s a good player (Abbott) and we knew we had to guard him somehow because he can shoot you out of a game real quick,” said Gogas. “I have a lot of respect for him and he’s a great kid.”

Gogas said he wants to see more consistency out of the Bulldogs’ offensive sets moving forward.

“If we could ever run our offense for a second we could do some good things, but we can’t hold onto the ball and we’ve got to address that and get better at protecting ourselves on the offensive end. We took some bad shots tonight and we’re lucky that some of them dropped. We’re just happy to get the win tonight.”

In what was a tremendous surge for the Tide, Sherman got within four points before intermission but settled for a 29-22 deficit going to the locker room.

Alex Kirk and Logan Green were catalysts for the maroon and gold during their rise in the quarter.

The second half was all Bulldogs as they opened the third frame with a 16-6 run that dampened a fourth-quarter surge by Sherman. Van cruised to a 67-49 win in the cross-county clash of Class A schools.

Sherman coach Aaron Pauley said he was disappointed in his team’s inconsistent play.

“We were outplayed and outcoached,” he said. “We are still inconsistent in games and in practice and some of it is definitely my fault. When we decide to play and practice every day like we are capable of, then we will be a tough out for anyone. We have that dangerous word that I always talk about with our team — potential.”

Sherman played at Independence on Jan. 27 and Van hosted a first-round game in the WVHIT tournament on Jan 24.