You are the owner of this article.
Edit Article Add New Article
You have permission to edit this article.
Edit
Welcome, Guest
CVN
News & Features
Sports
Opinion
Obituaries
Classifieds
Legals
e-Edition
Share This
1 of 3 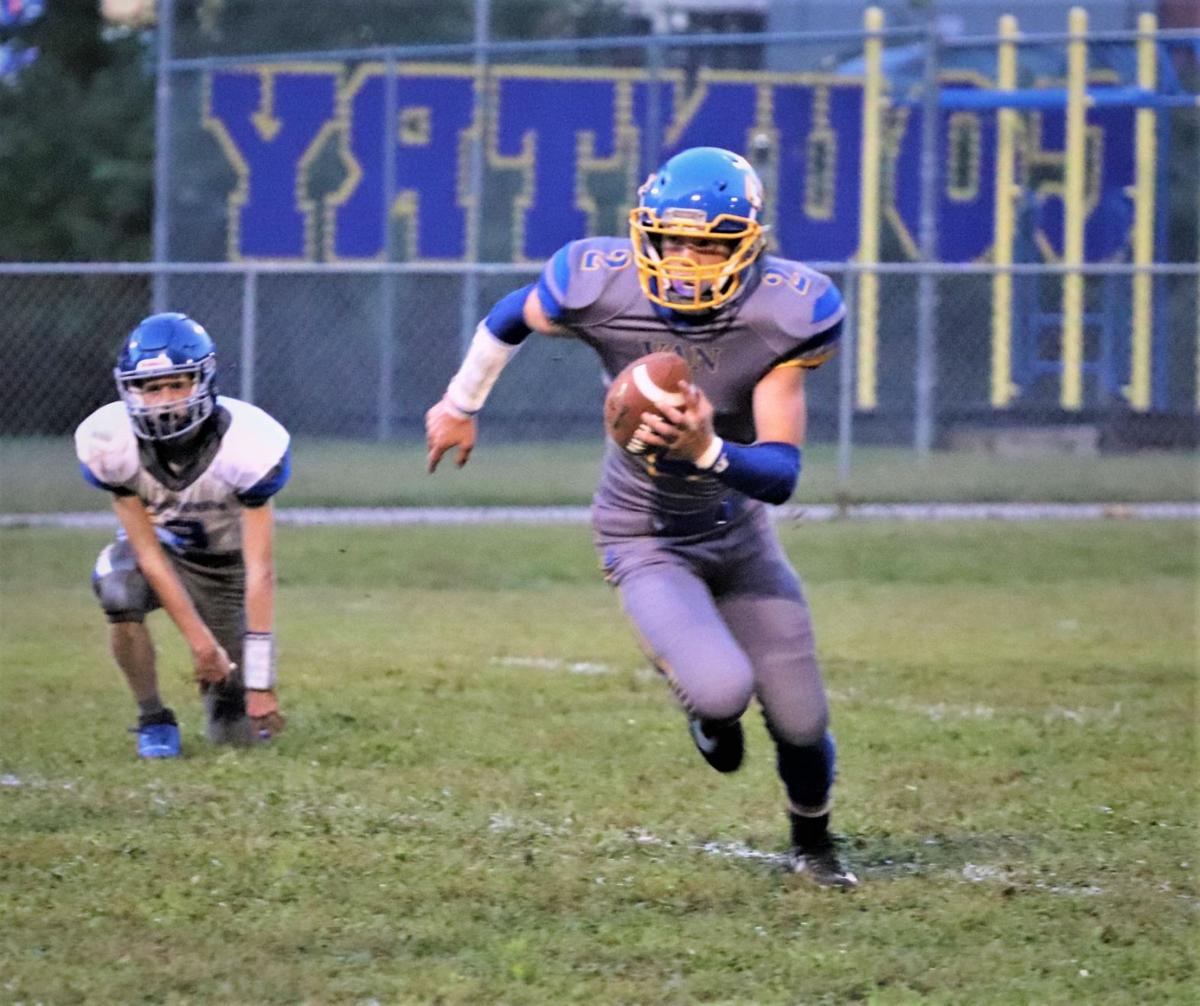 Van quarterback Kalen Booth picks up yards in the Bulldogs’ 51-15 win over Montcalm on Oct. 2. 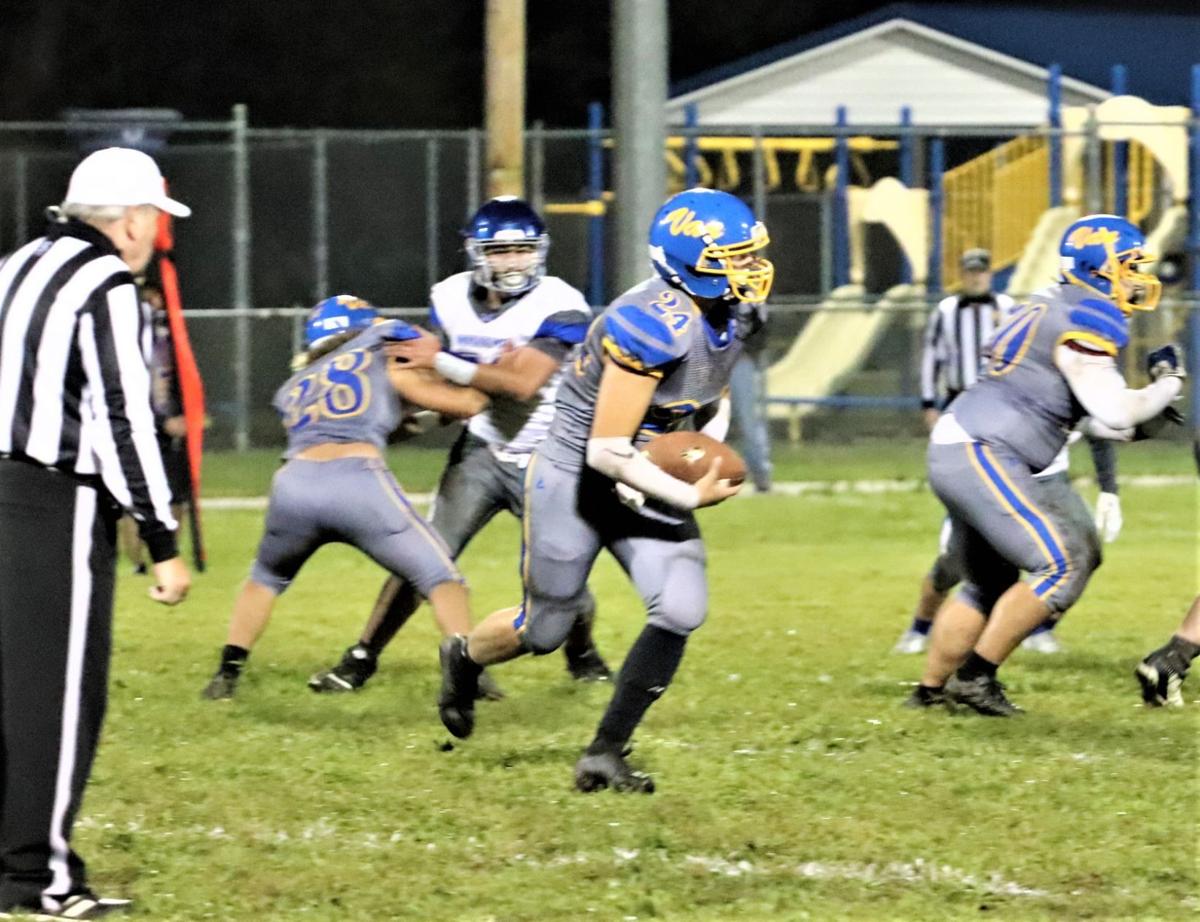 Van running back Byron Stewart looks for running room in the Bulldogs’ 51-15 win over Montcalm on Oct. 2. 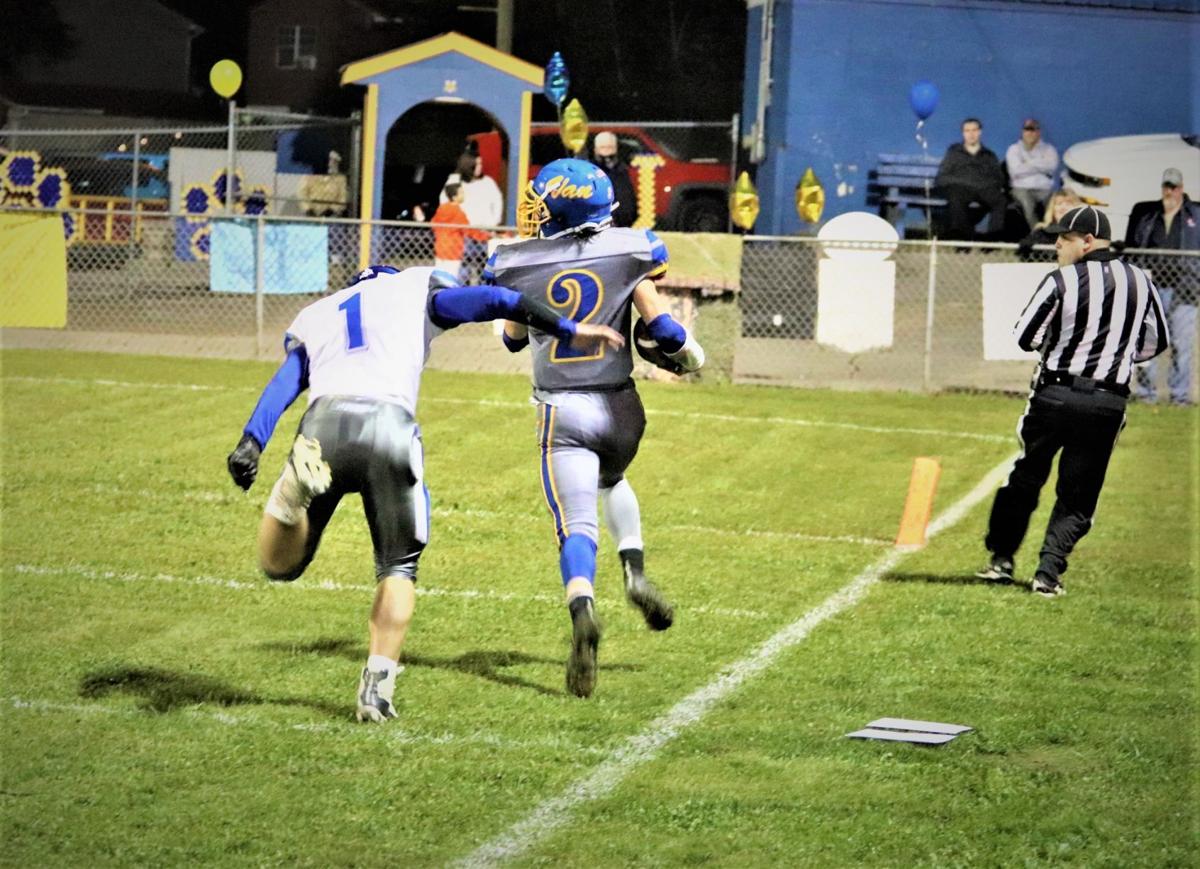 Van quarterback Kalen Booth picks up yards in the Bulldogs’ 51-15 win over Montcalm on Oct. 2.

Van running back Byron Stewart looks for running room in the Bulldogs’ 51-15 win over Montcalm on Oct. 2.

VAN — Van High School’s football team rushed for 447 yards and in the process notched a 51-15 home win over Montcalm at Herschel Jarrell Field on Oct. 3.

“I was really pleased with how we played up front (offensive line) and how our backs squared up and ran hard,” said Head Coach Mark Agosti. “We’ve had to fill the hole left at middle linebacker by committee. Overall, our defense took some steps forward last night.”

The hole that Agosti referred to was left by leading returning tackler Slade Adams, who has missed a pair of games with a fractured arm. Adams’ release date is unclear, but the Bulldogs are anxious for their defensive leader to be back on the field.

“The kids have done a great job doing what we need to do with him out,” Agosti added.

Van (2-1) got on the scoreboard early with barely three minutes off the game clock when sophomore running back Shaun Booth broke free from a pile and scampered 29 yards for a Bulldog score before Jesse Blankenship added the extra point and Van led 7-0.

Van sophomore Nick Chambers picked off an Ethan Nichols pass to set up a short Van drive that was capped off with another Shaun Booth score from eight yards out. The Bulldogs had the extra point attempt blocked and led 13-0 with 5:54 left in the opening quarter.

Montcalm (0-4) turned the ball over on downs near midfield and Van took advantage of the field position. On the first play from scrimmage, Brady Green reeled of a dazzling 55-yard run through the heart of the Generals’ defense, but it was called back on an illegal motion penalty with 3:33 to go in the frame. On the very next play, Byron Stewart took the ball from quarterback Kalen Booth and darted to the weak side and dashed down the sideline untouched for a score, and Van led 19-0 at the end of the opening quarter.

On Montcalm’s next series, Van forced a fourth down when the Bulldogs took running back Kevin Robertson down for a 12-yard loss to their own 37-yard line.

After a Generals punt, Van hit pay dirt again when Shaun Booth scampered 68 yards, shedding tackles along the way to the end zone. Van faked the extra point when Byron Stewart found Shaun Booth on a hitch pass and Van hit the conversion play to put them up 27-0 with 6:24 to go in the opening half.

Wide receiver Devin Green took the handoff on the Generals’ next series and took the ball 45 yards to put his team in the red zone. Montcalm set up for a fourth and goal play, just seconds later after Van’s defense bent, but did not break.

Chambers, a sophomore, picked off a Montcalm pass to the end zone on an athletic play at the 1-yard line for his second of the game, but as Van coaches thought it was forward progress that took him into the end zone, officials awarded the Generals a safety on the pick.

“That was Nick’s first start and he did a great job for us,” added Agosti. “He tackled well and played with confidence.”

Montcalm took the ball on a short field after the safety and Nichols connected with Robertson for a touchdown, making the score 27-9 after a successful kick as the opening half wound down.

After a Van turnover, Montcalm took another shot at the end zone through the air and Green was there to pick off the pass.

Green then extended that effort by catching a 37-yard toss from Kalen Booth and scooted down the sidelines in an attempt to score again before the half, but the score stood going into the locker rooms.

Montcalm looked to establish an early drive in the second half, but Shawn Booth was there to pick off a pass and put Van back into the driver’s seat and bring their offense back onto the field.

Brady Green reeled off a tough, hard run through Montcalm’s defense for a score and Kalen Booth converted the two-point conversion with a roll out and run to the strong side, making the score 35-9 with 8:28 to go in third.

Van then took complete control with a turnover of the Montcalm offense and Green once again made his presence know from the backfield as he ran 32 yards for a score, breaking three tackles along the way as he pulled away from the defensive backfield of the Generals. Van led 41-9 after Green added two points with a conversion run.

Nichols caught a pass for a score for Montcalm after a 41-yard drive after the snap was initially mishandled by the Generals’ backfield. The score stood at 43-15.

Van added a 17-yard run for a score from Green and a successful kick from Blankenship to bring the final score to 51-15.

“We tackled much better tonight and our guys on defense are playing downhill more,” Coach Agosti said after the game. “On offense we picked up blocks well and our backs hit the holes and our quarterback played a smart game for us. I’m pleased with the effort of our kids tonight.”

Individual statistics were not available before CVN print deadline.