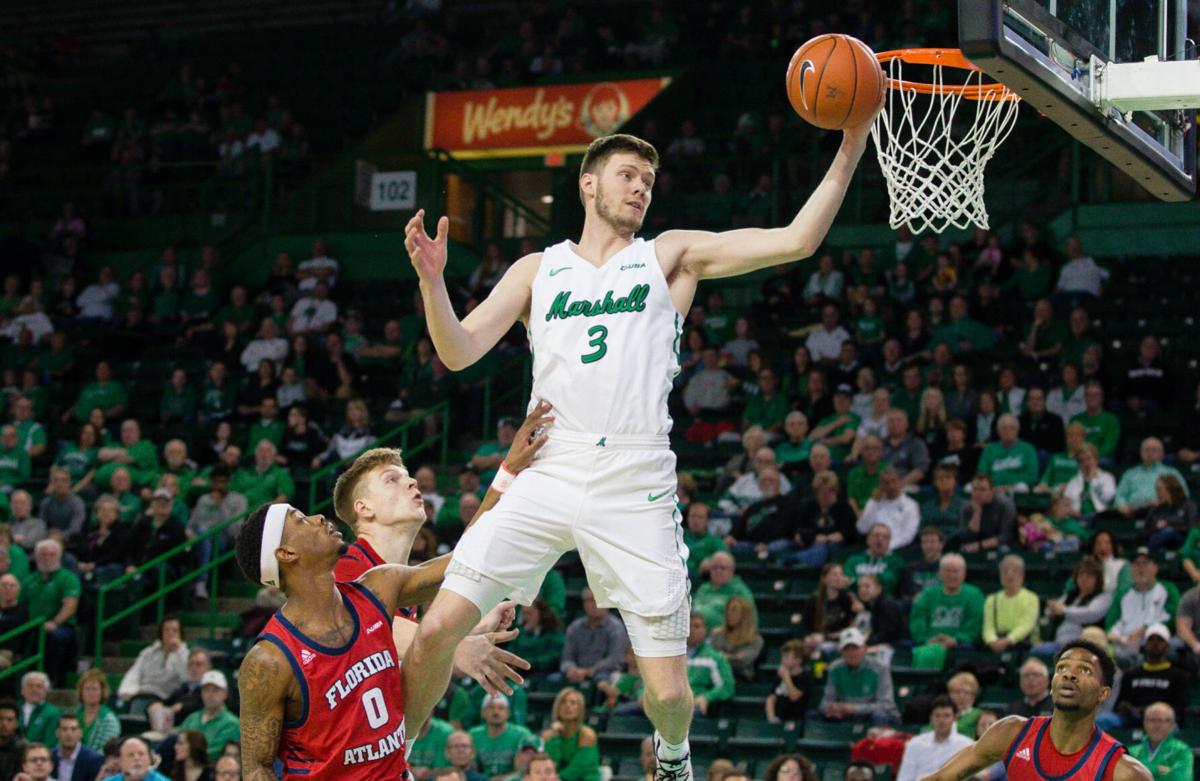 Marshall’s Jannson Williams (3) grabs a rebound as the Herd takes on Florida Atlantic during an NCAA men’s basketball game on March 6 at the Cam Henderson Center in Huntington, W.Va. 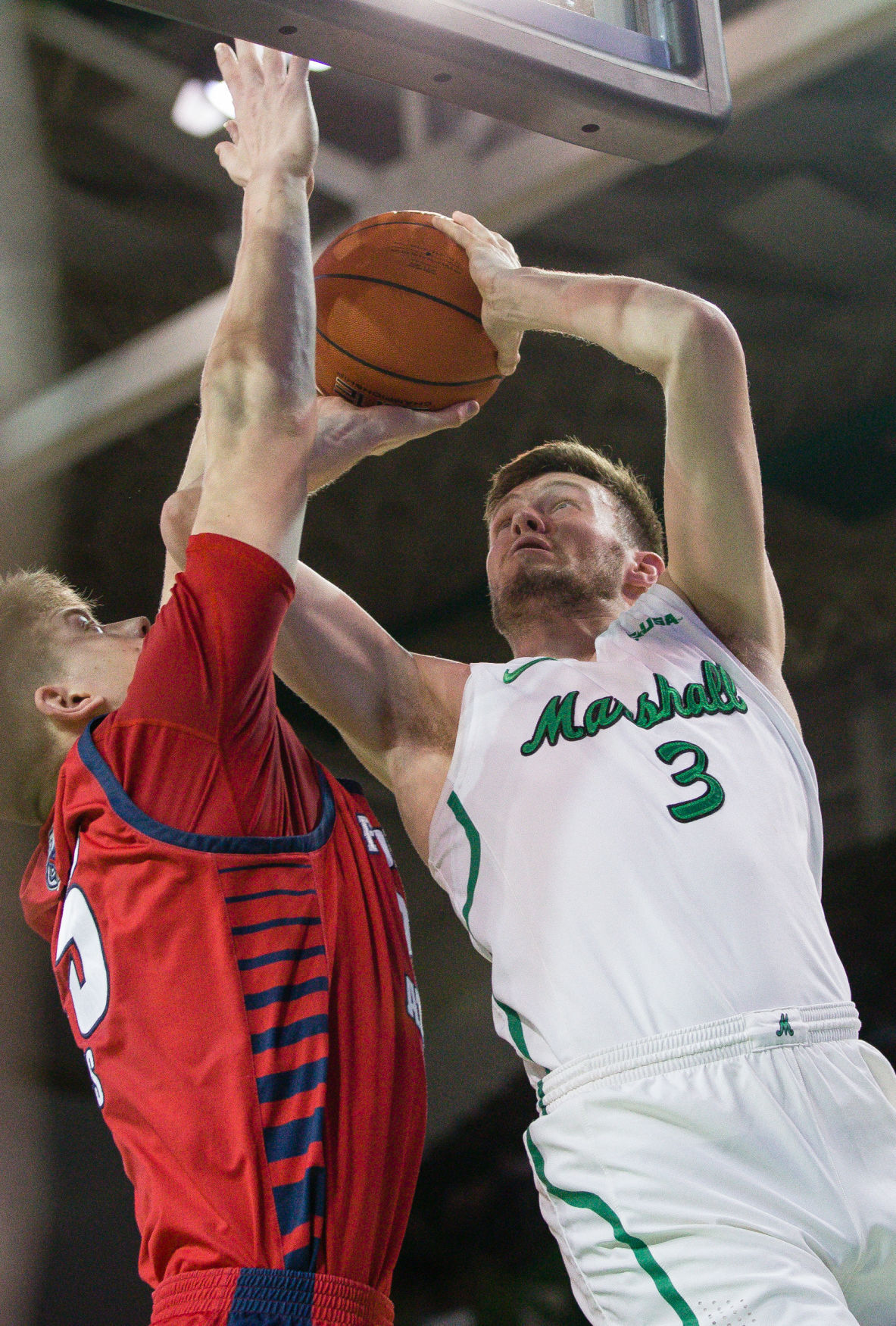 Marshall's Jannson Williams (3) puts up a shot against Florida Atlantic's Karlis Silins (25) during an NCAA men’s basketball game on Wednesday, March 6, 2020, at the Cam Henderson Center in Huntington, W.Va.

Marshall’s Jannson Williams (3) grabs a rebound as the Herd takes on Florida Atlantic during an NCAA men’s basketball game on March 6 at the Cam Henderson Center in Huntington, W.Va.

Marshall's Jannson Williams (3) puts up a shot against Florida Atlantic's Karlis Silins (25) during an NCAA men’s basketball game on Wednesday, March 6, 2020, at the Cam Henderson Center in Huntington, W.Va.

HUNTINGTON — Marshall forward Jannson Williams knows well how difficult the 2020 year has been for all involved in sports.

Williams, a 6-foot-9 senior from Newnan, Georgia, has experienced difficulties before, however.

Last year at this time, Williams was going through inner struggles of adjusting to new-found roles. Those mental difficulties contributed to a lack of energy on the floor, which translated to early-season struggles for one of the Herd’s top shooters.

As head coach Dan D’Antoni pointed out on Monday, however, Williams has turned last year’s struggles into this year’s lessons.

“Last year, he didn’t think I liked him,” D’Antoni said. “It wasn’t that I didn’t like him. I wasn’t real happy with what he was doing. This year, he’s making it easy, he makes it fun. He’s down and working and he makes shots because of it.”

With Marshall’s team going through adversity in the preseason due to everything in the COVID-19 era of college sports, mental focus is more important than ever.

Williams spoke recently in interviews about how the team has come together stronger to make it through those difficulties.

“I’m very thankful that we have such a great team that I can go on this journey with,” Williams said. “We all want to play so bad and I think we’re going to do a really good job this year.”

D’Antoni pointed to Williams as one of the key leaders whose focus and energy is where it needs to be.

“Last year, he came and he wasn’t like that,” D’Antoni said. “It took him to the end of the year, and what started first was that he started playing hard. Then, his shot started going down. Now, he’s come in and he’s playing hard at the beginning, and his shots are going down. I’m hoping, got my fingers crossed for the young man.”

Williams said that his game is at its peak as the Herd enters this season. He noted that he’s improved his ability to handle the basketball when needed and that his transition game has also improved.

“I’m in the best shape of my life right now,” Williams said. “It’s really exciting to see and look forward to for the season.”

The physical changes have come from a change in mentality with Williams acknowledging that he’s more than just a 3-point shooter for the Herd — something D’Antoni said he started to accept in the middle of conference play last season.

Prior to last season, Williams was surrounded by Jon Elmore and C.J. Burks — two of Marshall’s all-time best scorers who got to the bucket regularly. Williams was able to find open spots from those guys and knock down shots while primarily being a key help-side defender for the Herd, as well.

In 2019-20, however, Williams’ contributions in rebounding and overall defense were as important as his scoring, which meant an increase in energy and demands from himself as a player.

The correlations between Williams’ contributions in other areas and how they affected his scoring are evident.

Williams scored in double-figures in eight games for the Herd last season.

In all eight of those games, Williams collected at least five rebounds and also averaged 2.6 blocks, showing the correlation between effort in all areas and scoring, according to D’Antoni.

Four of Williams’ eight double-figure games came in the final six contests of the year — a period in which the Herd went 5-1 to close the season.

That’s not a coincidence, either.

“They have to understand, being a competitor is beyond just being a skilled player,” D’Antoni said.

For D’Antoni to see that mental production from Williams early within Marshall’s sessions is a welcome sight to the veteran coach who is relying on the team’s experience to overcome a limited preseason.

He knows Williams’ ability to fill it up in key times when he’s locked in.

That’s been seen against top-tier opponents, such as Florida and Maryland, big shots in the NCAA tournament and game-winners in rivalry games.

D’Antoni knows that when Williams is going well, so too is his team.

Therefore, there will be no one rooting harder for Williams’ success than D’Antoni as the season opens up.

“Listen, I’m a coach, but I’m also rooting for these young men, especially when they’ve earned it,” D’Antoni said. “He’s earned it this year.”