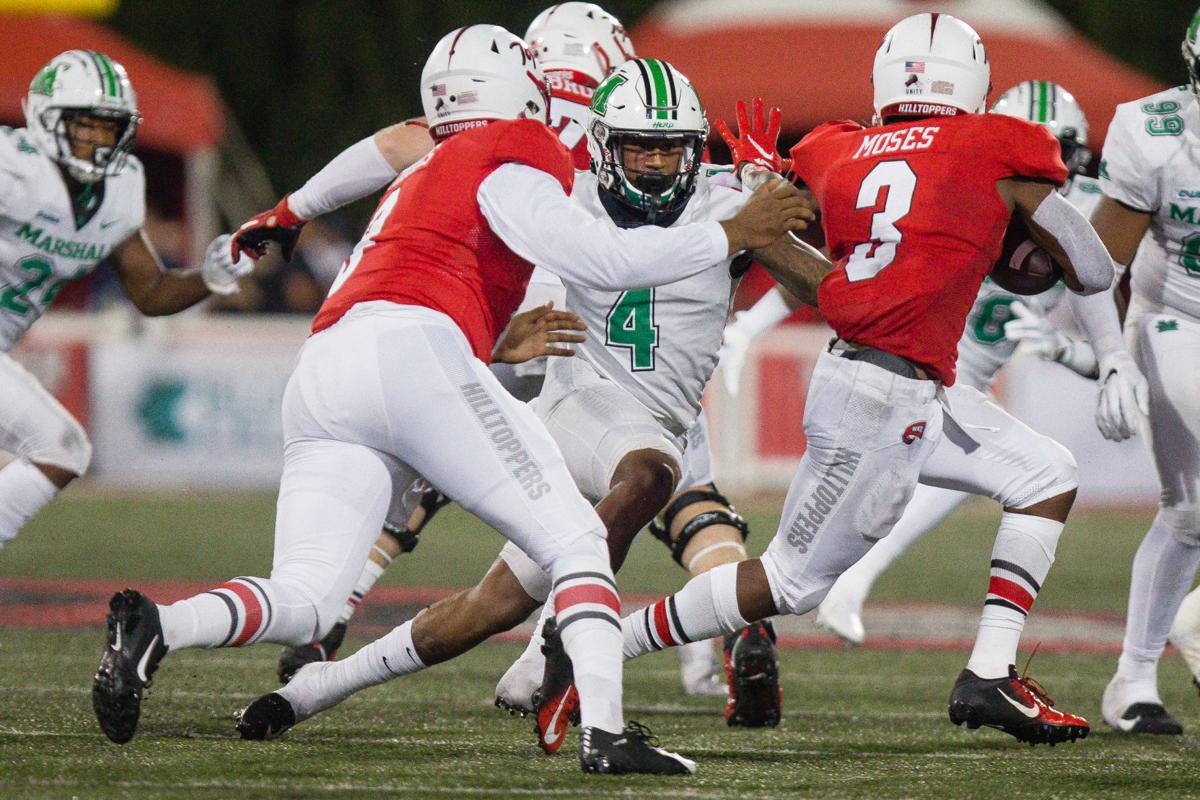 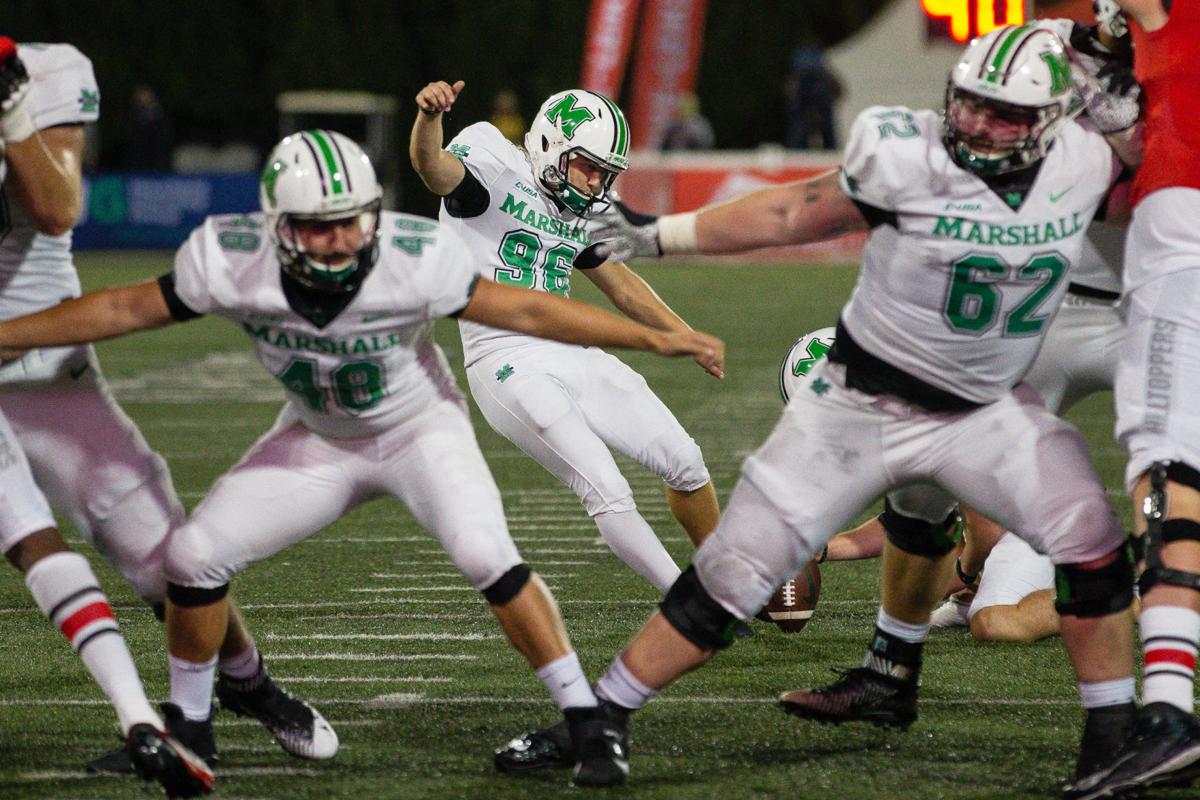 Marshall’s Shane Ciucci sends a kick through the uprights for a field goal as the Herd takes on Western Kentucky in a Conference USA football game Oct. 10 at Houchens-Smith Stadium in Bowling Green, Ky.

Marshall’s Shane Ciucci sends a kick through the uprights for a field goal as the Herd takes on Western Kentucky in a Conference USA football game Oct. 10 at Houchens-Smith Stadium in Bowling Green, Ky.

BOWLING GREEN, Ky. — Marshall set out to make a statement to the rest of Conference USA in its league opener at Western Kentucky on Saturday night.

The Herd succeeded in doing just that, continuing its strong defensive start to the 2020 season by forcing three turnovers and turning them into 21 points in a 38-14 rout of the Hilltoppers at Houchens Industries/L.T. Smith Stadium.

“I was concerned about being off three weeks, being rusty and all that, but I thought our kids came out and we started fast like we always try to do,” Marshall head coach Doc Holliday said.

For the third time in three games, Marshall’s defense did not allow 100 yards rushing to its opponent, limiting the Hilltoppers to just 80 yards rushing, which included hounding WKU quarterback Tyrrell Pigrome.

The Maryland transfer struggled against the Herd defense, never getting into a rhythm with his legs or his arm as Marshall forced him into three turnovers — all fumbles — which all led to touchdowns.

Tavante Beckett turned into the beneficiary, recovering all three of those fumbles, which tied him for a program record with two other players.

Beckett’s third recovery was a scoop-and-score as he raced 38 yards untouched to make it a 35-point lead. Shane Ciucci’s 28-yard field goal ended the Herd’s scoring.

One week after earning Conference USA Player of the Week honors, Pigrome was benched following Beckett’s fumble return for a score. He had just 61 yards passing and 28 rushing.

Western Kentucky did not eclipse the 100-yard mark in the game until there was just one minute remaining in the third quarter.

“I thought our kids really tackled well,” Holliday said. “We didn’t miss a whole lot of tackles in space, which was good against that quarterback and a couple of the players they have.”

Despite it being the first road game for Marshall and quarterback Grant Wells, the Herd had no such offensive troubles, keeping a balanced offense throughout.

Brenden Knox celebrated his birthday with three first-half touchdowns and ended the night with 107 yards on the ground while Wells was 16 of 22 for 162 yards while not turning the ball over in the first road game of his career.

“I’m really proud of Grant,” Holliday said. “He really took care of the ball. I think it was a plus-3 turnover margin for us. We didn’t turn the ball over, which was huge.”

Holliday set to make a statement early with Marshall as the aggressor and the move worked as it took the Herd just two plays to find the end zone after taking possession.

Wells found wide receiver Broc Thompson for 30 yards on the first play and Knox raced 45 yards for a score on the next play to give the Herd an early advantage.

“Since the weather was nice, we decided to take the ball,” Holliday said. “We talk to the team all the time about starting fast, and we started just about as fast as we could, taking that ball right down the field to score, which was good for us.”

After a 5-yard score by Sheldon Evans made it 14-0 late in the first, the Herd tacked on a pair of Knox scores within two minutes of each other late in the first half to go into the locker room leading 28-0.

Knox scored on a 1-yard plunge set up by a 40-yard Wells-to-Thompson connection with 2:14 left before halftime and the Herd junior notched the hat trick with 27 seconds remaining before the break after an Abraham Beauplan hit forced a Pigrome fumble that Beckett found.

Thompson finished with four receptions for 94 yards to lead Marshall.

After halftime, Beckett later matched Knox with a hat trick of his own, getting his third fumble recovery on Western Kentucky’s second series of the third quarter to end any threat of a comeback by the Hilltoppers.

Field position was a huge asset for the Herd in Saturday’s win with the Herd’s average starting field position being its own 43-yard line. Much of that credit went to punt returner Talik Keaton, who averaged 13 yards per return and punter Robert LeFevre who pinned the Hilltoppers inside their own 3-yard line with a punt as well.

“We’re playing really well as a team in all three phases and we’ve done that for three weeks in a row now,” Holliday said. “If we can continue to do that, we have a chance.”

While Pigrome was ineffective for the Hilltoppers, backup Kevaris Thomas showed some promise for Western Kentucky, entering the game and engineering a pair of scoring drives.

His 2-yard run got the Hilltoppers on the board on the final play of the third quarter and then he connected with Dalvin Smith on a 26-yard touchdown with six seconds remaining.

Marshall heads on the road against next week, traveling to Ruston, Louisiana, to take on Louisiana Tech in a 6 p.m. contest next Saturday.

Marshall takes on Western Kentucky during an NCAA football game on Saturday, Oct. 10, 2020, at Houchens-Smith Stadium in Bowling Green, Ky.