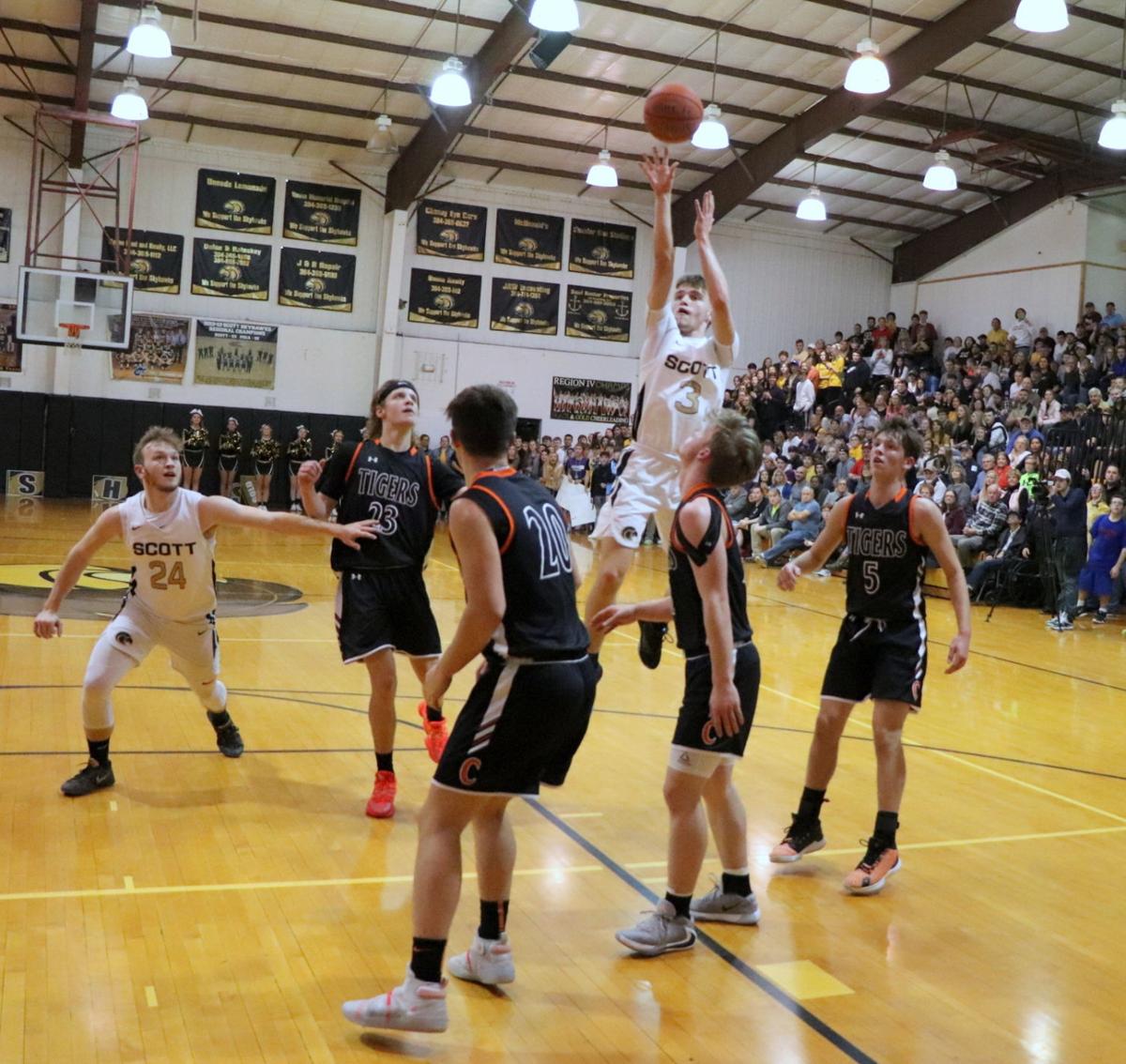 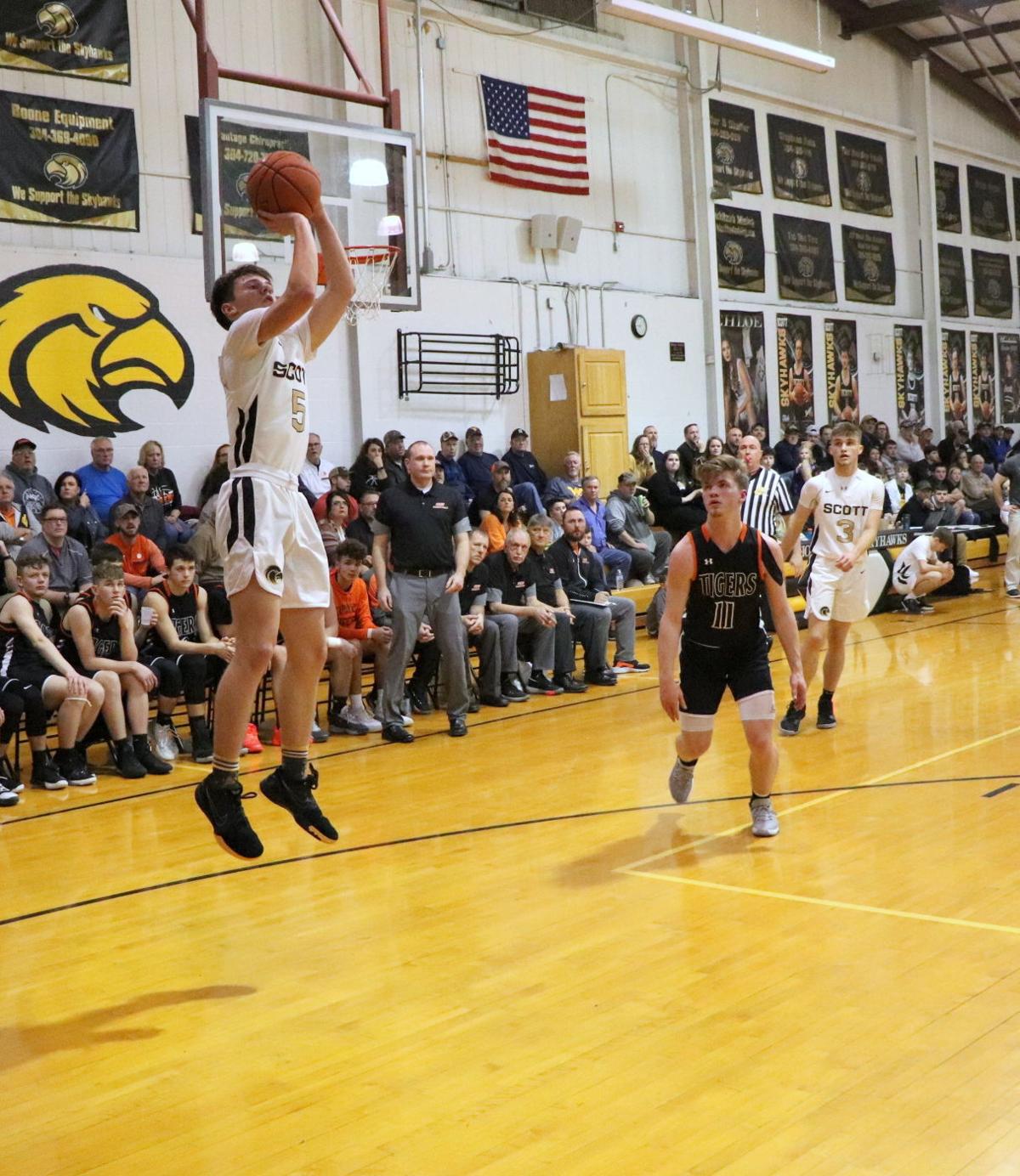 WEST MADISON — Scott High’s Gavin Cooper pulled down a rebound on a missed free throw from Chapmanville’s Andrew Shull and went the length of the court for what would have been a game-winning layup with less than a second on the clock.

But he was called for a charging foul and Chapmanville — who is 12-2 and winner of 12 of its last 13 contests — won the game, 52-51 in a battle of ranked Class AA Cardinal Conference squads.

“It was the right call,” said Scott Coach Shawn Ballard.

Chapmanville Coach Brad Napier said he was proud of how his team played the game on this night.

“I thought both teams played hard and had runs in this game and both teams are pretty good teams,” he said. “It was a good basketball game, but we knew it would be.”

No. 2 Chapmanville was noticeably guarding the perimeter in the contest, forcing Scott inside, and the squads played to an 8-8 tie in the opening frame, as Shull opened the scoring up with a 3-point shot from the wing for the Tigers.

No. 10 Scott (10-6), which came into the game having won its last five games, started the second off with a three-ball of its own thanks to Jon Hon Hamilton, who netted three in the game. The Skyhawks saw balanced scoring in the quarter from Landon Stone, Gavin Cooper, Caleb Dingess and Jagger Bell, as well.

Chapmanville edged out to a slim lead at intermission thanks to a six-point quarter from Brady Dalton and Shull, and the Tigers led 28-23.

The third proved to be a sloppy quarter for both teams, but the Tigers managed to extend their lead to 44-37 on the back of a 10-point explosion from Shull, who scored from the perimeter off of an offensive rebound and in transition off of a turnover.

The lead was extended to 11 points before Scott made a late run midway through the final frame.

The Skyhawks went on a 19-8 run led by Hamilton’s two 3-point shots made.

Scott’s Jagger Bell was double-teamed in the fourth and Scott saw clutch buckets from Dingess in the quarter that proved to be tough points in the paint.

With less than two minutes to go, Chapmanville was whistled for a technical foul and Hamilton buried both shots. After a trey from Obinna Anochili-Killen with the game tied from the wing put the Tigers up by three, Scott saw a bucket from Dingess set up what would be the final play of the night when a foul put Shull on the line.

Ballard said he hopes the game will give his team confidence and that they will play their best basketball in February and March.

“Overall, we played hard with the exception of a couple of mental lapses and executed our defensive game plan,” Ballard said. “Offensively, we weren’t as crisp as we want to be and we had our opportunities and we didn’t capitalize. The outcome wasn’t what we wanted, but we proved to ourselves that we are capable of beating anyone in the state and we didn’t even play our best.”

Napier said rankings aren’t important to him just yet.

“It isn’t important until February, when the seeding starts coming out,” he said.