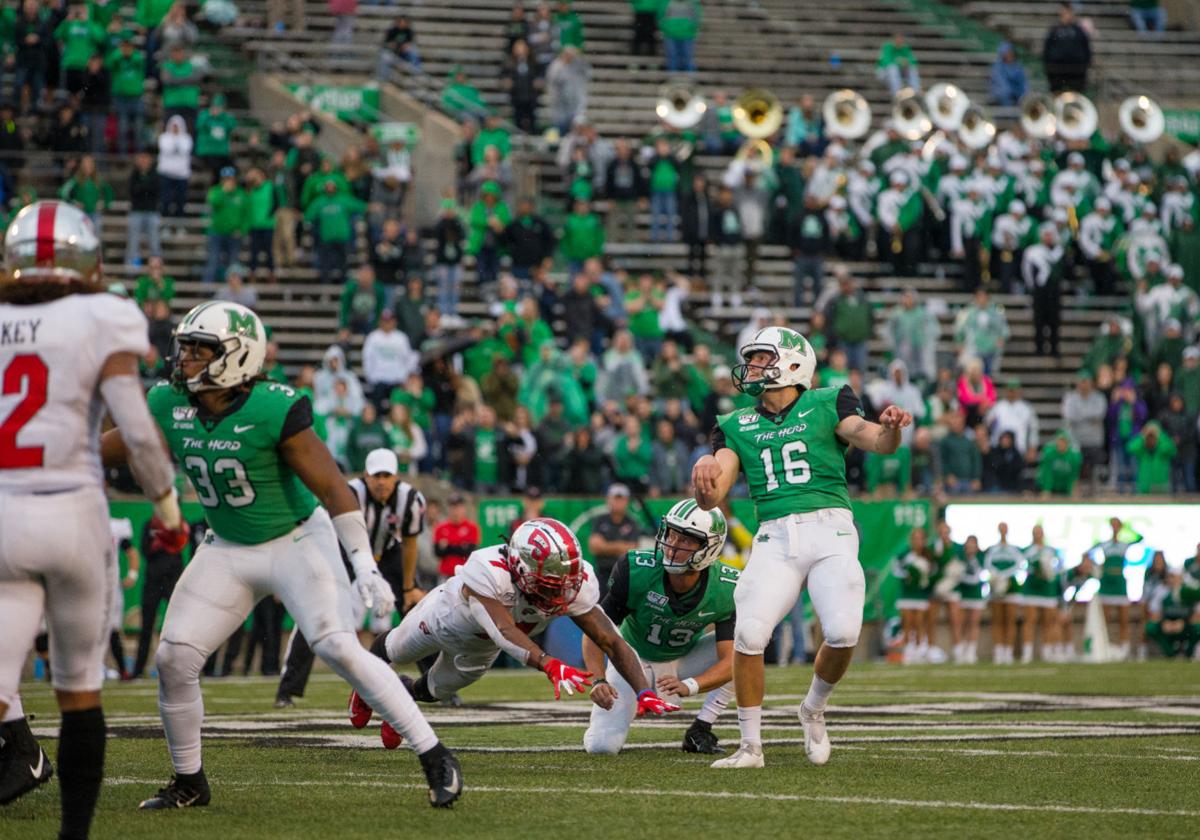 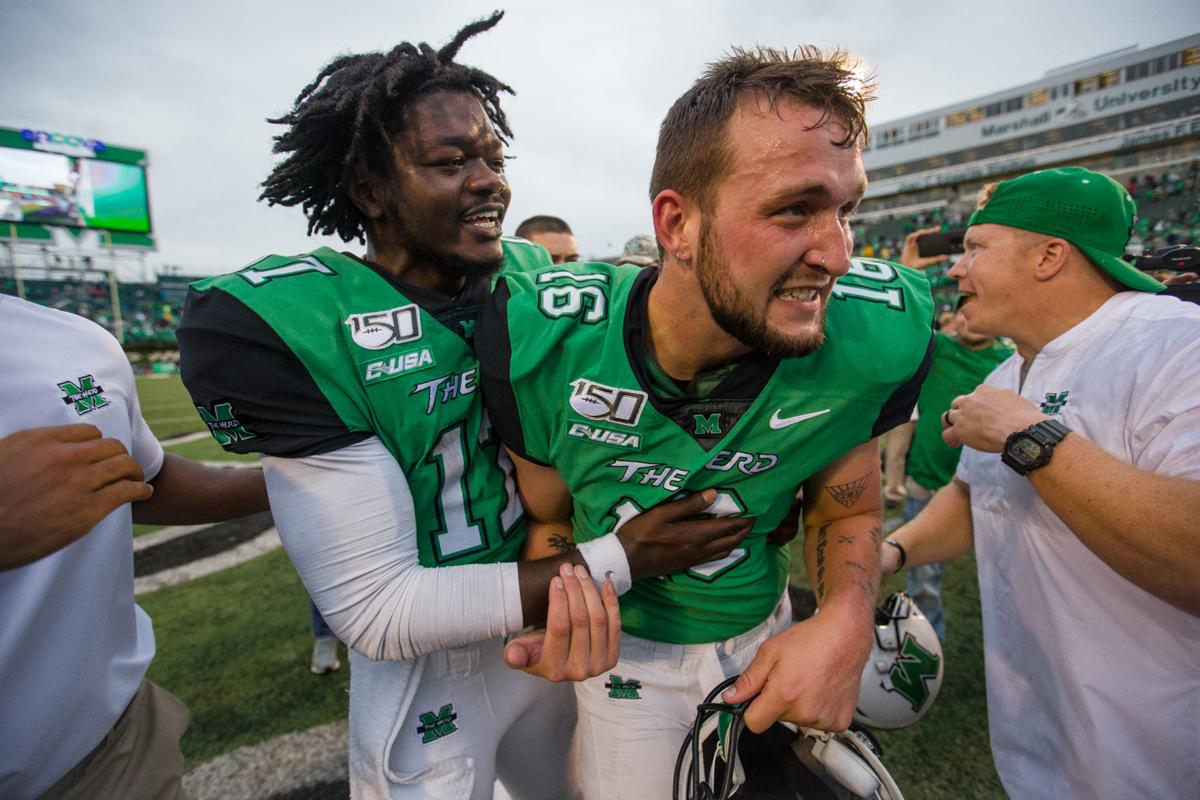 HUNTINGTON — On Tuesday afternoon, Marshall kicker Justin Rohrwasser took to a field in western New York with one goal in mind: hit his target.

On that day, the target was the base of a vertical light pole overlooking the field — a target area of around 4 to 5 feet.

Rohrwasser went through an array of kicks — from 33 to 60 yards — keeping the ball as close to that target as possible. He knew if he could hit that target, he can keep it between the 18 feet, 6 inches of most NFL stadiums.

That, of course, is Rohrwasser’s next target as he hopes to get the call from a team this weekend as the 2020 NFL Draft commences, starting Thursday.

There may be a COVID-19 crisis going on — especially in his home state of New York, which has been severely hit by the virus — but that doesn’t keep Rohrwasser from staying prepared to realize his dreams.

“I’m doing as much as I can and getting as much training as I can so I’m in the groove when I get my opportunity. I’ll be ready.”

Currently, Rohrwasser is living in Buffalo with good friend and fellow NFL Draft hopeful Brendan Cole, a punter from Mercyhurst College, which helps with training. The two also engage with their kicking coach, but even that engagement shows how different that training during the COVID-19 pandemic has been.

Their kicking coach, who has a young son, stays off to the side of the field, yelling across to them instead of being close by — so as not to risk infection to his family. Still, he offers guidance while keeping his distance, which Rohrwasser said has been invaluable.

“We’re surprisingly getting really good training in, although the conditions aren’t exactly favorable,” Rohrwasser said. “This is one of those times that you have to do what you have to do. This is my job and I have to make sure I’m ready.”

If that means going into an empty field and finding a makeshift target while going through the mental and physical processes associated with kicking, that’s what Rohrwasser is going to do. That attention to detail is the difference in taking his kicking career to the next level.

Rohrwasser took a giant step toward executing every fine detail in the 2019 season when he went 18 of 21 on field goal attempts with a long of 53 yards while also serving as the Herd’s kickoff specialist. That 53-yard field goal came on a game-winner in the rain against rival Western Kentucky to give Marshall a 26-23 Homecoming win. It also put the cap on a day on which he went 4 for 4 in the weather-hindered contest.

Rohrwasser’s efforts earned him Conference USA’s Special Teams Player of the Year award and put him on the map for many NFL scouts, who saw him perform on Marshall’s Pro Day on March 11 — the same day the World Health Organization declared COVID-19 as a pandemic. On that day in Huntington, Rohrwasser shined with a 12-of-13 performance on field goal attempts, making everything from 33 to 58 yards inside the Chris Cline Athletic Complex.

According to HerdZone.com’s Chuck McGill, his lone miss on the day was an attempt from 66 yards that had the distance, but missed to the right by inches.

That Pro Day came off a time in which Rohrwasser had gained momentum by winning the field goal competition at the Zauner Combine, which is a specialists combine for college seniors going into the NFL Draft.

For Rohrwasser, his name had gotten out there after winning the field goal competition, but there were still elements — including his kickoffs — that he wanted to improve. He took the coaching from that event in the first week of March and applied it to his Pro Day efforts less than a week later — sending a clear message to scouts in attendance.

“I loved that I had another opportunity to show special teams coaches and scouts that not only am I good enough to play in the NFL, but I can improve when I see things that weren’t as solid as they could’ve been,” Rohrwasser said. “Going from the Zauner Combine into Pro Day, I really wanted to make sure that kickoffs were exactly where I wanted them to be and I made those adjustments.”

His kickoffs for Pro Day averaged 9 to 10 yards deep in the end zone and was able to show accuracy with high hang time (4.2 seconds) when asked to put kickoffs on the goal line.

“That’s exactly where they should be and that’s where I expect it to be at all times,” Rohrwasser said.

“It’s been great building relationships with these coaches and talking to them so they can get to know me,” Rohrwasser said. “I’m going into it just hoping I get the opportunity to go compete and to take advantage of that opportunity.”

No matter the situation, Rohrwasser wants to show he can perform in the clutch on the biggest stage — an area he feels has become his specialty.

On the game-winner against Western Kentucky, the Hilltoppers called a pair of timeouts to put the pressure on Rohrwasser, who delivered an unwavering kick through the uprights for the Homecoming victory.

For Rohrwasser, the success of that kick and this NFL Draft process get back to the same mentality.

“You have to have the mindset that nothing is going to get in your way — a coach icing you three times, or a worldwide lockdown,” Rohrwasser said. “If you have a goal and you have a system of working toward your goal, you just have to stick with your system and training and remember what got you where you are: confidence, hard work and making sure you’re on the top of your game.

“You can’t let it slip, no matter what. If I have to go in my small backyard in upstate New York and kick 100 field goals into the trees, I’ll do that. It doesn’t matter where it is, I’m going to be ready. I’m not letting any opportunity slip.”