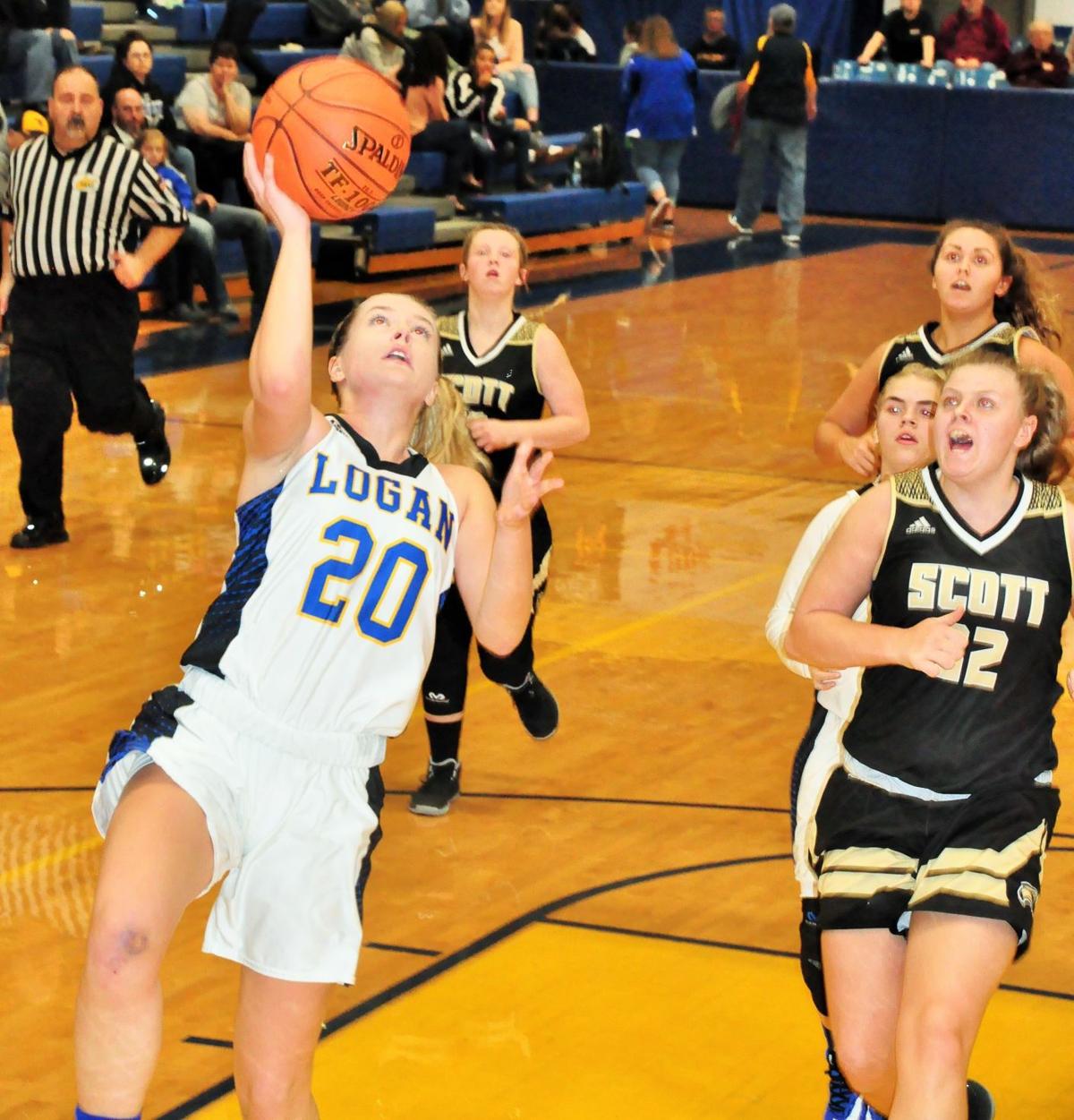 Logan High School’s Peyton Ilderton (20) glides in for a layup in the Lady Cats’ 70-36 win over Scott. 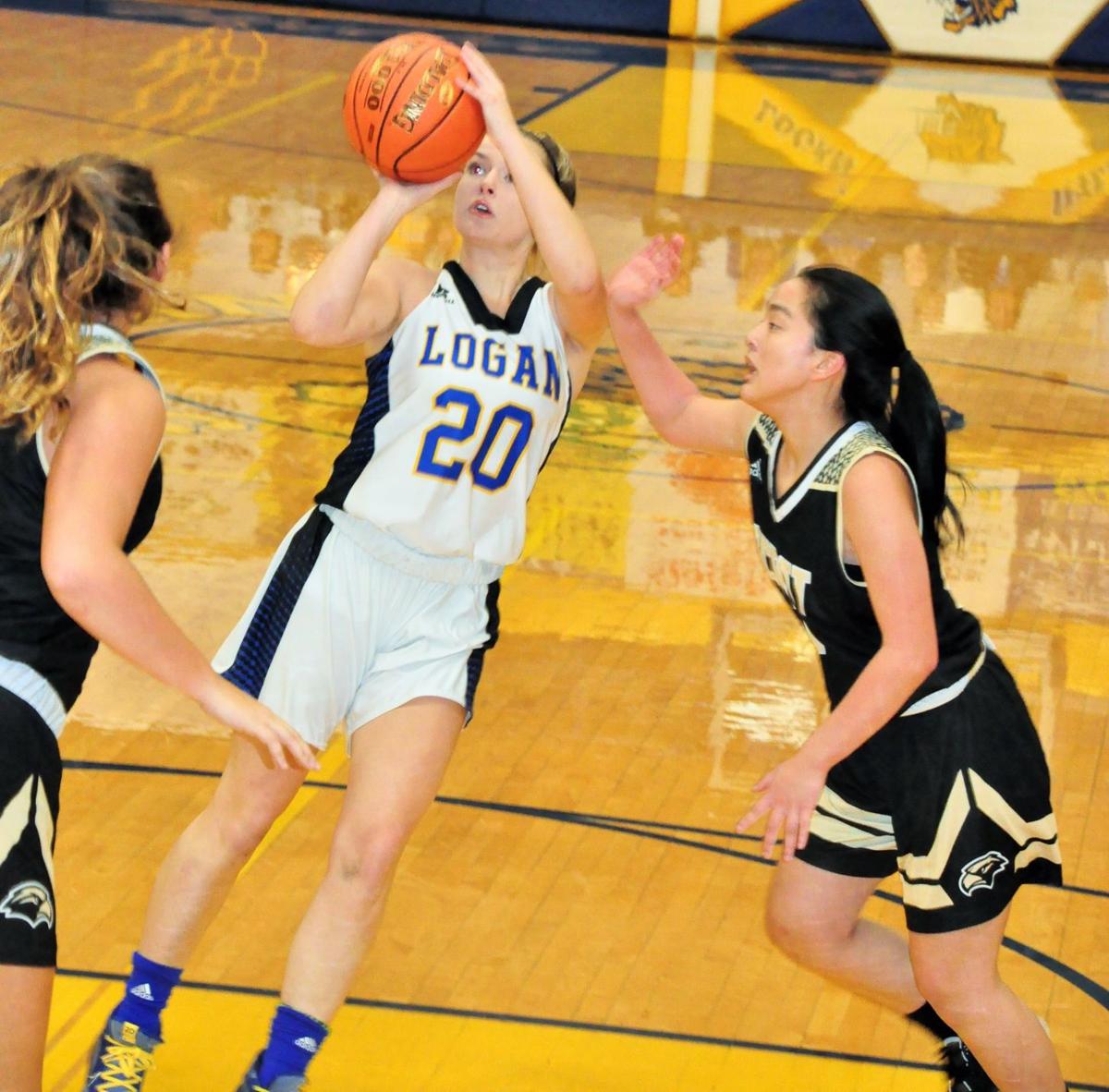 Logan High School’s Peyton Ilderton (20) takes a shot in the Lady Cats’ 70-36 win over Scott on Friday at Logan. 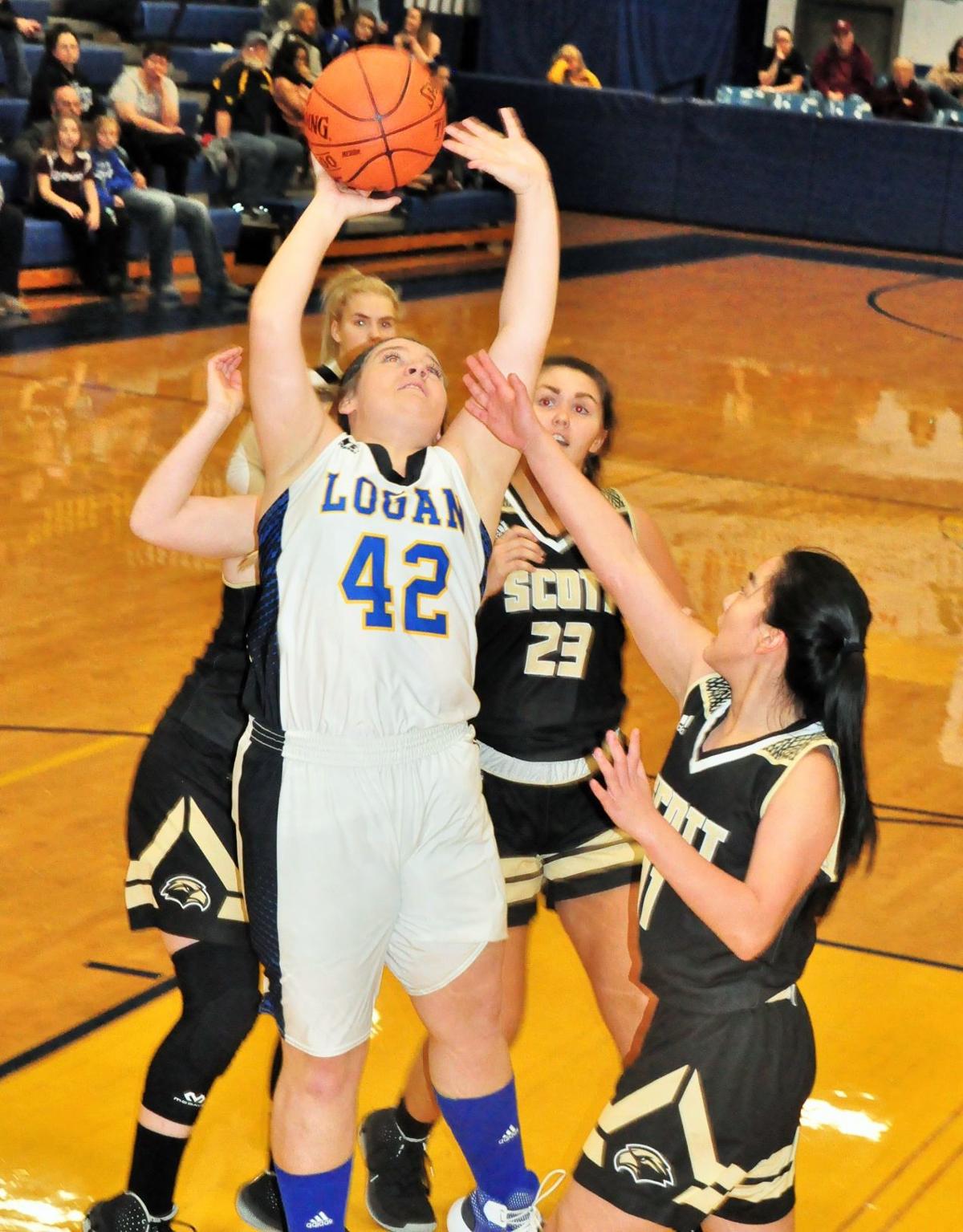 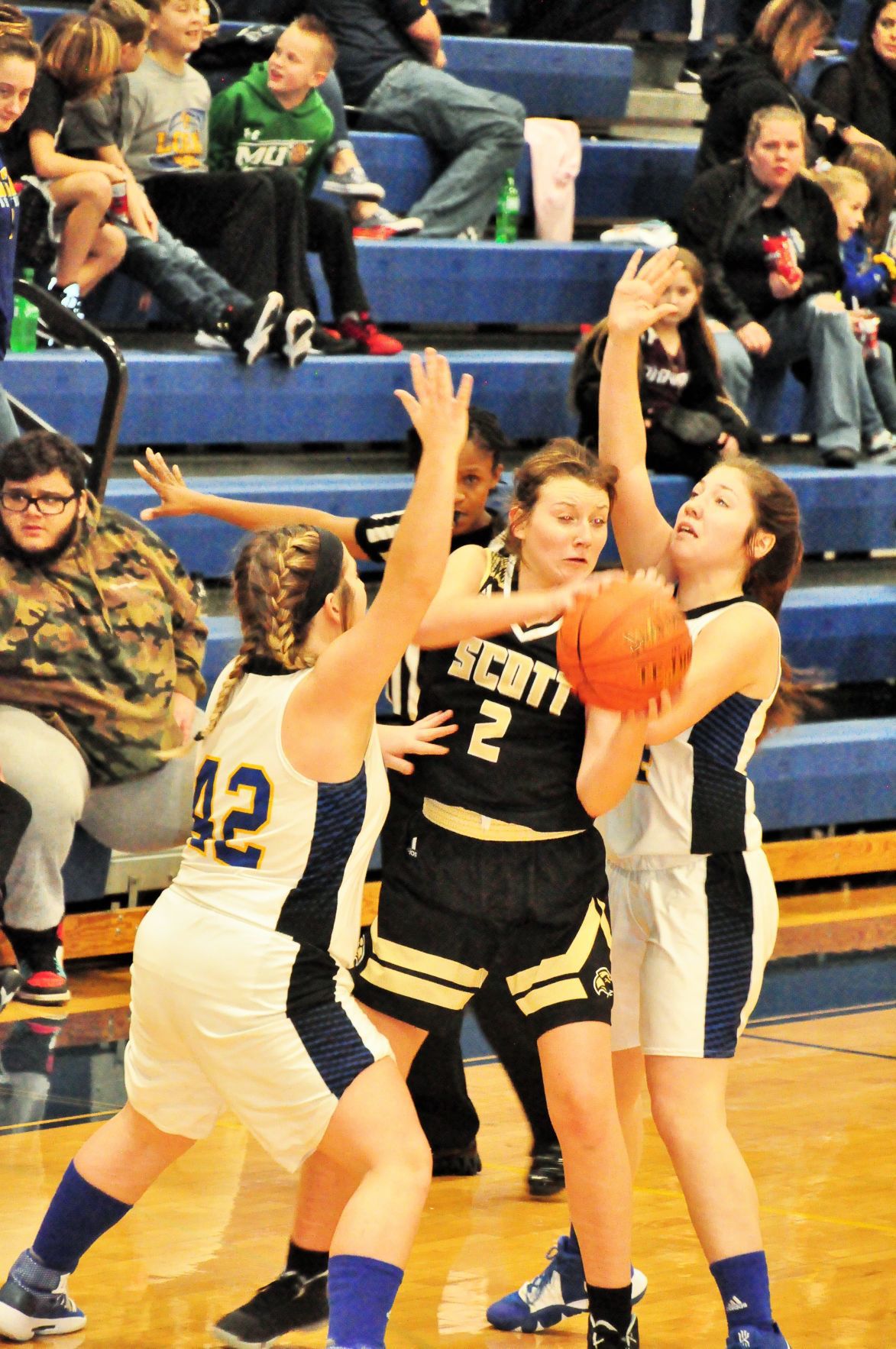 Scott girls fell 70-36 to the Logan Wildcats on Friday on the first night of the Wildcat Classic Hoops Showcase at Logan’s Willie Akers Arena. 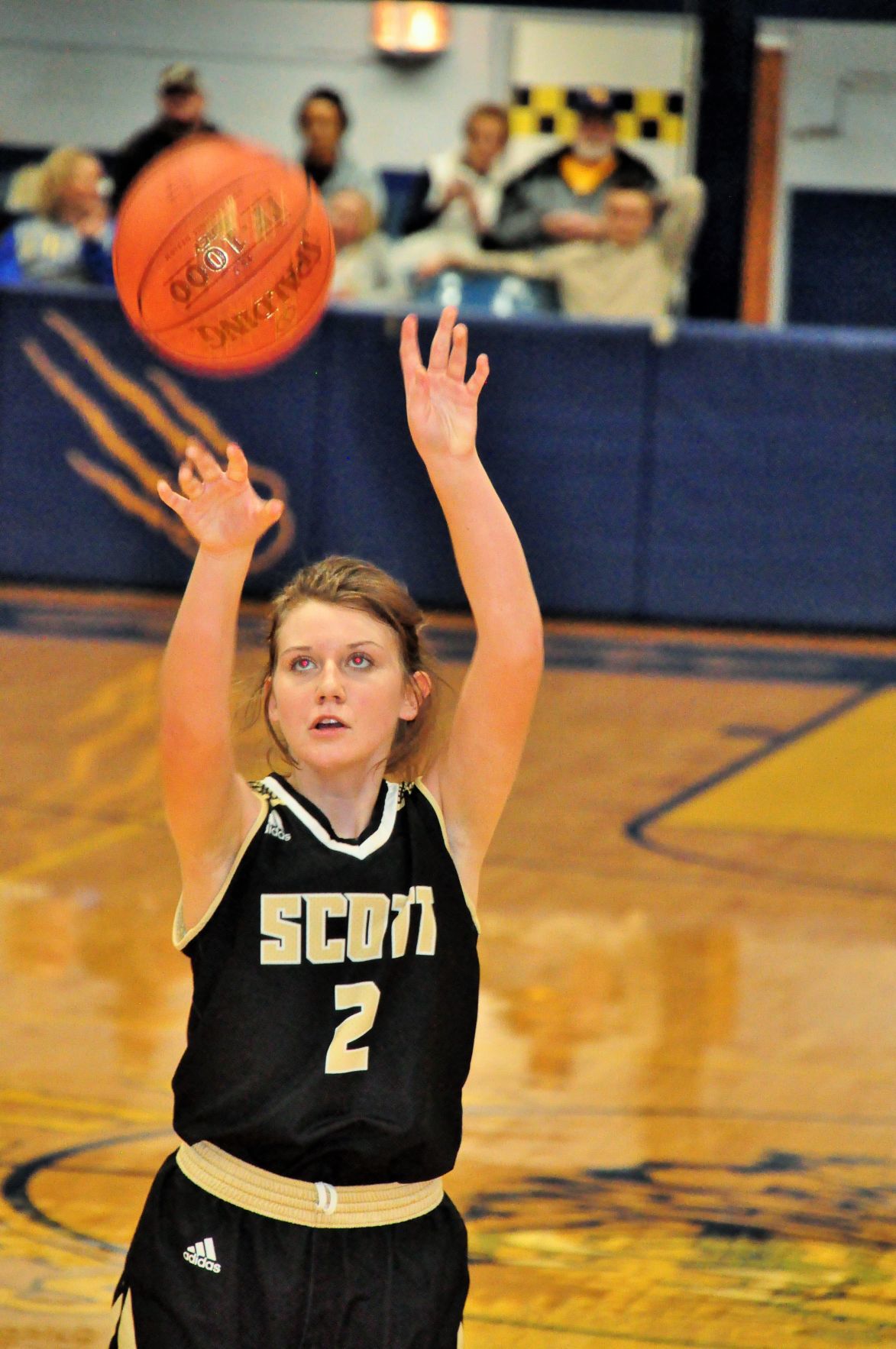 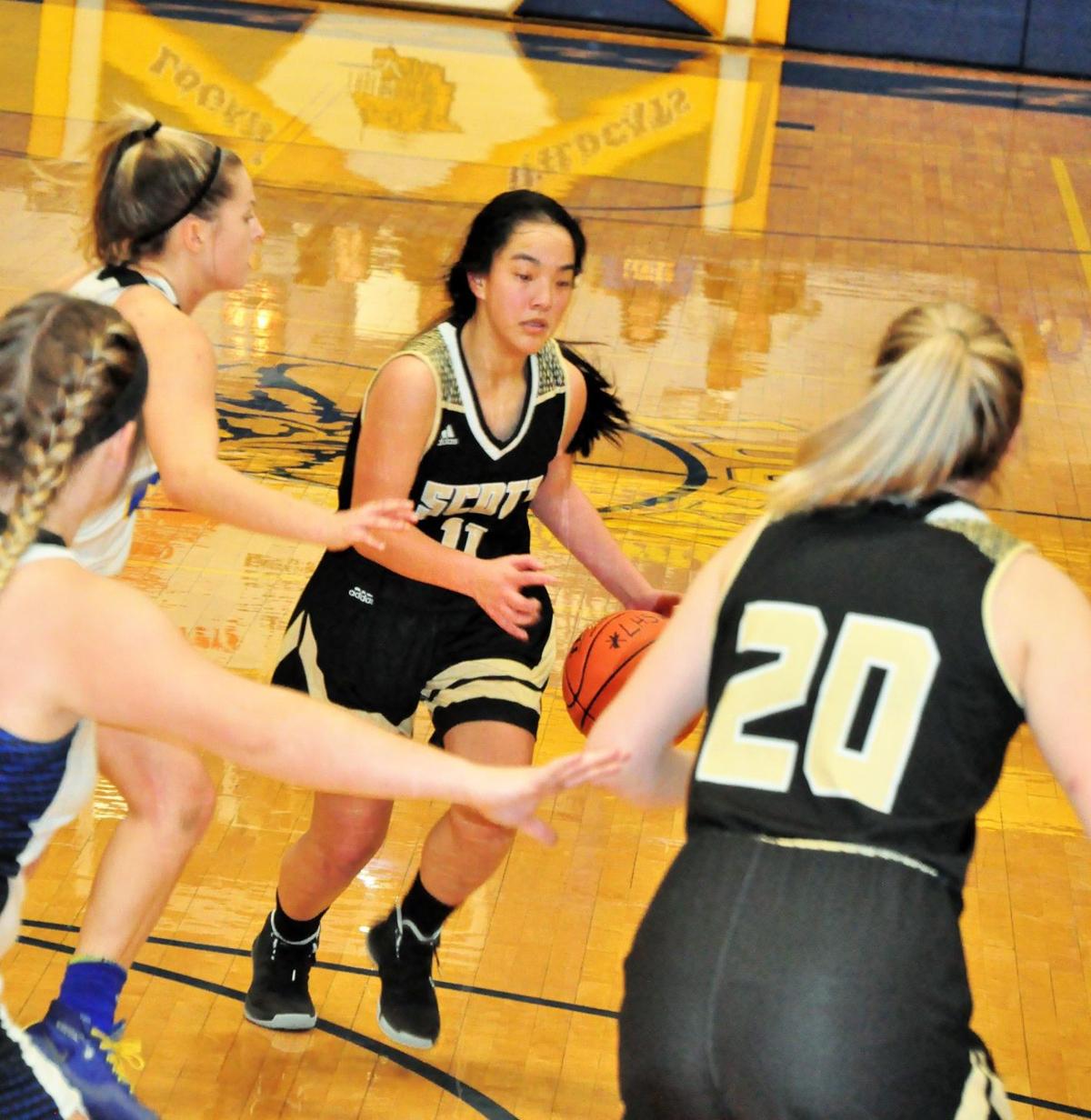 Logan High School’s Peyton Ilderton (20) glides in for a layup in the Lady Cats’ 70-36 win over Scott.

Logan High School’s Peyton Ilderton (20) takes a shot in the Lady Cats’ 70-36 win over Scott on Friday at Logan.

Scott girls fell 70-36 to the Logan Wildcats on Friday on the first night of the Wildcat Classic Hoops Showcase at Logan’s Willie Akers Arena.

LOGAN — After rolling to a season opening win over Man and then dropping their next four games the Logan High School girls’ basketball team was in dire need of getting back into the win column.

The Lady Cats did just that on Friday night, ripping sectional rival Scott, 70-36, on the first night of the Wildcat Classic Hoops Showcase at Logan’s Willie Akers Arena.

The Lady Cats raced out to a 25-13 lead after the first quarter and coasted.

Peyton Ilderton led Logan with a 24-point effort. Two other Lady Cats broke into double digits in scoring as Jill Tothe drained four 3-pointers and finished with 14 points, and Raegan Quick closed out the night with 10 points.

Autumn Adkins drilled a pair of treys and had nine points. Emma Elkins and Rylee Conn each had four points, Natalie Blankenship had three and Breanna Buskirk had two.

It was a much needed win for Logan, Lady Cats’ coach Kevin Gertz said.

“We got what we wanted to accomplish tonight,” Gertz said. “One, we got a win. We had been on a four-game losing streak. We’re not playing bad basketball but we needed a win. We got to rest a lot of people and we got a lot of people playing. It was a great win. We shot the ball well tonight. Jill shot it real well and so did Raegan. Natalie is playing better and Peyton does what Peyton does. Emma played well and I thought that it was one of her better all-around games. She’s not a big-time scorer but she can score.

“Autumn Adkins shot the ball real well and Rylee played well. Breanna Buskirk came in and scored two points and that made everyone happy on our team. Those girls love her to death. She hasn’t played organized basketball before, just club teams but she’s really really improved and she’s worked so hard.”

Scott led 5-1 early in the game but Logan rallied and then the rout was on.

Ilderton tied the game at 5-all with a drive to the lane off a Scott turnover.

It was soon 10-5 Logan after a Tothe 3. She later hit another 3 and Ilderton scored on a layup and it was 21-10 Logan with 53 seconds to go in the opening stanza.

Ilderton scored on another layup at the buzzer, giving Logan a 25-13 lead after one.

The Lady Cats poured in on in the second quarter.

A 3-pointer by Adkins at the top of the key made it 33-15 with 5:23 to go until halftime. Quick then completed an old-fashioned three-point play as the lead swelled to 36-13.

Later, another triple by Tothe expanded the lead to 39-15 with 3:29 remaining.

Logan led by 21 at the half and then cruised in the final two quarters.

Sitting on the Logan bench was newcomer Abbie Myers, a sophomore and recent transfer from Chapmanville.

Myers, a point guard, played her freshman season at CRHS and also the first semester of this season with the Lady Tigers.

She won’t suit up for Logan until next season, however, Gertz said.

“She’s a manager right now,” he said. “If she’s eligible to play next year that’s really going to make our team go because she’s such a good athlete. She’s fit in real well with these girls. Our middle school team played well today and I’m also looking forward to getting some of those girls for next season as well. Things are looking up for the Lady Wildcats.”

GEORGE WASHINGTON 82, LOGAN 38: The Logan girls took it on the chin on Saturday night in the final game of the inaugural Wildcat Hoops Classic Showcase with an 82-38 loss to Class AAA George Washington at Logan’s Willie Akers Arena.

“We were over-matched tonight,” Logan coach Kevin Gertz said. “We competed hard in the second half but you’re not going to beat a team that makes 14 3-pointers. I want to thank everyone that helped make this shootout a huge success for our program.”

Peyton Ilderton had 14 points to lead the Lady Cats.

Jill Tothe hit a trio of 3-pointers for nine points. Raegan Quick also had nine points on the night.

Autumn Adkins and Rylee Conn both had two points, while Natalie Blankenship and Emma Elkins each had one point.

Paul Adkins is the Sports Editor of the Logan Banner. Follow him on Twitter @PAdkinsBanner or email him at padkins@hdmediallc.com.