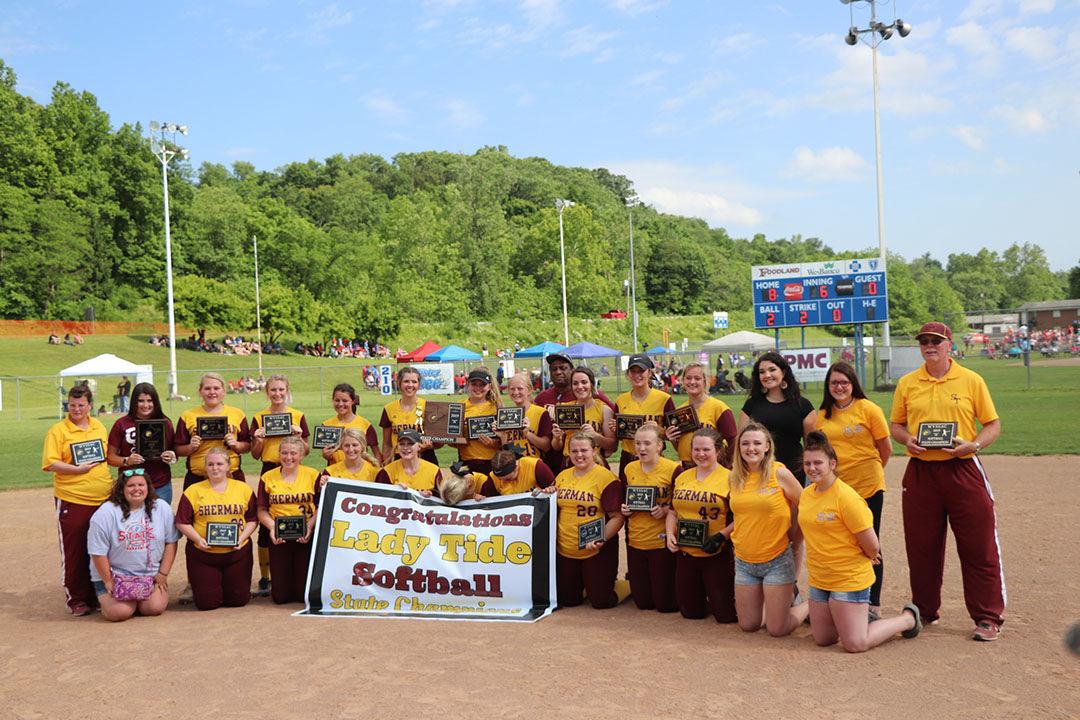 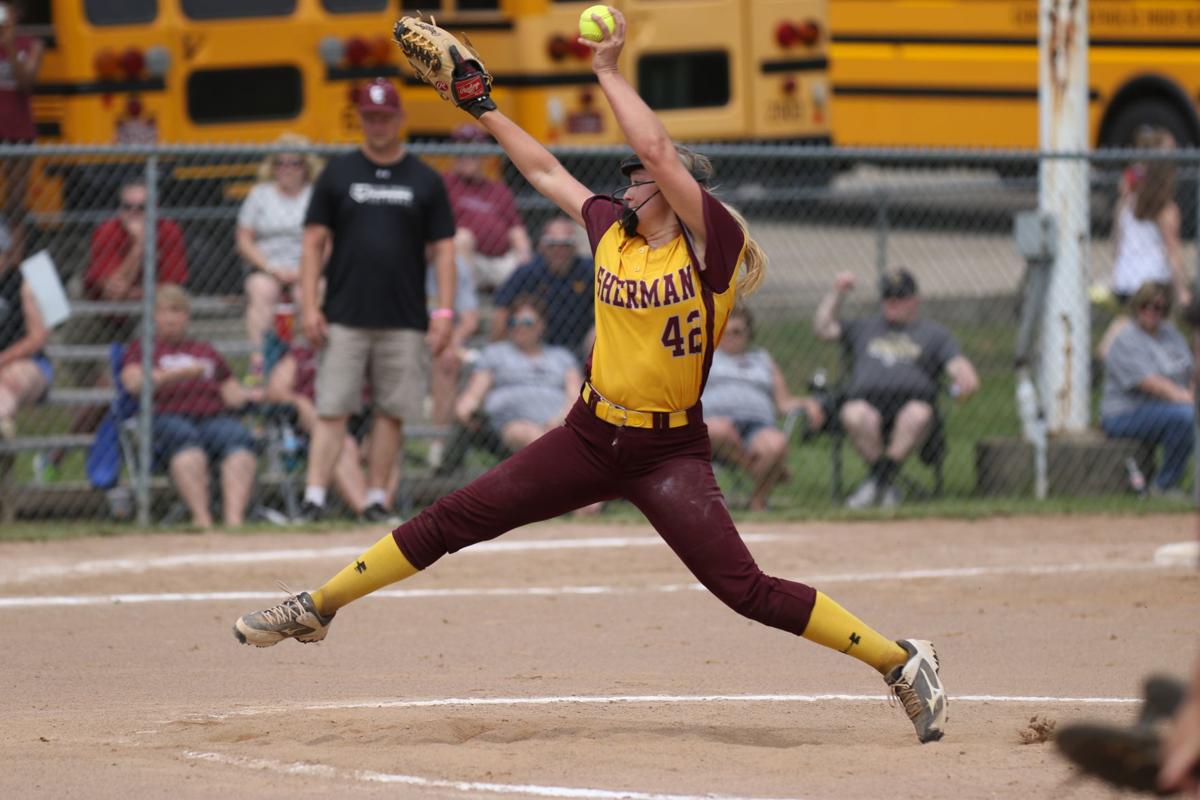 Autumn Thompson slings a pitch for Sherman in the 2019 state softball tournament. 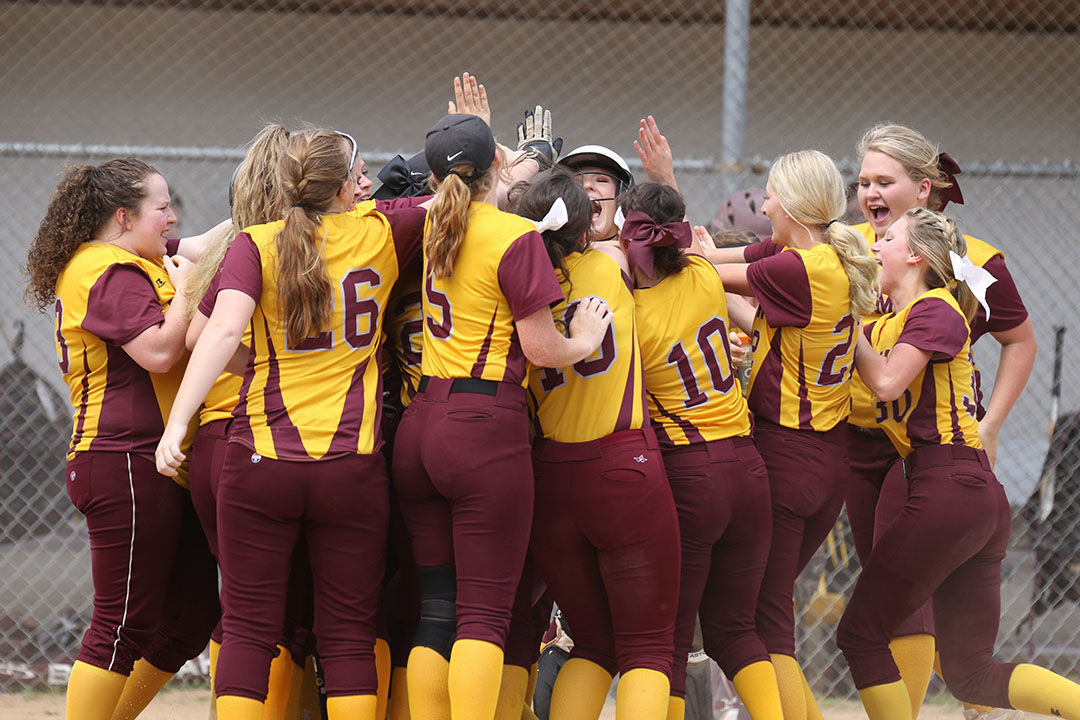 The Sherman High softball team celebrates after a state tournament victory in 2019.

Autumn Thompson slings a pitch for Sherman in the 2019 state softball tournament.

The Sherman High softball team celebrates after a state tournament victory in 2019.

SETH — When Sherman High’s softball team earned an 8-0 win over Wheeling Central in the Class A finals last spring, Lady Tide Coach Jim Henderson never thought the 2020 season would be in jeopardy of being played.

“You just don’t think of that happening in a thousand years,” he said. “But here we are.”

On the heels of the COVID-19 pandemic came the temporary closing of public schools, delay or possible suspension of all spring sports and a “stay at home” order from West Virginia Gov. Jim Justice that was put into play on March 23.

“I’m optimistic that we’ll get in a shortened season,” added Henderson. “The girls are doing things and working out on their own with a sibling or parent right now.”

Henderson said that, if the season is salvaged and play begins, he would ease his squad back into softball activities.

“We would begin rather lightly and make sure we stretch out real good,” he said. “They have youth on their side. It is my understanding that, as of right now, unless it changes, we’ll need to get our 15 days of practice in before we play our first game. We had just finished our first 10 days.”

Sherman boasts one of the most decorated student-athletes in school and Boone County history in pitcher Autumn Thompson. The hurler is the only athlete from Seth to notch a First Team All-State selection three years in a row and served as captain of the Class A squad in 2019.

All Thompson did in the post season was hurl a no hitter in the section championship game vs. Tug Valley and fired an 8-strikeout performance while belting a home run vs. Wahama to help punch the Lady Tide’s ticket to the state tournament.

She then proved to be a buzz saw for opposing hitters in posting a sub-one ERA through the tournament, where she was named to the All-Tournament squad along with current teammate Hailea Skeens and the graduated Katlyn Jenkins and Haylee Clendenin.

Thompson has experienced three-straight state tournaments and a state runner-up in 2017.

“She has been exceptional on and off of the field,” Henderson said. “The big positive for Autumn right now is that she has signed to play for West Virginia State University. Everything for us starts with Autumn.”

Thompson also serves as the team’s lead-off hitter while owning the season and career records for home runs in school history.

“People constantly ask me why I hit her leadoff,” Henderson said. “Why wouldn’t I? She’s either going to get a base hit, get walked or belt a home run about 70% of the time. We’ll have a base runner more times than not. I call her our Ricky Henderson. She led off a game with a home run four or five times last season. Why not hit her leadoff?”

Thompson’s sister, junior Chelsey Thompson, carries the team’s most consistent glove and will return to second base. The pair have been working out together at home.

“We’ve been throwing together and working out together, so that has been great,” Autumn Thompson said. “I think everyone really works toward that senior year and I remember as a freshman thinking about being a senior and it is weird not knowing what will happen with our season.”

The hurler carries a 4.2 GPA in the classroom and will carry 30 college credit hours to college through AP coursework. For the time being, her thoughts are on the diamond and getting back on the hill.

“We want the opportunity to repeat,” she said. “Our goal was to get back there. We feel that we can be even better and we’ve put the time in to be better.”

The student-athlete and team leader has been working on her own game — to the chagrin of Sherman opponents across the state.

“I’ve focused on increasing velocity but without hindering the control of my pitches,” she said. “Mainly, I want to hit my spots, regardless. My sister and I have both worked a lot in the off-season. We worked in the weight room three times a week. I’ve been working on a rise ball for three years and I finally feel like I have control of it. My drop curve is my best pitch and I think it has improved, too. I feel really good and I’m ready to go.”

Thompson added that she has worked on developing off-speed pitches that tail away from and into hitters on both sides of the plate.

Amber Maloskey returns to centerfield and is known as a tremendous defensive player for Sherman who has seen improvement at the plate with each passing season.

“To the best of my memory, she played the entire season without an error and was involved in a lot of plays,” he said. “Her arm is very strong and she can deliver the ball from the fence to home plate.”

Chloe Treadway will hold down the shortstop position and will serve as a pitcher for the Lady Tide. When Treadway is on the bump, Elkins will slide over to shortstop.

“Treadway has a great glove and arm,” the coach said.

Hailea Skeens showed power at the plate last season and will spend most of her time at first base. Sophomore Zoey Steele will assume the catching role this season.

“She is a leader on the field and she is one of the players who will call a timeout when needed and will talk to Autumn when she thinks it is warranted,” Henderson said. “Ammie Hughes will also be doing some catching for us.”

Bailey Lafferty is also an infielder competing for playing time. Left field will likely be patrolled by Jada Samuel. “She has good instincts when the ball comes off of the bat,” Henderson added.

Kenzi Rinchich and McKenzie Dickens will see time at an outfield position and will compete for full-time spots.

Henderson added that he stresses to his players that being a returning starter from a year ago doesn’t guarantee a starting nod. Each position must be earned again.

Shaylee Lewis looks to be the front runner to fill a void at third base. Henderson said that the infielder has good fundamentals and will continue to progress quite well with varsity experience.

Henderson said that, overall, team speed is not a strength, but the squad has plenty of upside in multiple areas and one of those is post-season experience and many innings logged in crucial situations.

“These girls have seen a lot and they’ve played together for a long time,” he said. “This isn’t their first rodeo. Our fundamentals are good and we have a positive, winning attitude. We expect to win and that is what we want to promote in the program. Athleticism and instincts are a dangerous combination and fortunately we have both.”

Terri Dawn Williams returns as an assistant coach to Henderson.