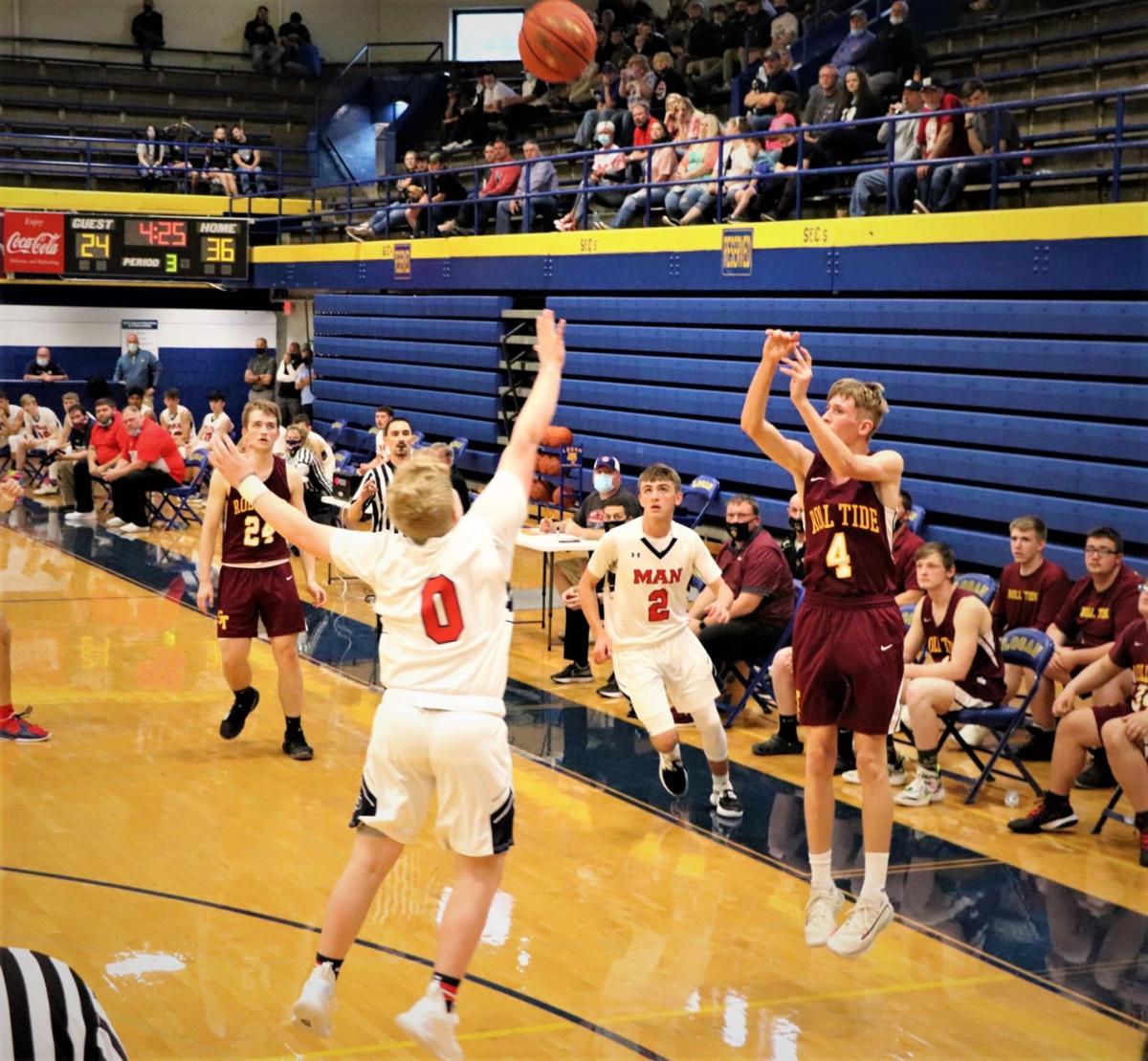 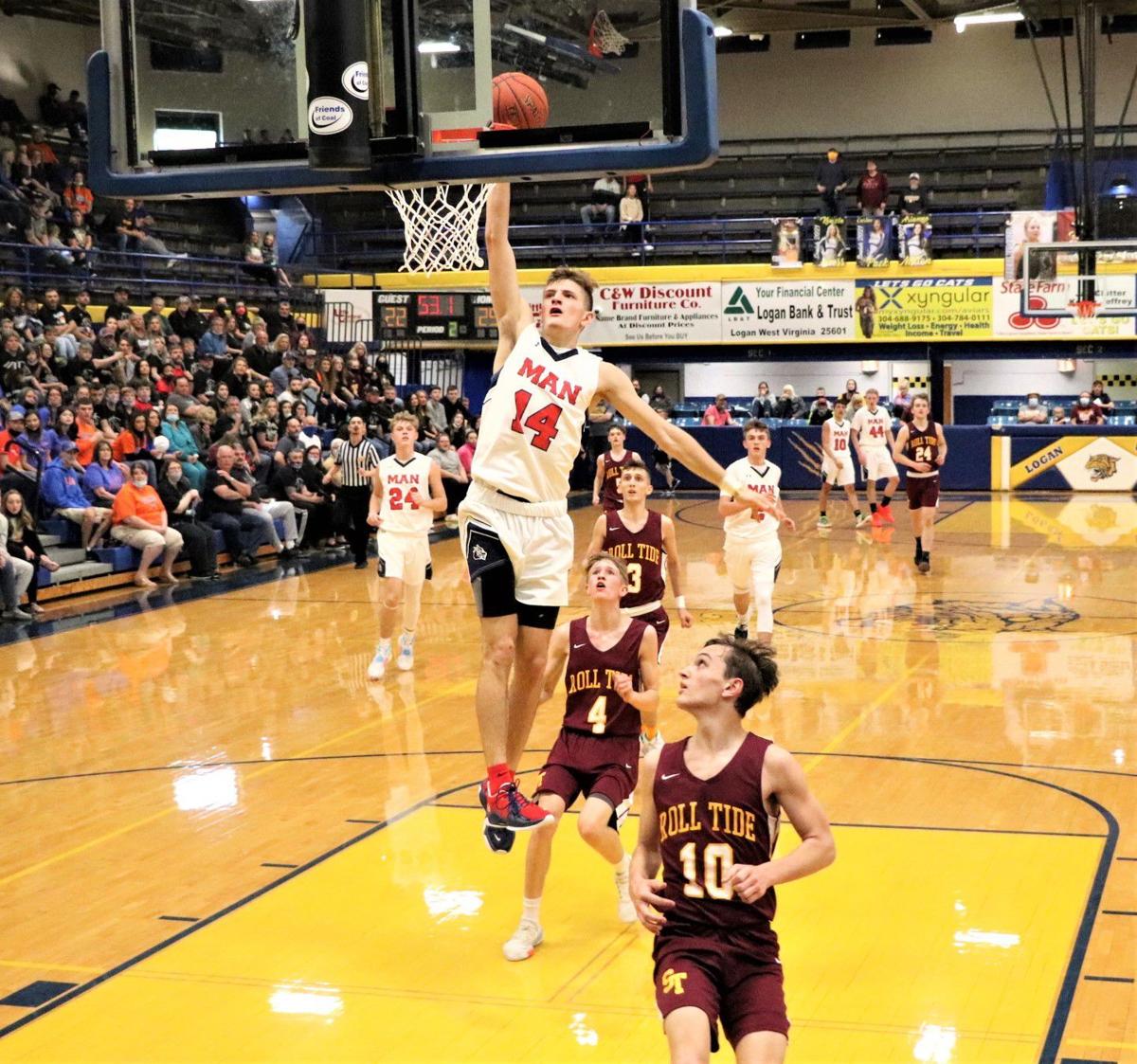 Austin Ball attacks the rim for Man in a sectional win over Sherman on April 19.

Austin Ball attacks the rim for Man in a sectional win over Sherman on April 19.

LOGAN — It wasn’t exactly the way that Man High coach Tommy Blevins drew it up on the chalk board but he’ll take the 66-38 win over Sherman last Monday night at Willie Akers Arena in Logan.

“We came out sluggish early,” Blevins said. “We were not doing a good job of filling the passing lanes defensively in the first half. We weren’t hustling and I was very upset at halftime.”

Sherman (9-6) came out in a Princeton-inspired offensive set — a deliberate offense with multiple passes each possession with the goal of controlling the tempo and often pushing a high-scoring opponent into a lull on both ends of the court.

They employed a triangle-and-two defense to try to slow down the Hillbillies when they had the ball.

Guard Dalton Rollo served as the fulcrum at the top of the key for the effort with the Tide executing constant motion and slashes to the basket.

It worked for a quarter-and-a-half.

“We went into practice before the game and told the boys we were going to try something unconventional,” said Sherman Coach Aaron Pauley. “We wanted to run a minute-and-a-half to two minutes off of the clock per possession. The kids bought in and they did well with it.”

Sherman took the lead at 12-11 at the end of the first frame when guard Dalton Rollo hit a turnaround jumper on the baseline just before the buzzer.

Just two weeks prior in the regular season, the top-ranked Hillbillies disposed of the Tide, 93-50.

“I warned our guys at halftime, this isn’t going to be the same team and they will come out and play stall ball,” Blevins said. “We didn’t work on defending it in practice but we made some adjustments in the second half.”

Man began to flex in the second quarter as Austin Ball scored six back-to-back points to ignite the Hillbillies and they outscored Sherman 18-10 to take a 29-22 advantage into intermission.

Man began taking higher percentage shots in the third and pushing the ball up the floor.

They went on a 21-6 run that saw Caleb Blevins take over the game with 13 points in the frame with an inside-outside game burying a trio of 3-point buckets, a pair of free throws and an athletic reverse layup between two defenders on a fast break.

Sherman got 15 from senior Alex Kirk who proved a nuisance to the Hillbillies defensively as well. When he left the floor for the last time to greet his teammates, coaches and coach Pauley, Coach Blevins left his bench to congratulate Kirk on a fine prep career for the Tide.

With the game out of hand, both teams began substituting in the fourth period as Man saw nine players in the scoring column with Caleb Blevins leading the way with 20 and Austin Ball added 10. Sherman was led by Kirk’s 15 and A.J. Skeens with 10.

“I’m proud of our guys,” Pauley added. “They came out and took a shot at a really good Man ball team. It wasn’t the end result we wanted but I can’t fault the effort of our boys.”