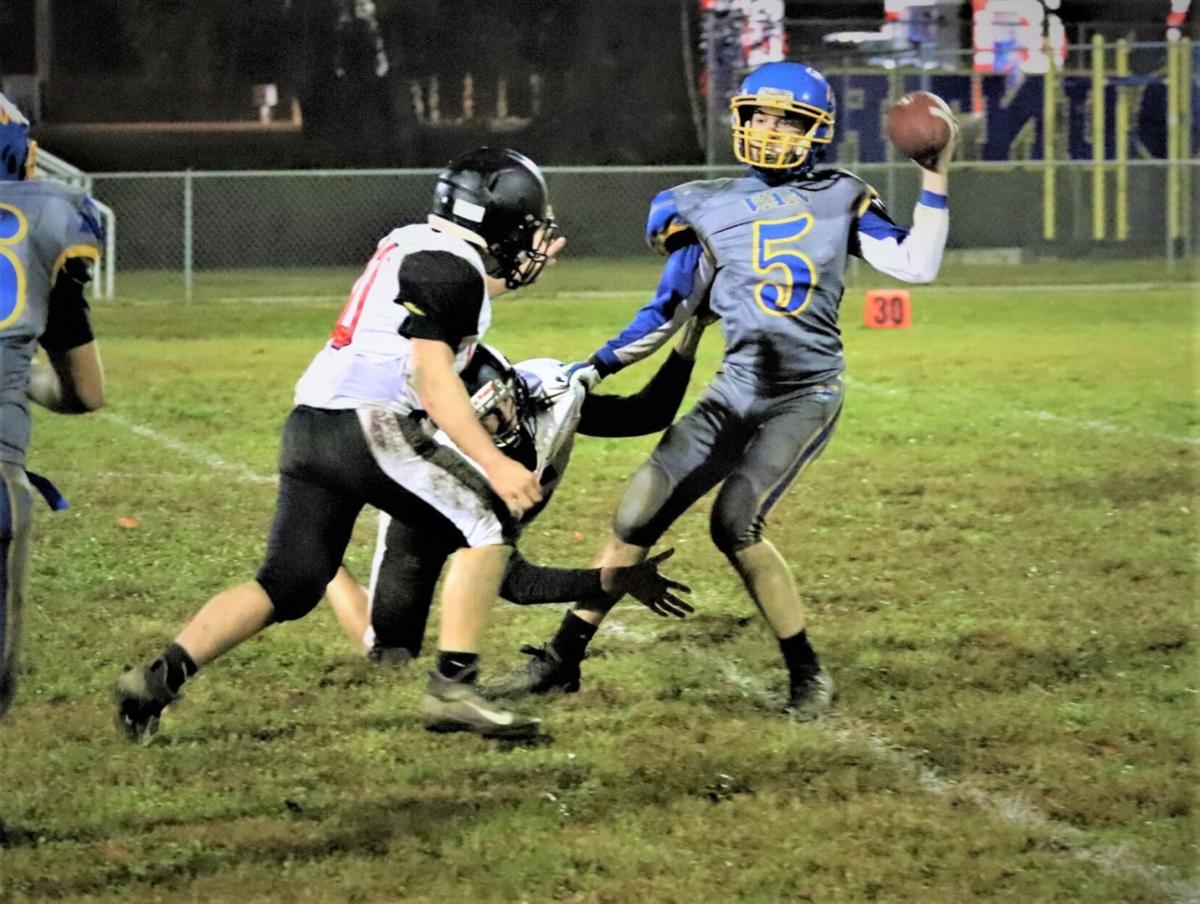 Van High’s Shaun Booth (5) looks to complete a pass under pressure versus Pikeview on Nov. 4 at Herschel Jarrell Field at Van. 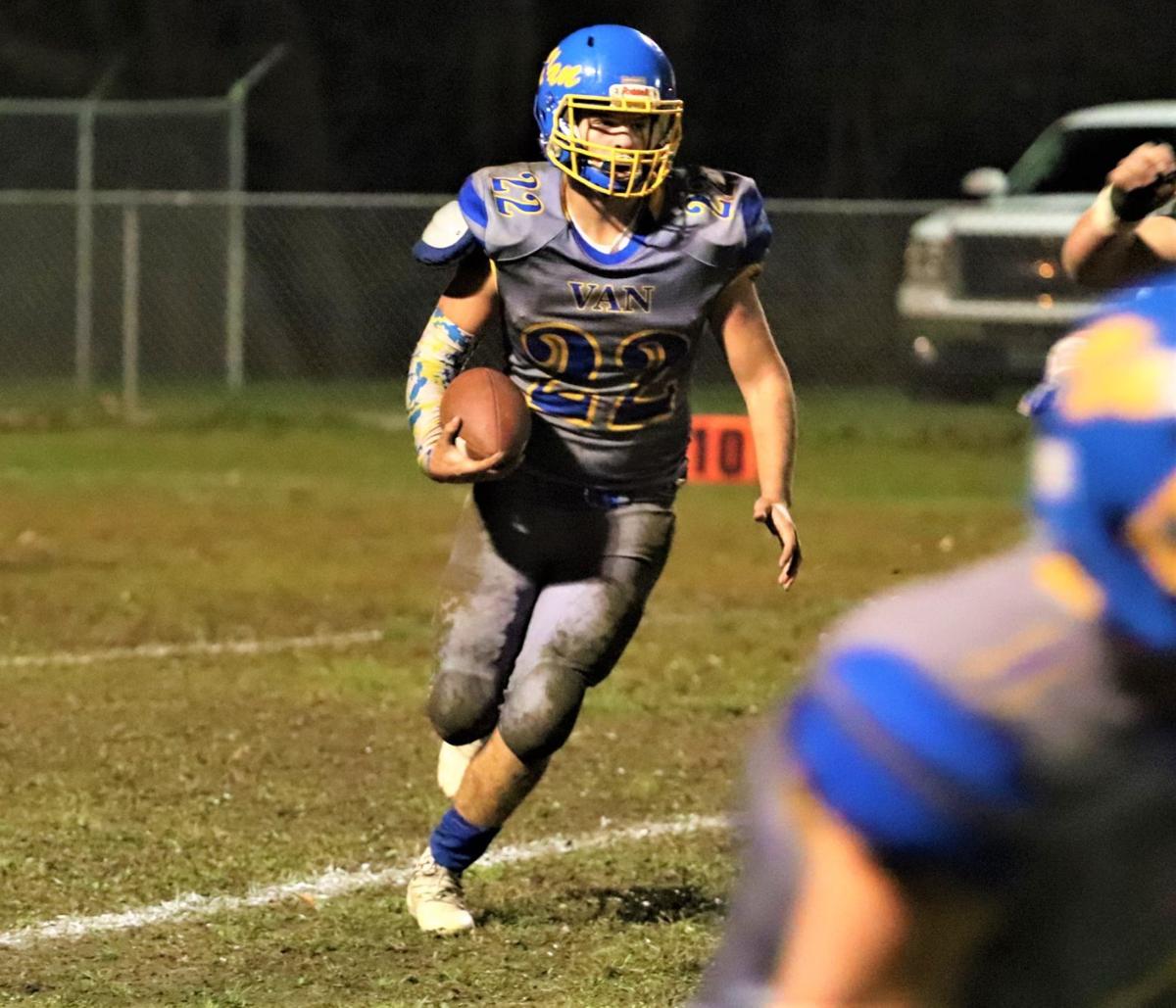 Van High’s Shaun Booth (5) looks to complete a pass under pressure versus Pikeview on Nov. 4 at Herschel Jarrell Field at Van.

VAN — Van High struggled to negate the potent passing game of Pikeview, and the Panthers held on for a 40-31 win at Herschel Jarrell Field on Nov. 4.

The Bulldogs played without running back Byron Stewart who was out with a knee injury, and a pair of other starters who were benched for missing a Bulldog practice, according to their coach.

“It has been the story of our season,” said Van Coach Mark Agosti. “We come out and play a pretty good half of football and implode in the second half.”

Agosti added, “We are young and we have a pair of sophomore corners and this team threw the ball over 40 times tonight and it was a challenge for our entire defense.”

“We put the ball on the ground and lost the field position battle all night,” he said. “It is hard to win that way. We dropped a couple of pretty easy interceptions. We competed and we moved the ball up and down the field. We played well up front and moved the pile but just gave up too much.”

The Panthers got on the board first when Meadows punched the ball in after a short drive from inside the 5-yard line to put his team up 6-0 as the 2-poiint conversion attempt failed.

Van (2-4) quickly pushed the ball down the field on runs by Brady Green of 9, 11 and 7 yards respectively, but the Bulldogs put the ball on the ground at the 17 yard-line on a third down play and the Panthers pounced on it.

Van’s Jacob Reed made a big play for his team when he sacked Meadows on a key fourth down play and Van took over on the 19.

Signal caller Kalen Booth led Van on their most sustained drive of the night, completing a quick pass to the flats to brother Shaun Booth and at times serving as a lead blocker for Green. The effort resulted in Green finishing off the drive with a hard-nosed 27-yard dash to pay dirt. The Booth brothers connected again on a conversion toss and Van led 15-6.

On the following kickoff return, 6-foot-3 standout junior receiver Dylan Blake took the ball at his own 21-yard line and kicked the return to the outside on the away sideline and outran the Bulldogs down the gridiron before being pushed out of bounds at the 2-yard line. Meadows finished the job on the next play with a keeper, but the conversion attempt failed and Van’s lead was cut to 15-12.

Van returned the ball to near midfield and in their first series of plays, Kalen Booth hit Green on a slant pattern that covered 41 yards to the end zone with 43 seconds to go in the half. Green punched in the 2-point conversion and Van looked to take a 23-12 lead into the locker room at halftime, but it wasn’t to be.

After a 31-yard kick return, Meadows struck again, methodically leading his team to the end zone using just 33 seconds to do so as he found Nic Holbert for a 17-yard scoring strike, and Van’s lead was cut to 23-18.

Van would find the end zone just once more in the second half and Meadows launched a pair of TD tosses to seal the game for the boys from Mercer County.

“We’ve got to take better care of the ball and find our way in defending the passing game,” added Coach Agosti. “Our kids always play hard and we’ll learn from this and look to get a win on Friday.”

Van will wrap up their season on Nov. 6 as they host Richwood.