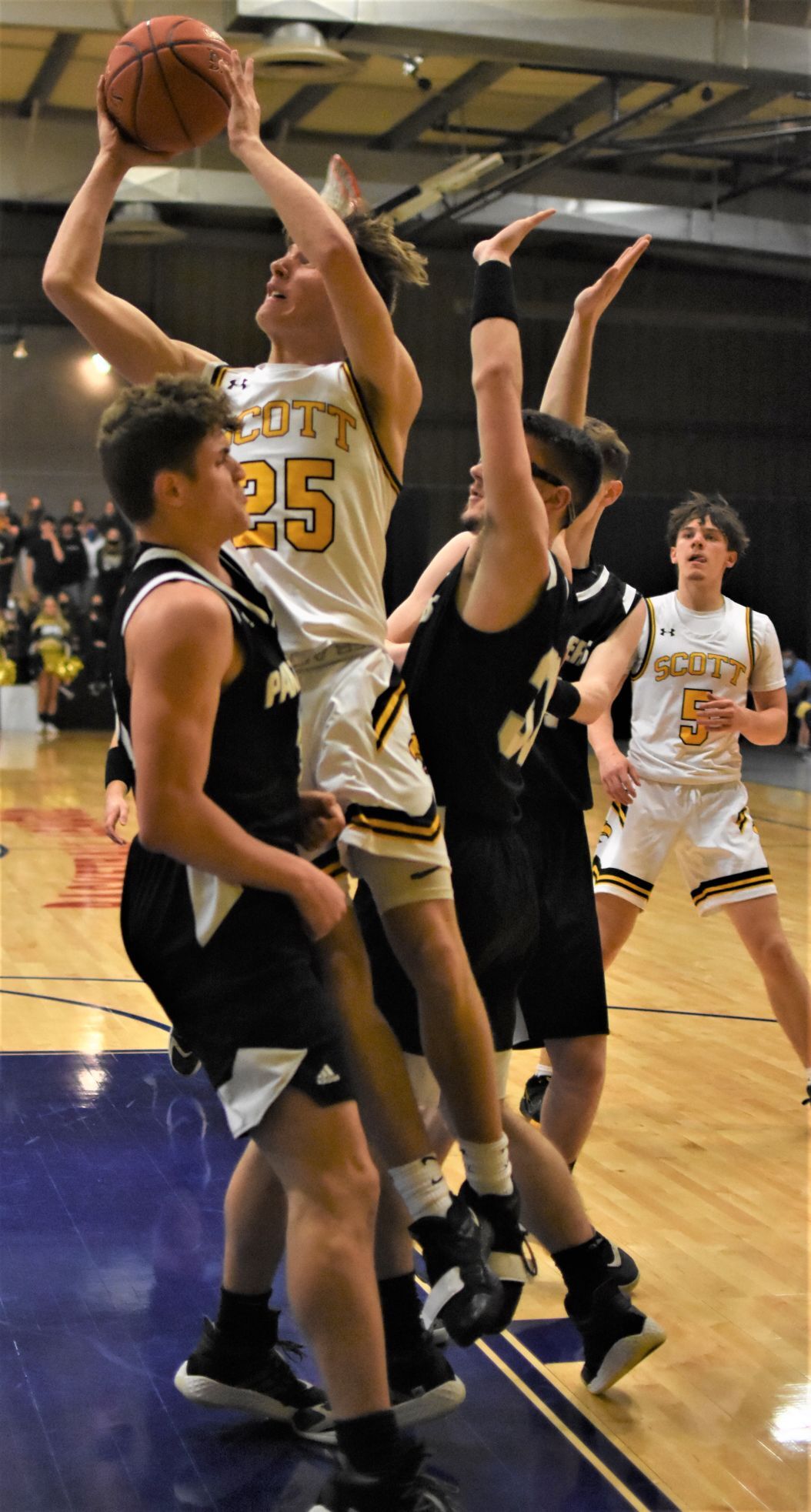 Braxton Dolin drives to the basket for Scott versus Lincoln County on April 21. 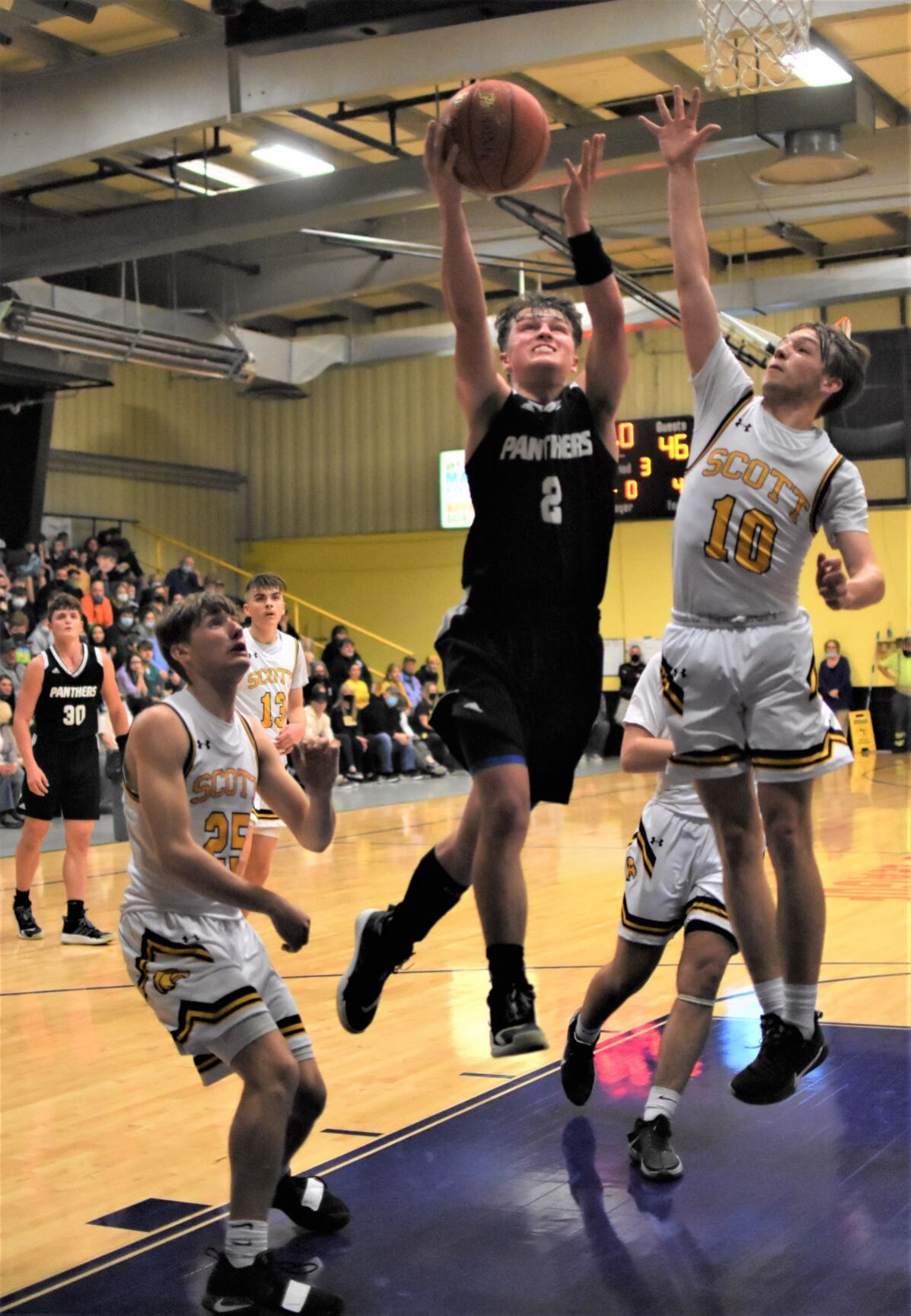 Jayse Tully (2) scores a bucket for Lincoln County versus Scott on April 21. Cavin White (10) defends on the play for Scott.

Braxton Dolin drives to the basket for Scott versus Lincoln County on April 21.

Jayse Tully (2) scores a bucket for Lincoln County versus Scott on April 21. Cavin White (10) defends on the play for Scott.

The backdrop could have been a scene from the classic 1986 basketball film “Hoosiers” as Lincoln County erased an early second quarter 10-point deficit and outscored Scott 36-22 in the middle quarters to down Scott 59-54 in Class AAA Region 4 Section 2 play at the Madison Civic Center.

No. 2 seed Scott (4-10) jumped out to a quick 18-9 lead in the first quarter thanks to the sharp-shooting of Reece Carden, who buried four, 3-point buckets and looked to have the hot hand for the Cardinal Conference Skyhawks early. Carden pulled up with confidence and made his presence felt on the floor.

Lincoln County (13-6) wasn’t going away without a fight.

Coach Rodney Plumley’s squad dug in on the capable shoulders of 6-foot-6 wingman John Blankenship, who was nothing short of stellar in the second frame.

Blankenship missed two early put-ins near the basket early in the game, but came back with a fire on both ends of the floor — including three blocked shots on the defensive end.

In the second, he took over the game long enough for Lincoln County to find firm footing and erase the Skyhawk lead. He poured in 10 points in that decisive quarter — including a rainbow-inducing 3-point shot from the corner, showing he can be more than a post-presence for the University of Charleston in the fall.

“John was fantastic,” Plumley said seconds after the final buzzer. “These kids have worked so hard and they showed their character tonight. They showed that they can overcome and play so well as a team. I couldn’t be more proud of these guys right now.”

The Panthers held a slim 30-27 advantage at intermission, thanks to a floater in the lane from Isaiah Koontz with barely a minute to go in the half.

The third period saw Lincoln County exercise more of an initiative they employed in the second frame — putting bodies in passing lanes when the Hawks were in their half-court set.

“That was a key for us,” Plumley said. “Ball pressure and finally our shots started falling. We were getting good looks but just couldn’t get them to fall.”

The Panthers held Scott to 13 in the third frame even with Carden striking for another trey and putting in seven more points. Blankenship, Scooter Phillips and Will Carpenter netted six points each in the third with Carpenter proving a nuisance and a thief on the defensive end — picking up loose balls and a pair of steals in the third frame where he showed why he is considered the team’s best defender by his coach.

Down by 10 entering the final quarter, Scott leaned on Jaren Gaiter — a guard with a penchant for big shots in crucial moments.

Gaiter buried three 3-point buckets in the fourth with two coming from the wing and one from the top of the key. They were facilitated by dribble-drives from Landon Stone and Cavin White, who kicked the ball out to a wide-open Gaiter, who was only contested on one of the shots.

Stone got in on the 3-point show and buried one of his own to pull Scott to within a bucket.

Lincoln County guard Jayse Tully showed why he is valuable to his team down the stretch — scoring seven points down the stretch including a trey that served as a dagger to the Skyhawk hopes coming off of a Jackson Sanders steal.

“We rebounded so well tonight and it wasn’t about us making adjustments, it was about reinforcement of the game plan and our kids are going to do that,” concluded Plumley. “The kids were making mistakes they normally don’t make and saying ‘my bad,’ but that won’t get you to Friday. Senior leadership tonight found a way to win.”

No. 1 seeded Logan hosted Lincoln County Friday at 7:30 in the sectional final at Willie Akers Arena.