You are the owner of this article.
Edit Article Add New Article
You have permission to edit this article.
Edit
Welcome, Guest
CVN
News & Features
Sports
Opinion
Obituaries
Classifieds
Legals
e-Edition
Share This
1 of 5 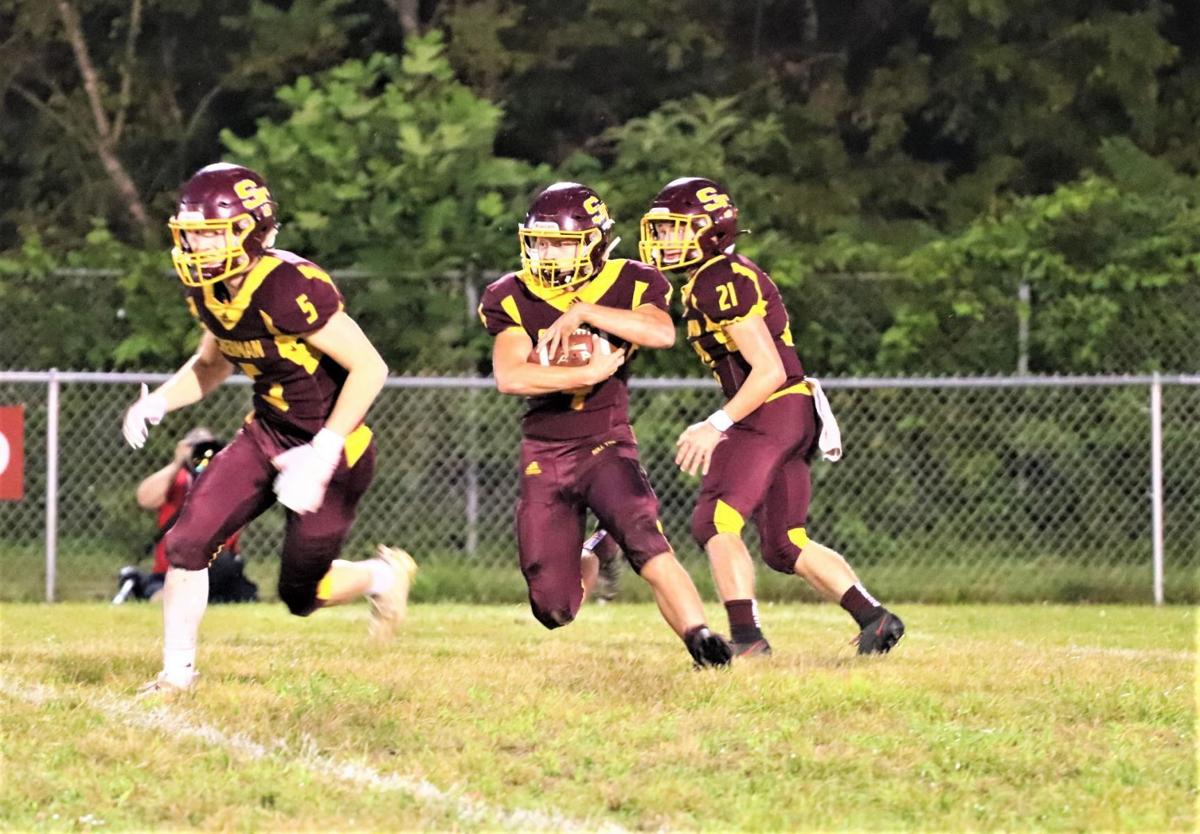 Sherman High’s CJ Winnell takes the handoff from quarterback Davy Jarrell (21), and Colby Buzzard (5) looks for a block versus Scott on Sept. 28. 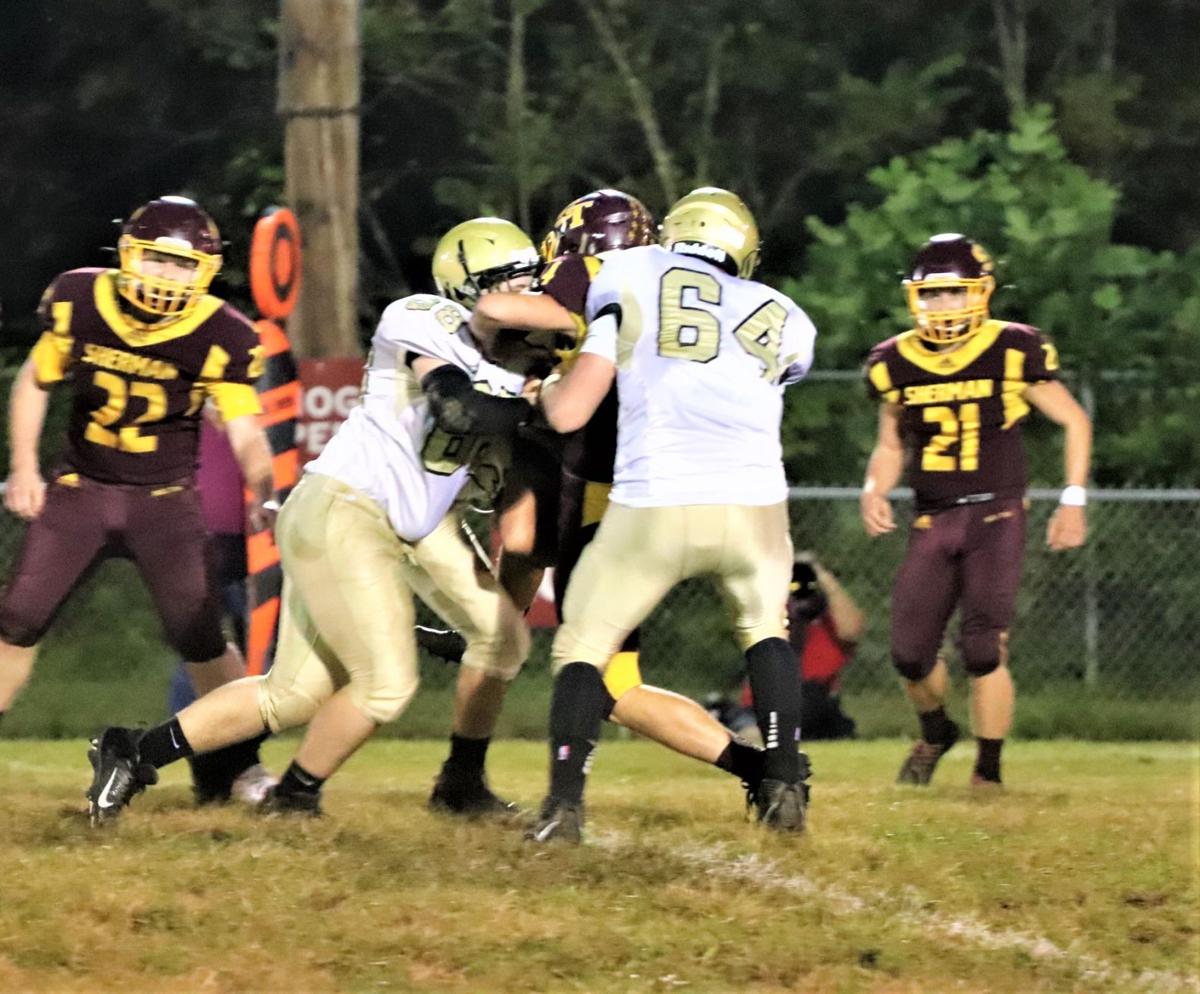 LEFT: Scott’s Cody Nantz (64) and Isaiah Brown take a Sherman ball carrier down in the backfield in their 14-8 loss to Sherman on Sept. 28. 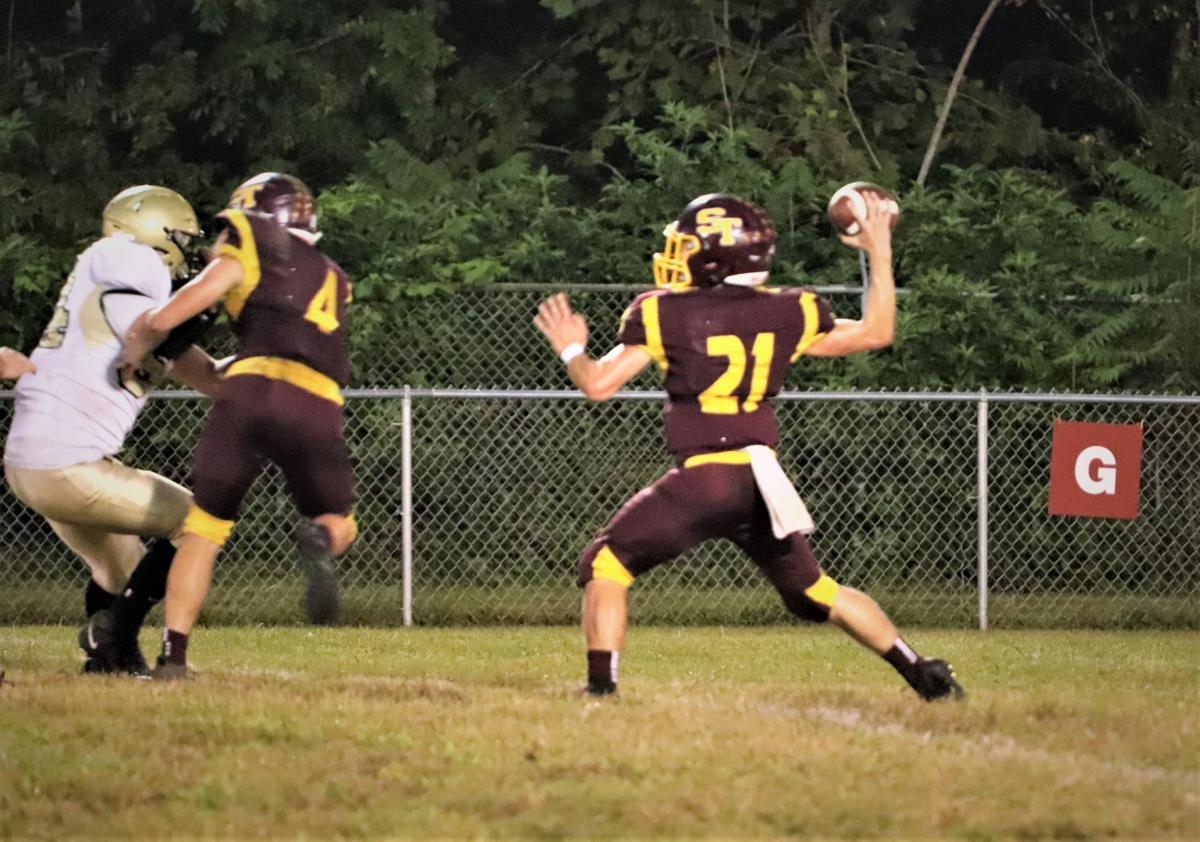 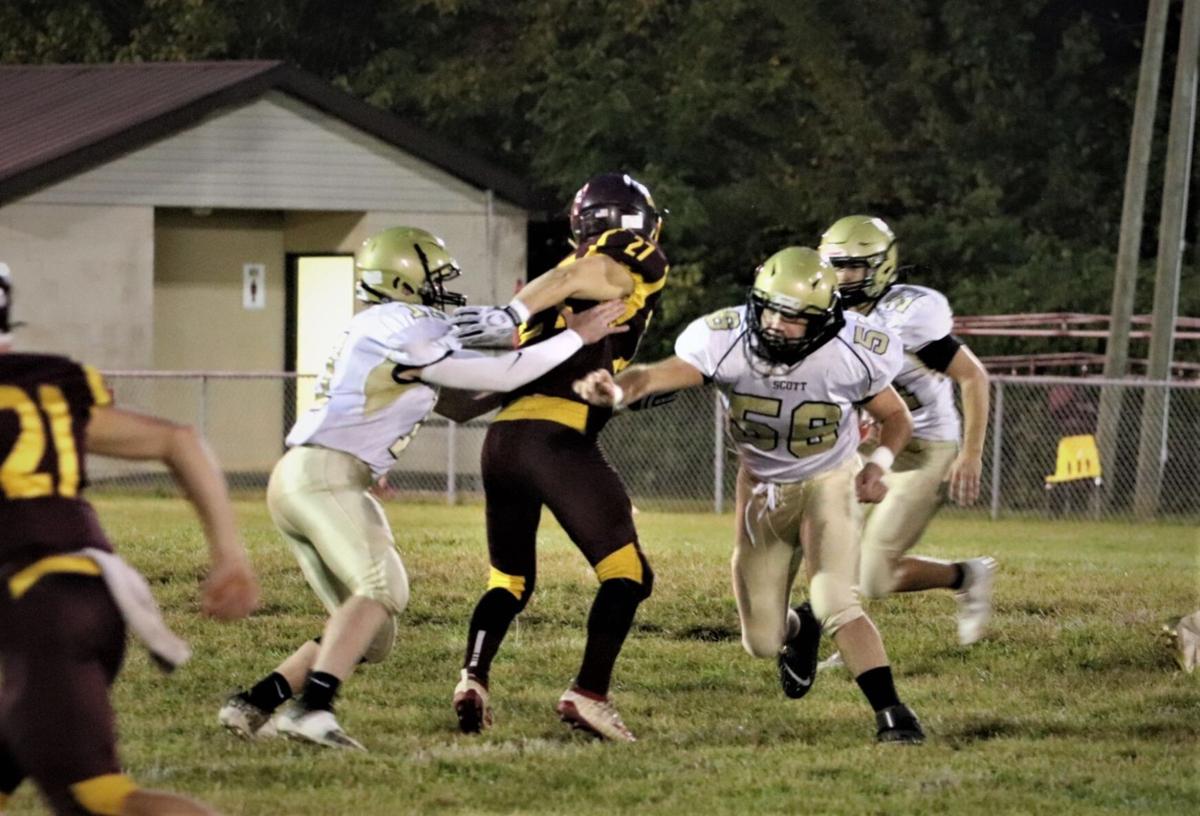 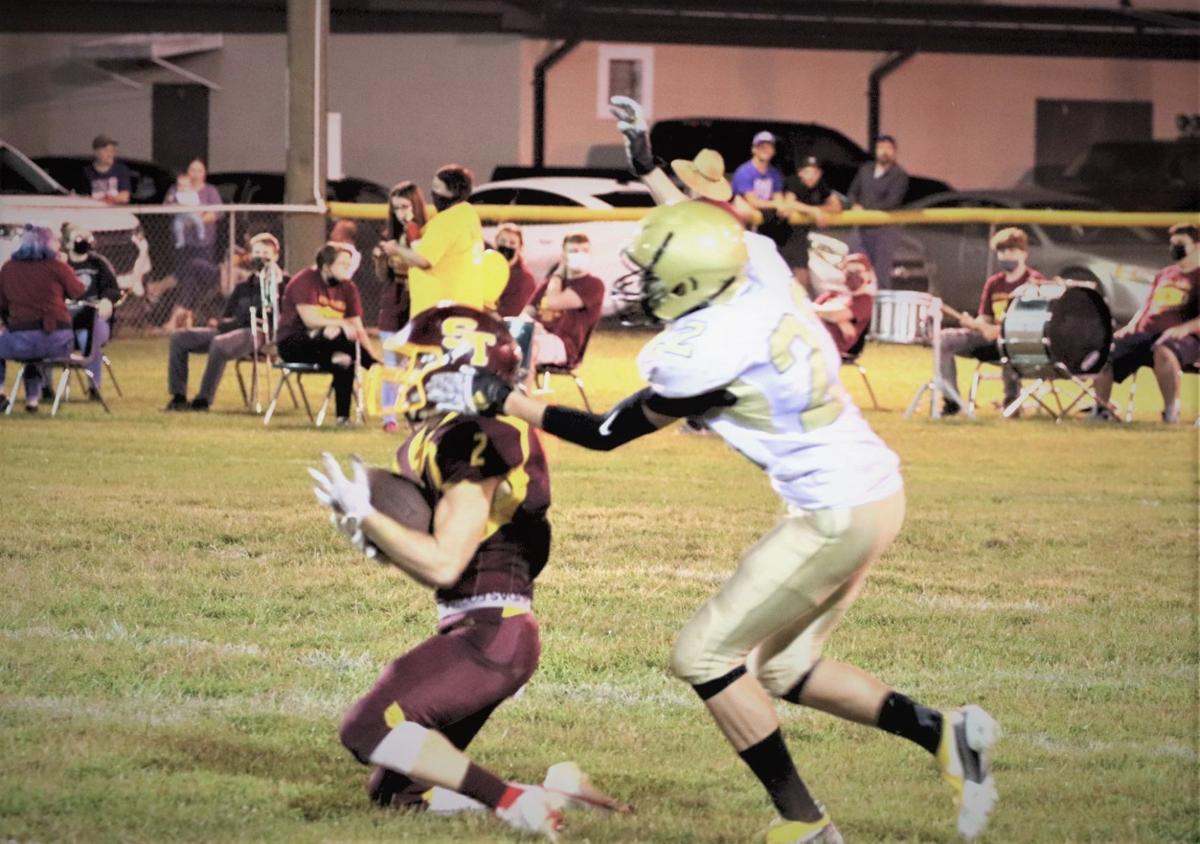 Sherman High’s CJ Winnell takes the handoff from quarterback Davy Jarrell (21), and Colby Buzzard (5) looks for a block versus Scott on Sept. 28.

LEFT: Scott’s Cody Nantz (64) and Isaiah Brown take a Sherman ball carrier down in the backfield in their 14-8 loss to Sherman on Sept. 28.

SETH — Sherman High used a stinging defense and fought off a strong Scott High effort in the fourth quarter to hold on and beat the Skyhawks at Zontini Field, 14-8, on Monday, Sept. 28.

The Class AA Skyhawks (1-2) had the ball near midfield with just seconds to go but could not convert on a fourth-down pass, leaving Class A Sherman (2-1) the victor.

“It’s a great night to be a Tidester for sure,” said Sherman Coach Michael Showalter. “We told the boys this was the 95th chapter of Sherman Tide football and it was up to them to leave their mark and that this was the game they’d talk about 30 years from now. Just go out there and get it. Roll Tide.”

Originally scheduled for Sept. 18, the game was delayed due to requirements set forth for extra-curricular activities in schools via the West Virginia Department of Education COVID-19 re-entry map.

Boone County upgraded to a “yellow” status on the previous Saturday, Sept. 25 — allowing the schools to take the field.

The contest began with the teams trading punches early and punting in their first series, with Sherman’s Hunter Bowling and Carter Dunfee combining on a sack for Sherman and Scott’s Ryan Elkins busting up a Tide running play with an instinctive stop in the backfield.

“We knew they would be the best defensive front we’d face all season,” said Showalter. “It was a challenge and we knew we were in for a fight.”

Scott had an early opportunity on its next drive, but sputtered at the 24 of Sherman with 1:22 left in the first quarter when they could not convert a fourth-and-short. The drive saw runs of 7, 6, 5 and 9 yards from sophomore quarterback Klay Matthews and senior fullback Michael Clay.

Sherman Junior Colby Buzzard broke the game open with a dazzling 57-yard fade pattern on a pass-and-catch from Davy Jarrell — a perfectly lofted throw that hit his target in stride.

After the Jarrell extra point, Sherman led 7-0 with 6:22 to go in the second frame.

“Davy made some really good decisions with the ball tonight,” Showalter said.

Scott Coach Shane Griffith had praise for the Sherman quarterback.

“He (Jarrell) was a difference maker to me,” he said. “He stood in there and made a couple of third-down conversions with some throws down the field.”

On Scott’s very next offensive series, TJ Hager picked off a Skyhawk pass on the 9-yard line with 43 seconds left in the opening half — killing another Skyhawk opportunity.

“We had our chances,” said Griffith. “The delay in playing again was a challenge and we couldn’t build on the success we had in the second half (win) against Madonna. We couldn’t get jumpstarted and Sherman came to play. I give them credit, they were ready for it.”

The Tide led by a touchdown at intermission.

Sherman came out of the locker room inspired in its first series of the second half, and Jarrell once again was a catalyst as he reeled off a 22-yard run on an option play where he tucked the ball in and squirted through a gap into the third level of Scott’s defense.

Jarrell followed that up with a 17-yard toss to running back CJ Winnell, who was brought down inside the red zone.

With 9:53 to go in the third period, Winnell put a lid on the drive when he plowed in for pay dirt on a four-yard dive. Jarrell hit the extra point and the Tide led 14-0.

Defense was the name of the game in the late third and early fourth periods as the front four of both teams made stinging hits in the backfield on ball carriers. Scott’s Jeff McCoy made a thrilling run on a short throw from Matthews, but bobbed and weaved his way into a 13-yard gain for Scott.

Sherman found a seam when Jarrell found Hager on a 26-yard toss, setting up a first down on Scott’s 24 with 3:30 to go in the game.

The Skyhawks made it very clear that they weren’t going to make it easy on the Tide and showed moxie in the final minutes, as Cooper Martin put the team on his back with tough runs into the teeth of the Sherman defense. Martin fought his way in for a score from inside the five and then earned the two-point conversion on a run, making the score 14-8.

With 2:34 left in the game, Scott drove the Tide backward and Sherman had to punt on a fourth-and-long deep in their own territory.

A long roll on a 68-yard punt helped the Tide push Scott inside their own 10 with 90 yards to go for the score they needed.

“The style they play, they run a little bit of option and we see that on our schedule, so it isn’t a foreign thing to us,” Showalter said. “We see the double-tight lineup and they just smash at you. These kids have been through, it thinking we were going to play and didn’t....We stayed focused and my staff prepared well in our game plan.”

Showalter added, “When you coach against someone like Coach (Shane) Griffith, you’ve got to be on top of everything. You have to have your kids prepared in every facet of the game because you know he’ll beat you somewhere and they will play hard.”

Showalter said that at 7-0 at halftime, the game flowed like he expected.

“We couldn’t let the penalties beat us and it was the kind of game we expected,” he said. “It was hard hitting with some big plays that decided the game. I’m proud of our boys for pushing through and finishing.”

Griffith said Sherman is a quality team, regardless of the class in which they play.