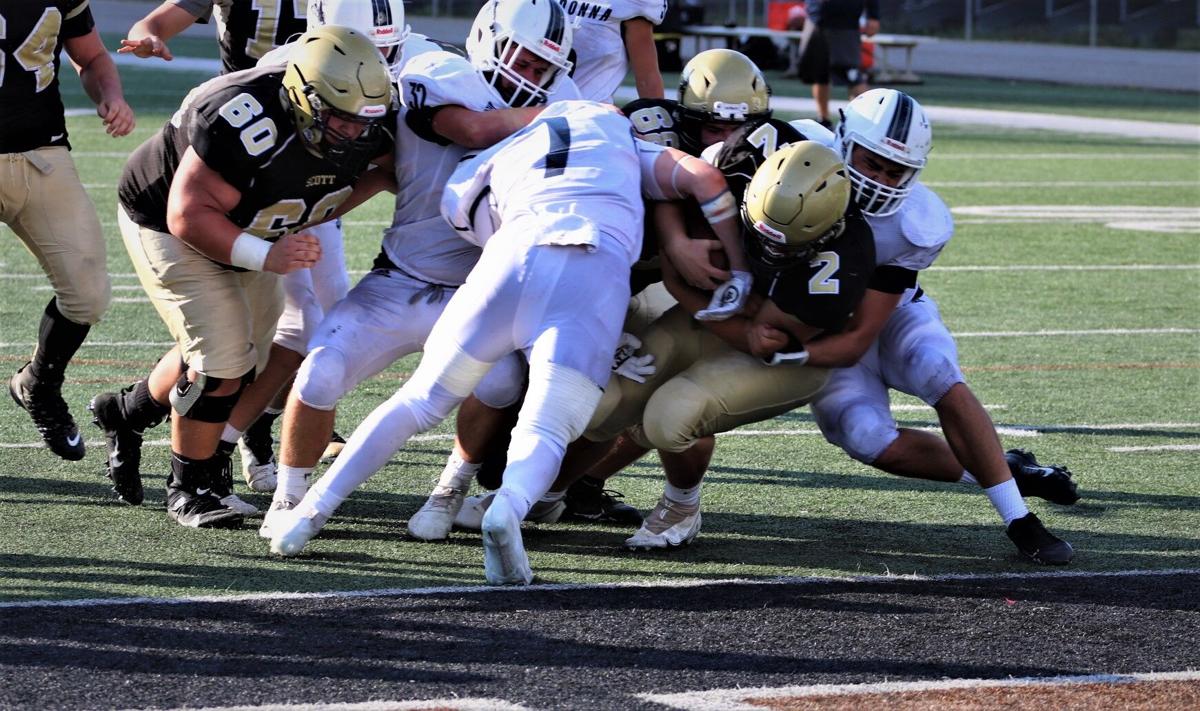 Phil Perry/Coal Valley News Scott Fullback Michael Clay scores for the Skyhawks in a 38-20 win over Madonna on Sept. 12, 2020. 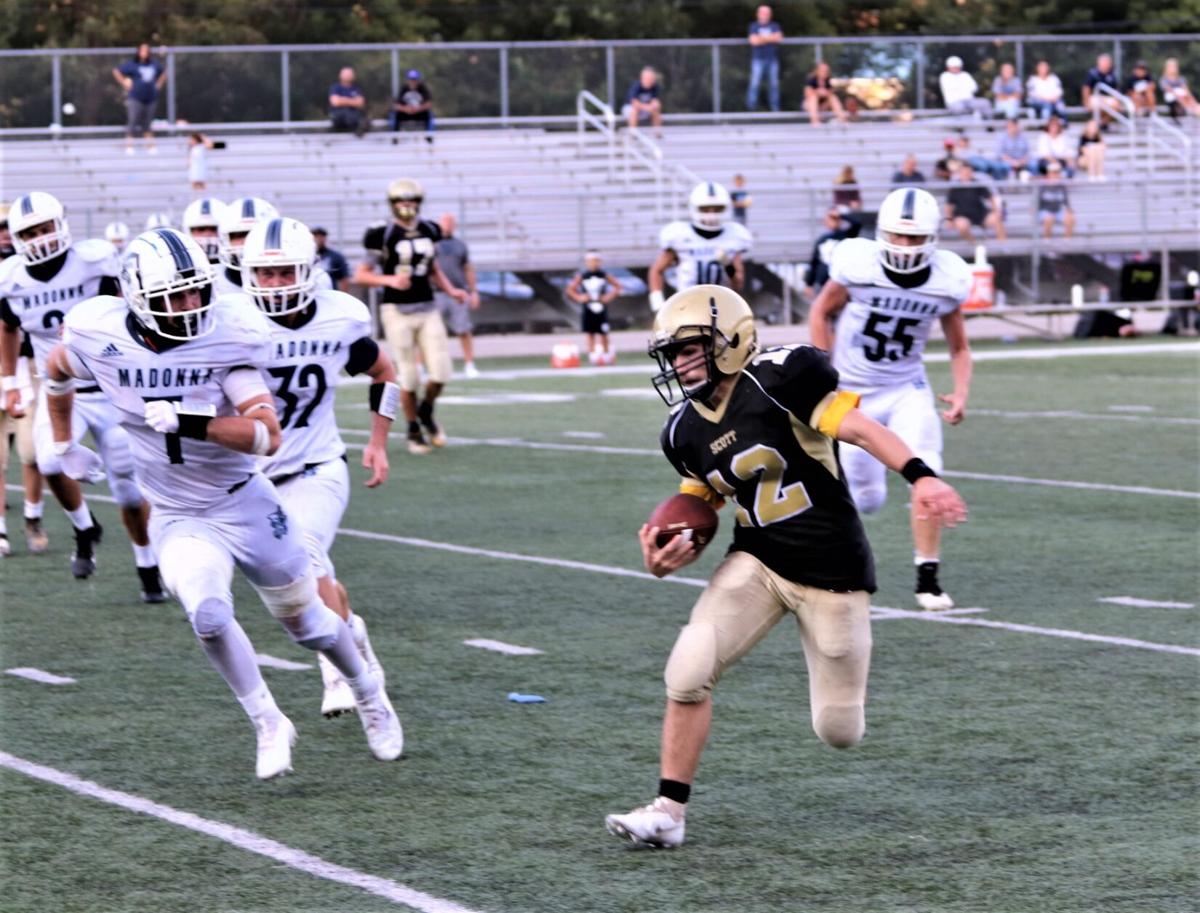 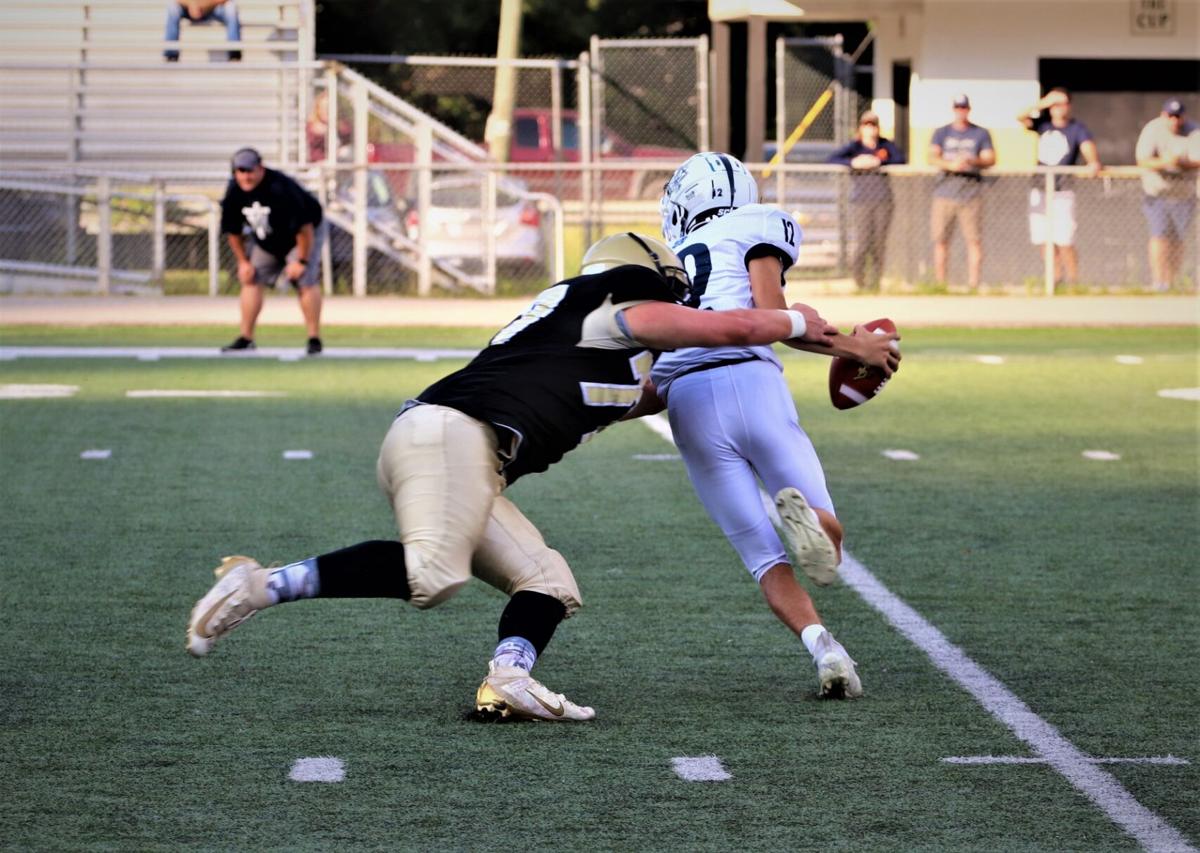 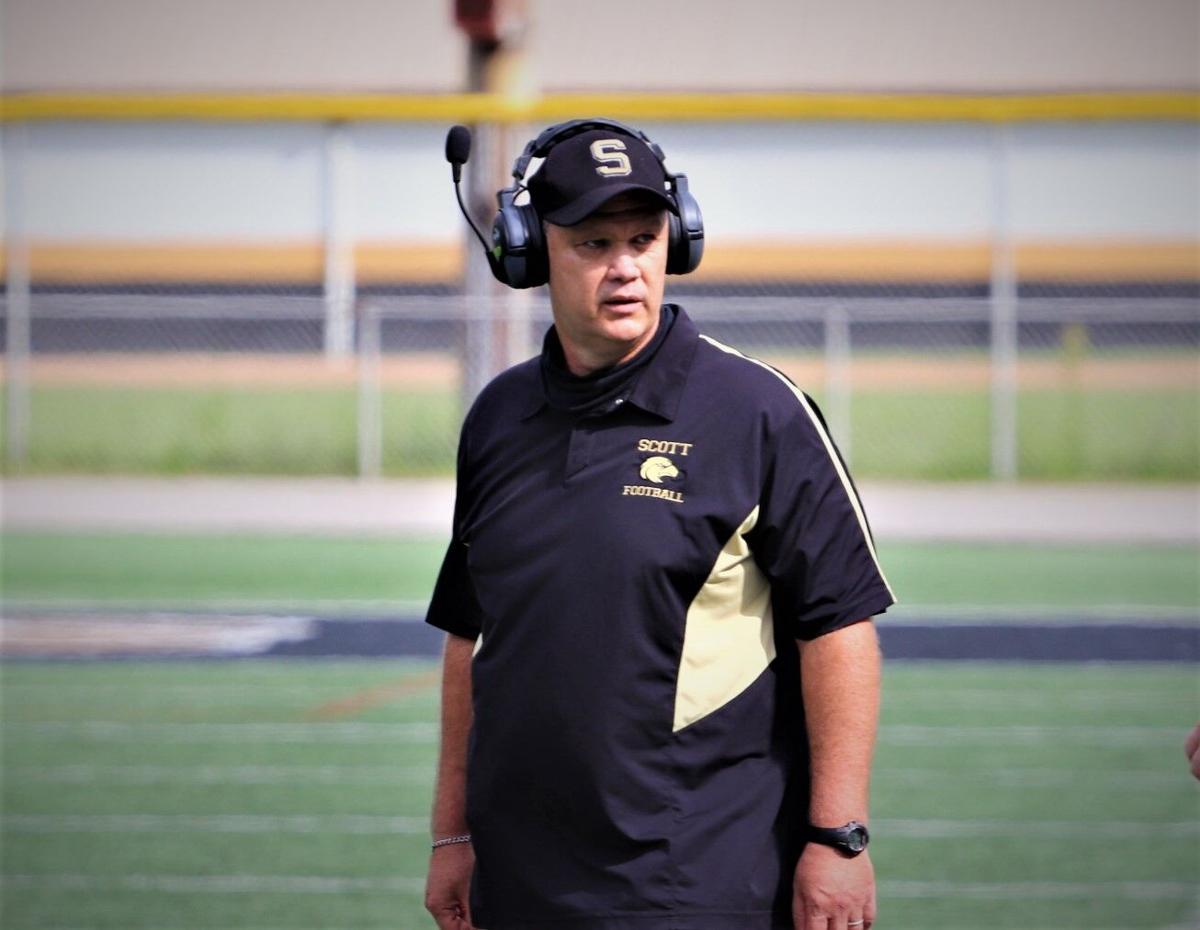 Phil Perry/Coal Valley News Scott Coach Shane Griffith celebrated his 100th win as a Skyhawk with a 38-20 win over Madonna on Sept. 12, 2020.

Phil Perry/Coal Valley News Scott Fullback Michael Clay scores for the Skyhawks in a 38-20 win over Madonna on Sept. 12, 2020.

Phil Perry/Coal Valley News Scott Coach Shane Griffith celebrated his 100th win as a Skyhawk with a 38-20 win over Madonna on Sept. 12, 2020.

WEST MADISON – Scott used a gutsy performance from quarterback Klay Matthews and a defense that bent but wouldn’t break and the Skyhawks (1-1) beat Class A Madonna (1-1) on Sept. 12, 38-20.

Originally slated to play Sissonville on Friday, Scott went to plan B and scheduled a game with the Hancock County team after Kanawha County teams were unable to compete due to COVID-19 numbers.

Senior Jeff McCoy got the game off to a bang when he picked off a pass from Madonna’s Santino Arlia in the first offensive series from the Blue Dons.

Following a Skyhawk punt, Madonna put a short drive together sprinkled with short passes and Arlia connected with running back Anthony Sessi and after a failed conversion attempt, led 6-0.

The Blue Dons quickly threatened again after a Scott turnover but Scott’s Reese Carden killed the drive when he picked off Arlia on the 19-yard line with 2:43 left in the opening quarter.

Matthews led a drive along with fullback Michael Clay and Kyle Matthews but Scott fumbled on the 19 – just inside the red zone with 7 seconds to go in the opening frame.

Arlia led his Madonna squad on a determined drive that was ruined by Scott’s Ridge Flores when picked off a Blue Don pass inside the 20 – giving Scott new life and the Skyhawk defense a much needed breather.

Matthews took Scott’s triple option attack and led the black and gold on an 82-yard drive that was highlighted by an 18-yard scamper by the quarterback good for a score and with the 2-point conversion by Cooper Martin, Scott led 8-6 and would not relinquish the advantage.

“We’re still young,” said Scott coach Shane Griffith. “We have three seniors and very rarely are they on the field at the same time. Klay is a sophomore quarterback running the triple option and reading it at the line. Not a lot of high school quarterbacks can do that and he is going to continue to grow and we saw a lot of growth from last week to this week.“

In a display of aggressive coaching strategy, Scott executed an onside kick that was recovered by Klay Matthews at midfield.

Unfortunately for Scott, they could not take advantage of the opportunity and the Blue Dons began a drive with just 3 minutes left in the first half.

Dane Messer ran down Arlia in the backfield and sacked the signal caller to force a fourth down. Scott made an unsuccessful run for pay dirt that included a crafty pass and catch from freshman Matt Frye to Martin good for 13 yards.

In the third, Scott was energized by a sack from Cody Nantz at midfield and on the next series, Klay Matthews took the snap and ran through the Blue Don defense before kicking the play to the weak side of the defense for a 57-yard score on what appeared to be an RPO (run-pass option) read by the signal caller.

After a Blue Don punt forced by a sack from defensive lineman Ryan Elkins, Scott took the ball at midfield and drove it with ease to a first-and-goal situation inside the 5. Elkins and his line-mates harassed the Blue Don backfield for most of the game.

“I felt that all season our defensive line would be really good,” Griffith said. “Just players that can make plays and cause disruption.”

Fullback Michael Clay took the handoff and plowed his way into the endzone carrying the pile on his back with a second and third effort. With a strong surge from Martin, Scott got the conversion attempt and was pulling away, 24-6.

Madonna wasn’t going away easy and the squad fired back when Arlia hit Michael Burdine for a 4-yard TD and then found Carleton Littleton for the conversion to make the score 30-14.

Class AA Scott tacked on another Klay Matthews score and thanks to a crowd-pleasing 71-yard scamper from Clay in the fourth, Kyle Matthews found the endzone late before Madonna answered with a strike from Arlia to Sessi to make the final score, 38-20.

The win marked the 100th as a Skyhawk coach for Griffith, who returned for his second tenure behind the Skyhawk headset in 2019. Griffith – the school’s all-time winningest gridiron coach was presented the game ball from the coaching staff and players after the game.

“Madonna has a good football team,” said Griffith after the game. “We got together and made the matchup happen. We found our groove and the option game took over.”

Scott was scheduled to play Sherman on Sept. 18 at Seth for a renewal of the rivalry in a cross-county collision but with Boone County moving into “orange” status via daily reported COVID-19 numbers, Boone County schools will only be able to hold limited practices and no competition.

The CVN will report the status of that game and if it is rescheduled when that information becomes available. Official game stats were not available on Saturday night.