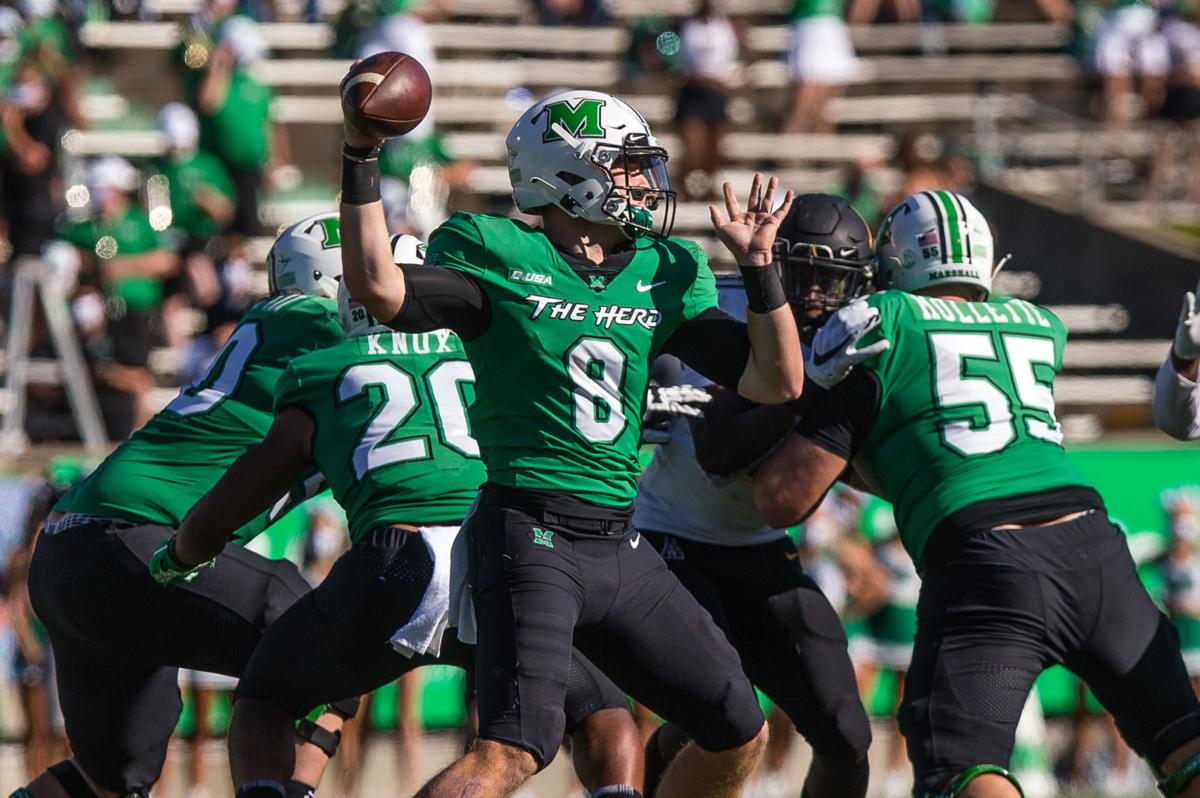 Marshall quarterback Grant Wells (8) makes a throw as the Herd takes on Appalachian State during an NCAA football game on Sept. 19 at Joan C. Edwards Stadium in Huntington, W.Va. 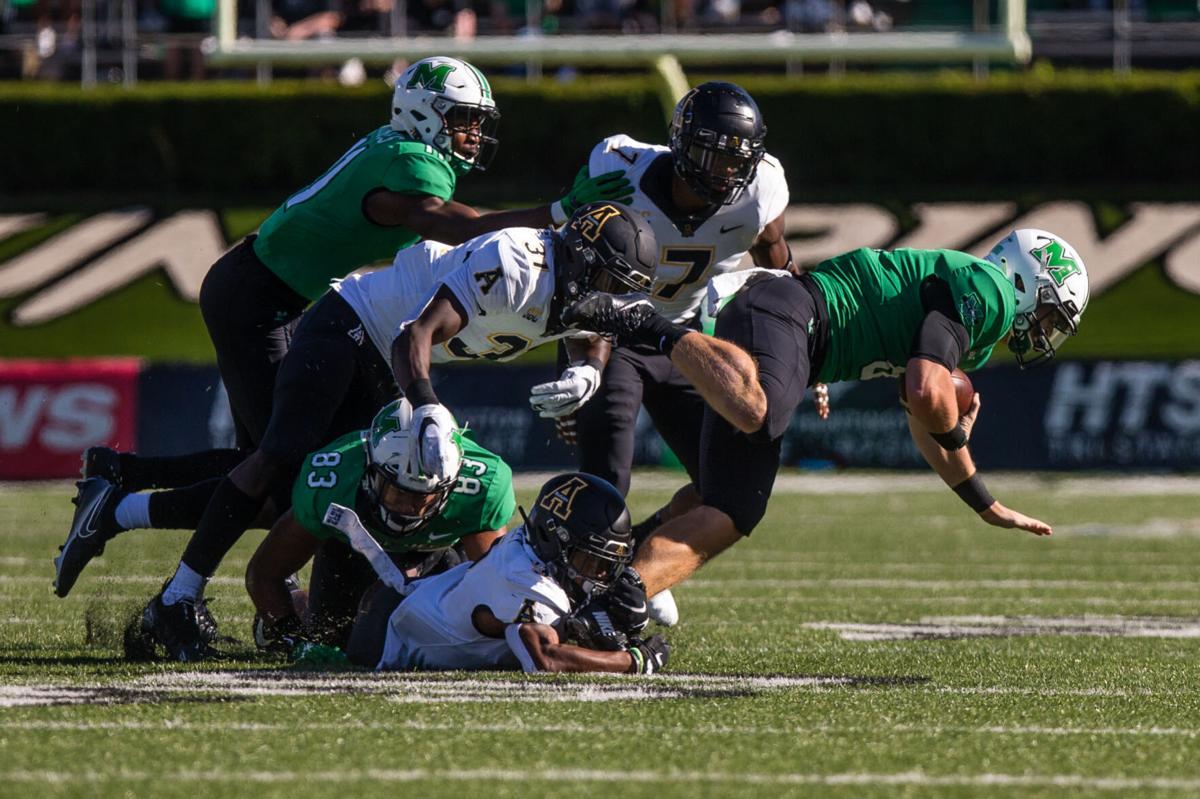 Marshall quarterback Grant Wells (8) dives forward on a keeper as the Herd takes on Appalachian State during an NCAA football game on Sept. 19 at Joan C. Edwards Stadium in Huntington, W.Va.

Marshall quarterback Grant Wells (8) makes a throw as the Herd takes on Appalachian State during an NCAA football game on Sept. 19 at Joan C. Edwards Stadium in Huntington, W.Va.

Marshall quarterback Grant Wells (8) dives forward on a keeper as the Herd takes on Appalachian State during an NCAA football game on Sept. 19 at Joan C. Edwards Stadium in Huntington, W.Va.

Grant Wells’ second start as Marshall University’s quarterback wasn’t the same as his revelatory inaugural start. After throwing for 307 yards and four touchdowns against Eastern Kentucky, the George Washington High graduate came back to earth, throwing for 163 yards, no touchdowns and an interception against Appalachian State.

The most important statistic, though, came in the win column. Marshall knocked off then-No. 23 Appalachian State 16-7 and Wells can now boast a win against a ranked team under his belt and say he’s the signal-caller of a nationally ranked program.

Not bad for a redshirt freshman making his second start.

Yet if there is one thing the Thundering Herd has grown accustomed during Doc Holliday’s tenure as head coach, it is playing — and winning — with freshman quarterbacks.

Rakeem Cato led MU to a Beef ‘O’ Brady’s Bowl win over Florida International as a freshman, the first step to becoming Marshall’s career leader in several passing categories. After Cato graduated in 2014, Chase Litton became Marshall’s starter as a freshman and helped the Herd to a 10-win season and a St. Petersburg Bowl win over Connecticut.

Then, in 2018, Isaiah Green was Marshall’s quarterback and that season’s Conference USA Co-Freshman of the Year for a Herd team that won eight games and the Gasparilla Bowl.

Yet Holliday said this week that, as familiar as this situation is for the Herd, Wells’ experience is a little different, and that has to do with the team around ihm.

“I think the biggest difference in Grant right now is who he’s surrounded with,” Holliday said. “We’ve surrounded him with an offensive line that has played who knows how many starts. Those guys are all guys who have been three- and four-year starters. The comfort zone he has with that offensive line has been tremendous. He knows that offensive line is going to take care of him and protect him.”

Marshall has four offensive linemen with at least 24 career starts for the Herd — Tarik Adams, Will Ulmer, Alex Mollette and Cain Madden. And while Josh Ball has just three starts for Marshall, you can add nine starts to his resume from his time at Florida State.

Against the Mountaineers, that offensive line kept App State’s defense away from Wells. He didn’t take a single sack in the game.

Wells’ comfort zone isn’t limited just to the linemen in front of him. He has plenty of help from the skill positions, including the running back considered the best player in the conference.

“Then you throw a [Brenden] Knox in there who was the MVP of the league at running back,” Holliday said. “You’ve got that part and you’ve got Sheldon [Evans] being the great leader he is. You’ve got guys at tight end who have played a lot of football. You’ve got receivers who are young, but they’re starting to grow up.

“I think we’ve surrounded Grant with players he has confidence in and they have confidence in him,” Holliday added. “I think that helps him.”

Knox — the C-USA MVP in 2019 and Preseason MVP in 2020 — ran for 138 yards against the Mountaineers. Tight end Xavier Gaines continued to be a game-changer for the Herd with two catches for 68 yards and Wells’ roommate Broc Thompson once again was a big of security. He led Marshall again in receptions, this time catching three passes for 37 yards.

Holliday said the support Wells receives from his teammates continues on the sideline. He brought up Wells’ interception against ASU. It came late in the first quarter and ended a drive that reached the Mountaineer 33.

Rather than stew over it, Holliday said Wells had teammates with the experience to help him brush it off and not let it affect him for the rest of the game.

“When you come to the sideline and you’ve got that offensive line that’s going to come over and grab him and say, ‘hey, we’re fine, don’t worry about it.’ I think that’s the biggest difference this year than what the freshmen have had in the past,” Holliday said. “He’s surrounded by a lot of guys who have played a lot of football and are providing him with great leadership.”