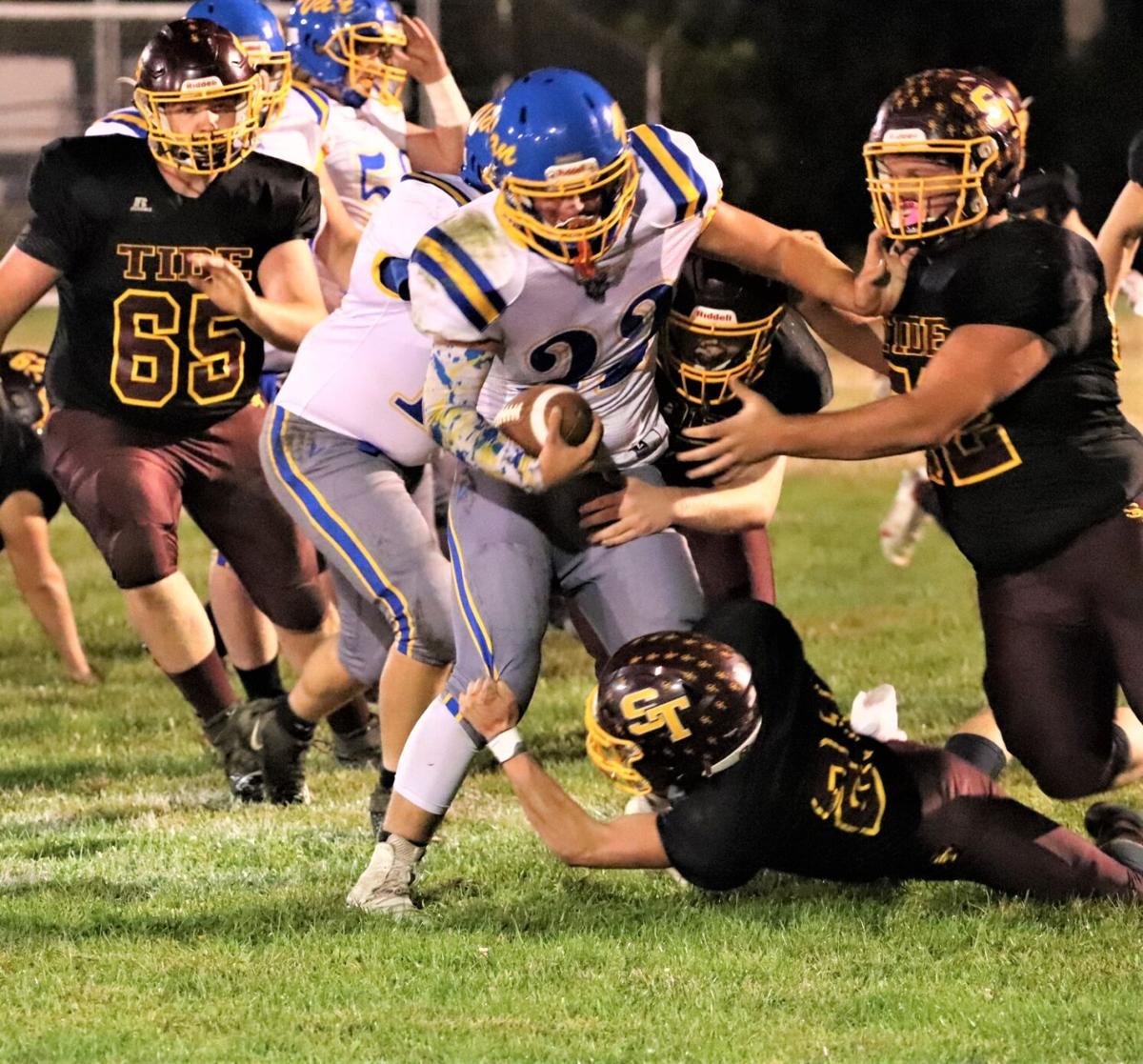 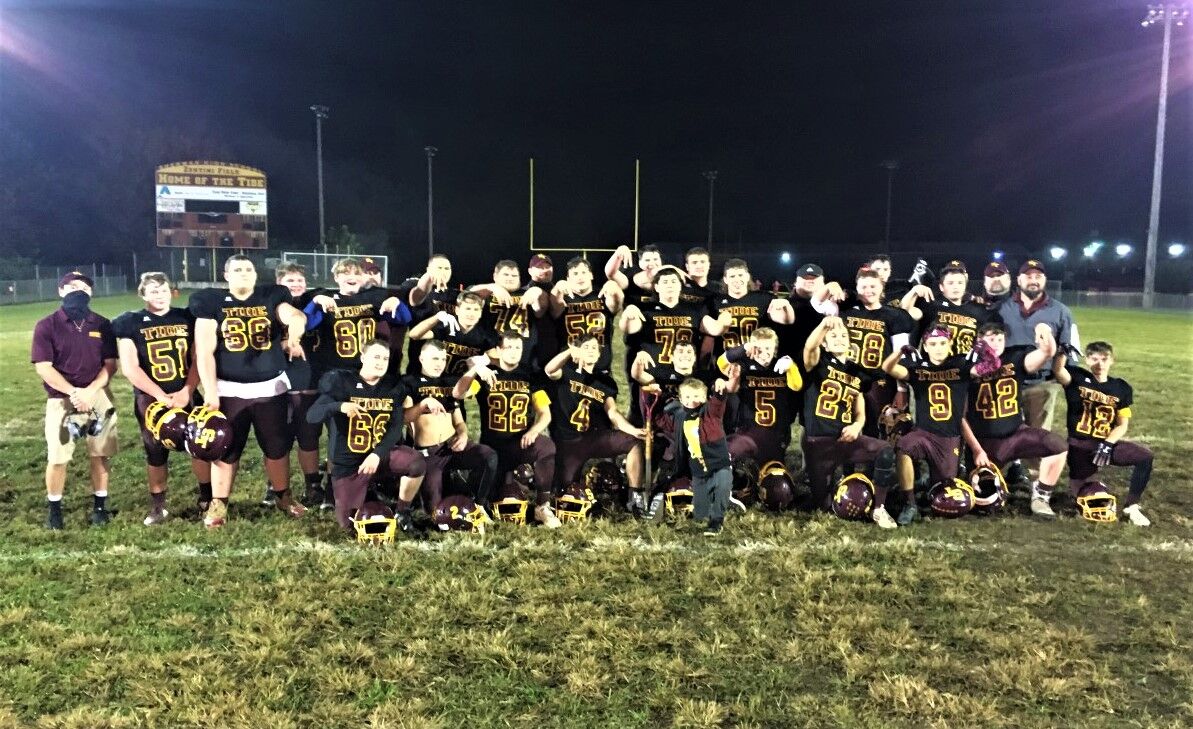 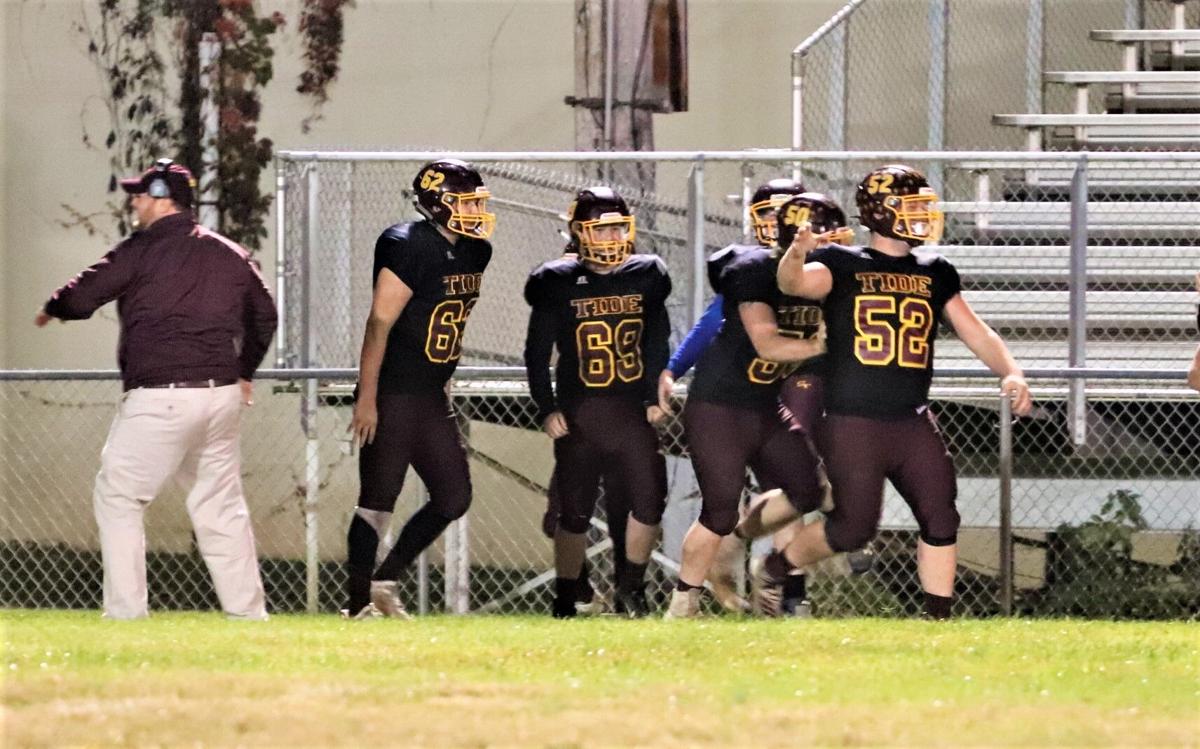 Hunter Bowling celebrates a touchdown he scored off of a blocked punt by Daniel Green in Sherman's 48-0 win over Van on Oct. 16, 2020.

Hunter Bowling celebrates a touchdown he scored off of a blocked punt by Daniel Green in Sherman's 48-0 win over Van on Oct. 16, 2020.

SETH – A gnashing defensive effort and a series of big downfield offensive plays led Sherman High to a 48-0 thrashing of Van High in the “Showdown for the Shovel” rivalry football game at Zontini Field on Oct. 16.

The Tide (3-2) exploded for 35 second half points to seal what was a strong first half effort that helped retain the coal shovel for their trophy case that represents a long, storied history between the two Boone County schools that sees Sherman leading all-time, 44-17.

The series began in 1931 but the Class A schools have not played every year, particularly when Sherman was in Class AA.

Sherman’s Colby Buzzard was cleared to play at 5 p.m. on Friday and made his presence known with limited snaps after suffering a fractured wrist earlier this season. Van was without the services of running back Byron Stewart (knee).

“It didn’t really hit me until the end of the third quarter and I looked up and it was 34-0,” said Sherman Coach Michael Showalter. “Van kept hitting and they kept fighting. Our kids just didn’t want to be the team to give up the shovel. We thought we could move the football coming in and it was that drive that put us up by three scores that was a 4 or 5-minute drive that helped set the tone.”

Van (2-2) looked like they were going to strike pay dirt first in the game with a very deliberate, hard-nosed drive that put the Sherman defense on its heels. The Bulldogs chewed up chunks of yards on a 55-yard effort that saw runs of 4, 3, 6 and 9 with Kalen Booth taking a direct snap and feeding the ball to Brady Green and Shaun Booth.

On a fourth and goal, the Tide stood their ground and turned back the Bulldog offense and took over on downs with 6:45 to go in the opening frame.

“We’ve done a good job most of the year with swarming to the football and employing a bend but don’t break mentality,” Showalter said.

TJ Hager was Sherman’s secret weapon on this night. He quietly made big play after big play for the Tide offense including a 39-yard catch from quarterback Davy Jarrell that was rolled back due to a holding call.

On the very next play in the series, Jarrell stood strong in the pocket and delivered a 40-yard strike to running back CJ Winnell who slipped passed the second level of the Bulldog defense and was brought down at the 25 with 1:30 to go in the first quarter.

“It was really nice to have a full week of prep and practice because (due to COVID-19) we haven’t had that in quite a while,” Showalter added. “I think our kids responded to that. And were prepared tonight.”

Jarrell drove into the end zone on a 1-yard sneak and Sherman led 7-0 after he booted the extra point with just seconds gone in the second frame.

With 8:21 to go, Van had the ball on their own 24 yard-line and on a fourth and long were set up in a punt formation. Sherman’s Daniel Green pinched in from the outside and blocked the punt and Hunter Bowling alertly scooped it up and ran it in for a Sherman score, electrifying a limited crowd at Zontini Field.

“That play was a turning point and opened things up and loosened us up,” said Coach Showalter. “Our kids fed off of that play.”

Sherman led 13-0 after the bulldogs blocked the extra point which carried the teams to intermission.

In the third frame, a 26-yard pass play from Jarrell to Hager set up an 11-yard jaunt from Winnell and on the next play from Scrimmage, Jarrell plowed in from two yard out. The Tide could not complete a 2-point conversion attempt and led, 19-0.

Van turned the ball over on downs at mid-field and Sherman took over and methodically and quickly scored when Winnell took the ball into the heart of the Van defense and kicked it outside to score on a 29-yard run. Jarrell hit the extra point to make it 26-0 with 4:13 to go in the third.

After Jarrell intercepted a Van pass, Hager completed a nifty 24-yard dash that saw him go out of bounds at the goal line for the Tide.

Carter Dunfee plowed into the end zone for the score and Alex Kirk made a nice catch on a flare from Jarrell to complete the 2-point conversion.

Coach Mark Agosti’s Bulldogs put a drive together that stalled on the 40 of Sherman that was led by strong runs from Green including a tough 9-yard gain.

Soon after, Winnell who is a junior, showed why he’s one of the better players in the county when he went 50 yards, ducking and weaving his way 50 yards down the sideline for a score with just over four minutes to go. After Jarell hit the extra point, Sherman led 40-0.

The final dagger was a recovered fumble by Sherman sophomore Dakota Clendenin that he aggressively took 63 yards for a score capped by a 2-point conversion to Green.

“They knew how important this was and Assistant Coach (Will) Hensley talked to the guys and he was a senior in 2017 and it was the first year we’d beaten Van in five years,” concluded Showlater. “He told the kids it was a big deal for him and the other seniors and that they (2020 team) are trusted with the shovel and they have to hold onto it. I think that really got to our guys and they felt some responsibility tonight.”

As of press time, official game statistics were unavailable. Reporter Phil Perry can be reached at 304-307-2401 or pperry@hdmediallc.com.